While government drags its feet, religious radicalisation is tearing away the fabric of the society 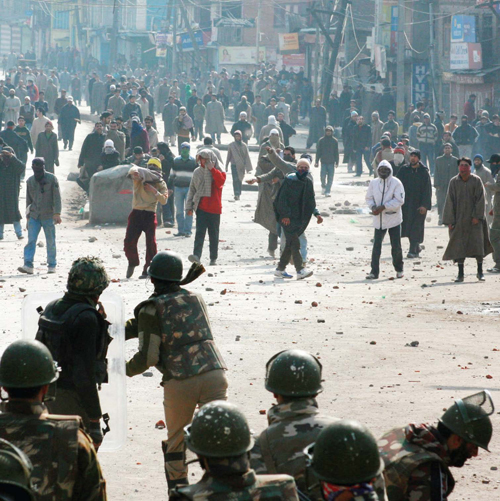 By the first week of July 2013, it appeared that the fears of a washed out tourist season in Kashmir were unfounded. Sure there were massive cancellations after the government of India decided to hang Afzal Guru despite the advice of Jammu and Kashmir chief minister Omar Abdullah in the beginning of the tourist season, but within a few weeks of the hanging, bookings resumed and the peripatetic Indians started swarming the Valley.

Then reality struck. On July 17, a few Border Security Force (BSF) personnel had a scuffle with a person who happened to be a relative of a priest of the local mosque in Ramban, south of Pir Panjal. The kerfuffle led to the BSF men to chase the person back to the mosque. In the ensuing commotion, the devotees in the mosque felt that the BSF personnel had shown disrespect to the copy of the Quran. Or maybe it was just a rumour. However, the following day, a crowd collected outside the BSF location in Ramban protesting desecration of Quran. Some started pelting stones. Obviously, the BSF men couldn’t have thrown stones back at the crowd. They don’t train in stone-pelting. They did what they know. They fired at the crowd to disperse it.

While the bullets killed four protestors and injured many more, they also shattered the thin veneer of normalcy. Towns on both sides of the Pir Panjal erupted in protests. Curfew was imposed. The tourists and the Amarnath pilgrims were stranded in various places of the Valley. Kashmir, once again resembled a war zone, if only for a couple of weeks, but those were enough to disrupt the daily lives of the people; and to remind them how national security doesn’t imply security of their lives.

As usually happens in Kashmir, the BSF first raised the bogey of national security accusing the local with whom the scuffle happened of suspicious activities. Subsequently, it blamed the J&K police for first starting the fire. The police blamed it back. The BSF then ordered an internal enquiry and promptly exonerated itself. Subsequently, even as the state government ordered a magisterial investigation, the Union ministry of home affairs also gave assurances of holding an impartial enquiry.

Since the BSF enquiry has already absolved it of any wrong-doing, it is obvious that the state government’s investigations will be at variance with the BSF’s. And most probably, the Union government’s enquiry, if that happens too, will pin the blame on one junior officer or a trigger-happy non-officer.

Even as the incident will be added to the already very long Kashmiri narrative of brutality, torture and killings by the Indian security forces, the Kashmiris, the security forces and the Government of India know that this is not the last such incident. In Kashmir, the fancy-sounding assertion — zero tolerance for human rights violation — means that the security forces will try to kill less and the government will order an enquiry with alacrity. It does not mean that killing of innocents will stop or that the guilty will be punished.


In the last decade, small, measured steps, is what the government has been taking in Kashmir; both forward and backwards, so that the ground position doesn’t change. Theoretically, there has been a lot of movement, policy statements, task forces, committees and sub-committees since 2003, but on the ground, the realities have remained unchanged. The Union government and its representatives have held several rounds of talks with various people in the state, from politicians to truck drivers. Thousands of pages of documents have been compiled on who wants what and what the government should do. Several roadmaps for permanent peace have been prepared, hundreds of memorandums have been submitted; yet, all of them lay gathering dust in Delhi.

The most recent such document was the over 100-page report of the three interlocutors appointed by the Government of India, who spent several months talking to a cross-section of people in the state. The report, which was submitted to the ministry of home affairs in 2011, was subsequently uploaded on its website last year. At that time, it was thought that the government wanted wider opinion on it before tabling it in Parliament. But nothing has been heard of it since. Interestingly, the report does not offer anything radical or unconstitutional. Charting the middle path, it draws extensively from all past documents, including the recommendations of the working groups created by the UPA I government following the second round table conference with the Kashmiri leaders in May 2006. Yet, keeping that report aside, the government has once again asked the Separatist politicians of the state to give a memorandum of their demands.

Seen in retrospect, it appears that in its first tenure Manmohan Singh’s government was probably keener on resolving the Kashmir issue or at least reach some kind of mutually acceptable (to all stake-holders including Pakistan) agreement for peace in the state. Even as the government was engaging with the Kashmiri leaders of all hues, it was parleying with Pakistan. Unlike his predecessor, Atal Behari Vajpayee who made the sweeping statement of talking to everyone within the boundaries of humanism (not merely Constitution), Manmohan Singh aired the idea of making boundaries — in this case, Line of Control — irrelevant.

Buoyed by the enthusiasm of Pakistan President Pervez Musharraf, Manmohan Singh went along with what came to be known as Musharraf’s four-point formula for Kashmir resolution without any territorial changes. While Musharraf claimed in 2010 that both India and Pakistan had come within the signing distance of the agreement on Kashmir, the Wikileak documents in 2011 corroborated this. Apparently, Manmohan Singh told the visiting US delegation in 2009 that the two countries were very close to an understanding on Kashmir before Musharraf’s government ran into trouble in 2007. Importantly, there was a near-unanimity amongst the Kashmiri leaders also on the resolution agreement.

In a talk in Delhi in August 2006, former Israeli foreign minister, Shlomo Ben-Ami, described the failure of the Camp David summit between Prime Minister Ehud Barak and Palestinian leader Yasser Arafat in the following words: ‘We touched heaven with the tips of our fingers, but we failed to grab it’. This sentiment echoes in Kashmir too, because after this whole-hearted effort the government either lost the stomach for resolution or discovered the benefits of non-resolution.

The optimism of 2006-2007 collapsed in the heap of dead bodies as a spiral of violence gripped Kashmir over the next three summers starting 2008. The completely unnecessary Amarnath land row in 2008 brought regional fault-lines between the Jammu region and the Valley to the fore. The following year saw pitched street battles between the Kashmiri youth on one side and the police/CRPF on the other. The disappointment, anger, frustration reached boiling point in the summer of 2010 when over a 100 civilians were killed in three month cycle of stone-pelting and police/CRPF reprisals, following which the government appointed three interlocutors to understand why Kashmiris were angry and what they wanted. When the interlocutors answered these questions nearly a year later, the government junked them.

Meanwhile, the 26 November 2008 attacks in Mumbai (trail of which led to Pakistan’s ISI), put the composite dialogue with Pakistan in cold storage, at least for a few months. India finally relented a little less than two years later, but dialogue focussed on issues other than Kashmir. Probably it made sense too. With Musharraf out of the picture and an unstable democratic government, bent upon junking most of his initiatives, there wasn’t much one could talk on Kashmir.

But this was also the time when Kashmiris were most disillusioned with Pakistan and had come out to vote in huge numbers in the 2008 assembly elections. Cynics say that not much should be read in the participation of the Kashmiris in electoral process, because to a Kashmiri elections have no bearing on the resolution of Kashmir. Even as they elect a state government for administrative reasons, their sentiment for azadi remains.

Perhaps, there is some truth in this. But another truth is that irrespective of Pakistan, the people of Kashmir wanted vindication of their faith in Indian constitutional structures like the judiciary and the legislature. They wanted the Government of India to make good its various promises over a period of time, the biggest of which was the review and phased revocation of Armed Forces Special Powers Act (AFSPA) which is considered the reason for all human rights violations. And in this not only has the government failed the people of J&K, it has failed itself.

The story of AFSPA is also a bit like J&K; constantly being referred to committees. The UPA I government had constituted the Jeevan Reddy Committee to review AFSPA in 2004, after violent (and peaceful as well) protests against it in Manipur boiled over. The committee included a retired Lt Gen, who noted his disagreement with the other members. But since majority view prevails, the committee apparently recommended repeal of the Act in 2005; ‘apparently’ because the report was never made public nor tabled in Parliament. Since then, various judicial commissions, investigating cases of human rights violations in J&K (Justice Verma on Pathribal killings) and the Northeast (Justice Hegde on fake encounter in Manipur) have consistently recommended repealing this Act which according to them goes against all democratic values of the country.

Yet, all these recommendations and protests boomerang against the impregnable wall of security concern that the Indian Army has built around itself. On Kashmir, the army maintains that as long as Pakistan is a factor, AFSPA should not be revoked. Ironically, the government now insist that Kashmir is an internal matter.

Meanwhile, as the government and army figure out who all are ‘factors’ in Kashmir and must be taken into account, the situation in the Valley is changing subtly but definitively. Sectarian fissures are adding to the communal wounds inflicted by the years of brutalisation. Religious radicalisation is eating into the fabric of the society that once celebrated its syncretism. By the time, Government of India makes up its mind, a lot that is good in the Kashmiri society would be lost forever.