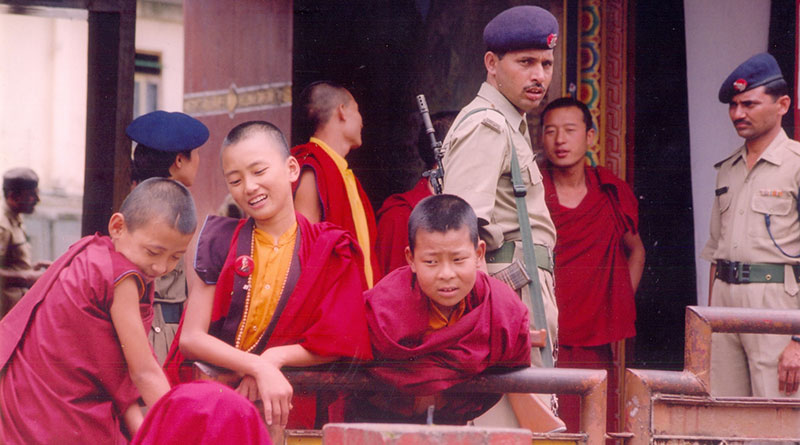 To mark the first anniversary of FORCE in August 2004, we decided to turn east. FORCE visited Sikkim in July 2004, an area with the highest concentration of troops in the world. In the week that we spent there, FORCE travelled to both Nathu la and North Sikkim. The result was this comprehensive cover story, spanning past, present and the future. Read on

A clear morning in the monsoons is a blessing in Sikkim. And given that such blessings are usually in short supply, each is cherished. Low-lying clouds and fog that hovers deep in the Valley, continuously threatens to rise and block everything out of sight. And frequently it turns out to be more than an empty threat. Even when the morning begins warm and clear, the rain clouds start gathering towards noon casting a dull grey all across the landscape effectively ruining the day.

The morning of July 13 began with the same promise in the capital city Gangtok. Sun was peeping weakly from behind the clouds, the roads were relatively devoid of puddles formed by the night-long rain and it seemed that the entire city had descended on the streets. The cars were jammed in a single file on one side, with drivers waiting patiently for the crowd to disperse. But it was not an ordinary crowd. Women, dressed in traditional fineries with heavy jewellery and make-up carrying flowers, were walking down the streets in some kind of informal parade along with a few men. A couple of tableaux were parked on one side. Our driver was a Sikkimese Buddhist of Tibetan origin. Photographs of the Dalai Lama with the 17th Karmapa (Urgyen Trinley Dorje), adorned the dashboard of his car. On the right side of his windscreen, he had stuck posters proclaiming ‘Free Tibet’ and ‘End the Occupation of Tibet’. Leaning across the window, watching the procession dispassionately he volunteered, “This is Bhanu Jayanti parade.” What is Bhanu Jayanti? He shrugged, “That I wouldn’t know.” Was Bhanu a political or a spiritual leader? The answer was the same indifferent shrug. Given the scale of celebrations, the curiosity increased. But even the locals, who had come out to watch the parade, were ignorant about the identity of Mr or Mrs Bhanu and the reason for the festival. The parade culminated at a place called Zero Point in central Gangtok (if a place can be called that given the mountainous terrain) and the traffic was finally allowed to move. Later in the day, in an interaction with a few army officers posted in Gangtok we asked about the festival. “It must be something local. But it is not a state holiday for sure,” said one officer.


The following day’s Sikkim Express tabloid finally lifted the veil of ignorance. The festival commemorated the Nepali poet Adikavi Bhanu Bhakta Acharya and is indeed a state holiday. What’s more, this year the state government decided to hold a three-day celebration to mark his 190th birth anniversary, which culminated in the felicitation of 60 Nepali speaking achievers from various fields including film actors Mala Sinha and Danny Dezongpa and football player Bhaichung Bhutia by the chief minister. The stars had descended on the state capital on July 14, but the people remained oblivious. No hysteria or excitement was displayed by the locals during the three-day extravaganza. “People here are very simple,” explained one of our escorts. “They are more concerned with their day to day living then anything else, which probably explains the low-key response to the festival.”

However, simplicity cannot explain why despite the agreement on opening the trade route through Nathu la following the then Prime Minister Atal Behari Vajpayee’s visit to China last year, one sees no frenetic activity among the people to take advantage of the long-awaited opportunity. With the ambiguous acknowledgement by China that Sikkim is a part of India and the agreement to reopen the ancient silk route which was to start functioning at least symbolically by July 2004, one expected a little more by way of infrastructure development. It is understandable that the change of guard in New Delhi could have put things on a slow track, but for that something had to be moving first. The Jawaharlal Nehru Marg that connects Gangtok with Nathu la is still a single lane black-top road with no signs of expansion, an alternate road or the infrastructure needed for the up-coming trade. The army installations line both sides of the road which throws up beautiful surprises on and off by way of colourful mountain flowers. Clearly, for the army, the trade route is not opening in a hurry. Yet, within the political circles in Sikkim one heard the buzz about the potential of trade through Nathu la; about Chinese using the Calcutta port for its exports; and Indian goods flooding the Chinese markets and so on. They admit, it is going to be border trade to start with, but it will eventually culminate into transit trade. Unfortunately, the history of the moment is lost on a visitor because there appears to be little convergence of hopes and deeds on the ground. In the one week that we spent in Sikkim we realized that just as there are two kinds of people (broadly-speaking), Tibetan-origin and Nepalese-origin, there are two points of view, the state government’s and the army’s which define Sikkim. Sure, there are meeting grounds – the chief secretary, S.W. Tensing says, “In Sikkim, the relations between the army and the civil population are the best in the country,” – but convergence gradually melts into divergence.

Through the centuries, Sikkim has attracted nibblers

The 1993 agreement adds to woes of the Indian Army

While PLA builds capabilities in Tibet, India watches on the sidelines

India should focus on improving its border management against Tibet

I Want Sikkim to Remain an Oasis of Peace

Chief minister Pawan Kumar Chamling is an icon in Sikkim. He peers down from street hoardings, his face smiles from the front pages of the local newspapers and his name is reverentially invoked in conversation by the local population. Given that he is currently running his third term in a row since his Sikkim Democratic Front (SDF) came to power in 1994, his popularity is on an all-time high. As usually happens with icons, innumerable stories about him float around in the mint fresh air of Sikkim. A famous one goes that when he was a member of the legislative assembly in 1993 he raised his hand in the house to make a point. However, the Speaker, under the influence of the then chief minister, Nar Bahadur Bhandari, disallowed him from speaking. Chamling took out a candle from his pocket and went around the house as if searching for something in candlelight. He ended his search by coming to the well of the House and saying in a clear voice, “I am looking for democracy in this House. Since it is not here, perhaps it is in the pockets of the chief minister.” A direct consequence of this cry for democracy was that his one-year-old party, SDF, swept the polls in 1994 and has been in power since. Born in 1950, to Nepalese-speaking parents, Chamling has authored a number of books, both in verse and prose. Apart from that, a few volumes of his collected speeches are also available. A recipient of a number of awards, including Chintan Puraskaar in 1987 for poetry, Bharat Shiromani in 1996 for national integration, public welfare and strengthening democracy and the Greenest Chief Minister of India in 1998, Chamling has successfully created an image of a visionary that elevates him from the status of a mere politician. He spoke to FORCE about the opening of the trade route and other issues related to the development of this border state.