Various defence exercises across the world have been deferred or cancelled

On the night of 20 April 2020, the impact of Covid-19 on geopolitics became crystal clear as the US crude prices plunged to their lowest levels in history. Starting at an already record low of below USD5 on April 20, the US benchmark WTI oil price closed at negative USD37.63/barrel. The slashed prices sent shock waves across the oil industry. 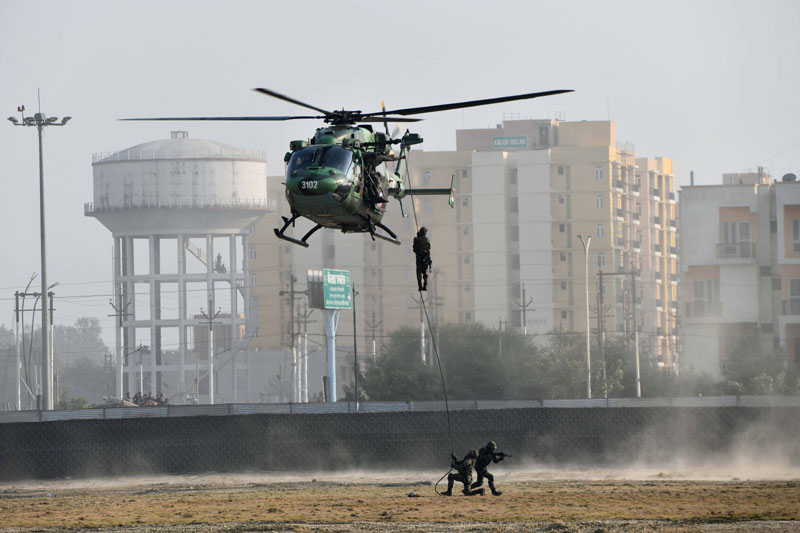 However, it was in the first week of March that the Covid-19 outbreak started to appear as a potent catalyst to alter military and geopolitical state of affairs. A small initial manifestation was seen in the postponing of Milan 2020 and then US defence secretary postponing his three-nation visit—India, Pakistan and Uzbekistan in March. The reason cited by Pentagon press secretary Alyssa Farah was to “help manage the (US) Department of Defence response to coronavirus” in America.

When the Indian Navy announced on 3 March 2020 to postpone the 13th edition of multilateral exercise Milan 2020, little was known that a similar fate awaited other global military drills too. The pandemic has not only left the economy reeling and our social lives disrupted but has also jeopardised the annual military calendar, forcing the armed forces to rework on it–perhaps later.

“All exercises have been postponed as of now,” said ADGPI Col P.K. Sharma. All the military exercises which India was scheduled to conduct this year or conducts annually with the militaries of other countries remain suspended till further orders.

More than 50 exercises had been planned for 2020 by ministry of defence (MoD) in consultation with the ministry of external affairs (MEA). The 2020 list had included military exercises with countries like the United States, United Kingdom, Russia, China, Nepal, Malaysia and France to name a few.

Military exercises — bilateral or multilateral — are a key confidence building measures where war scenarios are simulated to check combat-readiness, establish interoperability, enable information sharing and understand functioning of each other’s defence equipment. While the assessment of war preparedness through mock drills took a backseat this year, the armed forces around the world have risen to the occasion and actively engaged in Humanitarian and Disaster Relief (HADR) operations in order to contain Covid-19.

The navies of as many as 30 countries were to partake in Milan 2020 which was scheduled to be conducted from March 18 to 28 at Visakhapatnam. Over 41 countries were invited. In response to a question if the preparation and resources in calculating logistics had been wasted, an officer denied it. “Since all the planning and coordination has already been done, once the situation improves, things can now be done swiftly. So, in a sense, the effort has not been all a waste,” he said. Countries invited to participate in the exercise included Russia, Iran, Indonesia, Maldives, Australia, Somalia, Kenya, Mozambique, Sudan, Qatar, Thailand, Malaysia, Egypt, France, Sri Lanka, Vietnam, Myanmar, New Zealand, Israel, Tanzania, Comoros, Seychelles Brunei, Philippines, Madagascar, Saudi Arabia, Oman, Mauritius, Cambodia, Singapore, South Africa, South Korea, Kuwait, Djibouti, Bahrain, UAE, Eritrea and Bangladesh.

There is no clarity on the next date for the exercise with the Indian Navy looking forward to “scheduling Milan at a later convenient date.” An officer from the armed forces said, “National strategies are not affected by days; the health of the population should take preference over defence in my opinion.”

Between January and February 2020, India conducted a total of five military exercises which are as follows – Ajeya Warrior 2020 and the Indradhanush 2020 with the UK; Sahyog-Kaijin with Japan, Sampriti-IX with Bangladesh and Bimstec disaster management exercise with Sri Lanka, Myanmar, Nepal and Bangladesh.

The Indian Air Force (IAF) and Royal Air Force (RAF) jointly commenced the fifth edition of Ex Indradhanush at Air Force Station Hindan on 24 February 2020. The focus of this edition of the exercise was ‘Base Defence and Force Protection’. According to a statement from the MoD, this theme is of “significance considering the recent threats to military establishments from terror elements.” The exercise formally concluded on 29 February 2020.

India and Japan on 16 January 2020 took part in a five-day joint exercise called ‘Sahyog-Kaijin’. The exercise was held between the coastal guards of the two countries at the Chennai port.

The armies of India and Bangladesh participated in joint military exercise Sampriti-IX at Umroi, Meghalaya. The 9th edition of the joint military drill was held from 3 February 2020 to 16 February 2020. The exercise allowed the two armies to understand each other’s tactical drills and operating techniques. “The exercise provided an ideal platform for the personnel of the two countries to share their experiences on counter insurgency, counter terrorism operations and providing aid to civil authorities for disaster management, especially in jungle and semi-urban terrain,” said the defence ministry.


Seven-nation Bimstec Disaster Management Exercise 2020 was held from 11 February to 13 February 2020. Sri Lanka, Nepal, Bangladesh, Myanmar and India participated in the exercise which was held at Puri in Odisha. Bhutan and Thailand did not participate this time.

A heli-born rescue operation was carried out to demonstrate the coordination among various stakeholders in dealing with emergency situation. According to a statement from the MoD, “For this Exercise, a Communication Centre, Emergency Operation Centre (EOC), Base of Operation, Medical Camp, Facilitation Centre, Media Enclave etc. were established by the NDRF as per the International Search and Rescue Advisory Group (INSARAG) guidelines for familiarisation and exercise purpose.”

Everything was going as planned and then owing to Covid-19 outbreak, there were series of delay and cancellation. On March 27, French Land and Airland Defence and Security Association GICAT and its subsidiary COGES announced calling off the 27th edition of Eurosatory 2020 which was scheduled to take place from June 8-12. The move came after the cancellation of the Farnborough International Airshow 2020 which was due to take place in July.

The Indian Army has already postponed all its courses that were due to commence from 20 March 2020. Courses already in progress continued with ‘precaution.’ The army has also cancelled non-essential training, conferences and movement.

The Indian MoD, which started working with its full strength from 20 April 2020 amid the extended lockdown till May 3, has pushed back the deadlines for capital acquisition to June. “In view of continuing extraordinary circumstances owing to Coronavirus (Covid-19) outbreak, it has been decided to further extend all dates of submission of responses to Request for Information (RFI), Request for Proposal (RFP) and Expression of Interest (EOI) due in March, April and May to 01 June 2020,” read a statement from the defence ministry.

In India, the first case of coronavirus came to light on 30 January 2020 and the first phase of lockdown began after Prime Minister Narendra Modi on 24 March 2020 announced that people would have to remain in their homes for the next 21 days, with only essential services remaining open, putting a country of 1.3 billion people under lockdown. Unfortunately, during this lockdown, defence manufacturing was not listed as an essential service.

The dire impact of coronavirus is rampant across the world militarily, economically and politically. The US remains split on the timings of RIMPAC 2020, the Rim of the Pacific exercise, which is the world’s largest international maritime warfare exercise. RIMPAC is held biennially during June and July of even-numbered years at Honolulu, Hawaii. The US has confirmed more than 7,00,000 Covid-19 cases and over 42,000 deaths at the time of filing this report, hence an increase in the number is likely. What is striking is that the US Indo-Pacific Command has cancelled Exercise Balikatan 2020, scheduled for May 4-15 in the Philippines but RIMPAC 2020 is still on the cards.

“RIMPAC is on. RIMPAC is going to happen absolutely positively until you read publicly it is not. Once big navy decides whether or not it’s going to happen, you will hear about it in the open press,” Hawaii News Now quoted commander of Joint Base Pearl Harbor-Hickam Capt. Jeff Bernard as saying.

India, along with 25 other countries, had participated in RIMPAC 2018 which saw more than 45 surface ships and submarines, 17 land forces, over 200 aircraft and 25,000 personnel. 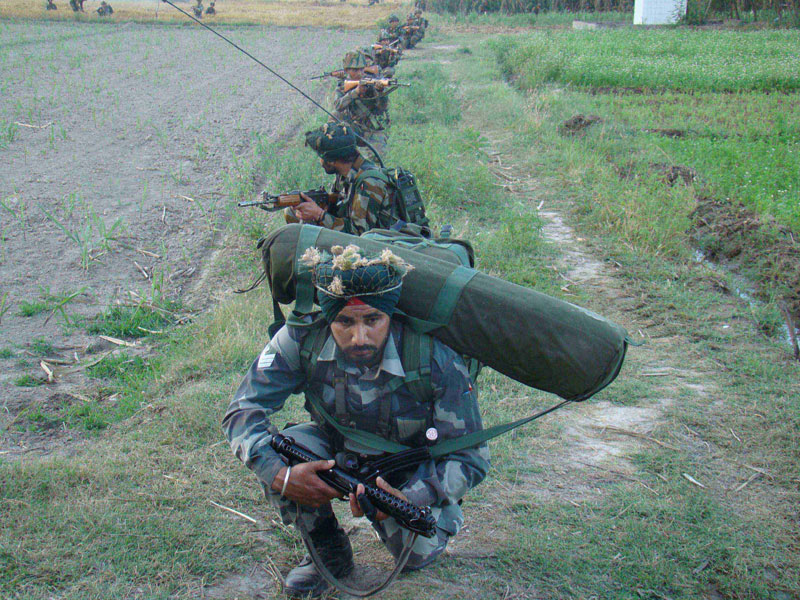 As and when the lockdown is lifted, the fate of following exercises is yet to be seen.

Exercise Hand-in-Hand: An India-China joint military drill which is held annually. The 8th India-China joint training exercise Hand-in-Hand 2019 on the theme counter terrorism under United Nations mandate was held at Umroi, Meghalaya from 7- 20 December 2019 at company levels, which means that around 100-120 infantry troops from both the countries participated. It was based on counter-terrorism and HADR operations. In 2018, the exercise was held in December at Chengdu, China. The Indian Army’s 11 SikhLi and Tibetan Military District of the People’s Liberation Army had participated in the exercise. The exercise didn’t take place in 2017 due to the 72-days long standoff between Indian and Chinese troops in Doklam.

Exercise Surya Kiran: It is held between the armies of India and Nepal. In 2019, it was held in December at Nepal Army Battle School (NABS), Salijhandi, Rupendehi district of Nepal and in June 2018, it was held at Pithoragarh, Uttarakhand. It is an annual event that takes place in India and Nepal alternatively.

“The aim of this exercise was to conduct a Battalion level combined training between Indian Army and Nepal Army to increase interoperability in jungle warfare and counter terrorist operations in mountainous terrain, humanitarian assistance and disaster relief, medical and environmental conservation including aviation aspects,” the Indian MoD had said in 2019.

Exercise Varuna: It is held annually between the Indian and French navies. In 2019, the first part of the joint naval exercise, Varuna, was held from May 1-10 off the Goa coast, while the second phase was scheduled for later in the month of May in Djibouti which is located in the Horn of Africa in East Africa.

“Having grown in scope and complexity over the years, this exercise exemplifies the strong relations between the two nations, in line with the Joint Strategic Vision of India-French Cooperation in the Indian Ocean Region,” the Indian Navy said of Exercise Varuna in a statement. “The exercise underscores the shared interests and commitment of both nations in promoting maritime security,” it added.

Exercise Garuda: A bilateral Indo-French air training exercise. In 2019, it was conducted from July 1-12 at Mont-de-Marsan France, with the IAF contingent landing back in India on 19 July 2019. Exercise Yudh Abhyas, Vajra Prahar and Tiger Triumph, were held between India and the United States. Exercise Mitra Shakti VI is conducted between the Indian Army and Sri Lankan Army. It took place from March 26 to April 8 last year in 2019 at Diyatalawa Parade Ground in Diyatalawa, Badulla District, Sri Lanka. The primary focus of the exercise was to train and equip the contingents to undertake joint counter insurgency and counter terrorist operations in urban/ rural environment under the United Nations flag.