Srinagar: It is safe to say that Professor Abdul Ghani Bhat, who juggles several hats at the same time, has busted all the stereotypes associated with old age. Easily a septuagenarian (or more), Bhat continues to think, imagine, analyse and articulate his views no matter how much they differ from conventional wisdom. Most importantly, inflexibility of ideas, the bane of old age, has simply passed him by. Bhat not only has been able to intellectually keep pace with changing circumstances, often he manages to jump ahead of foreseeable events. 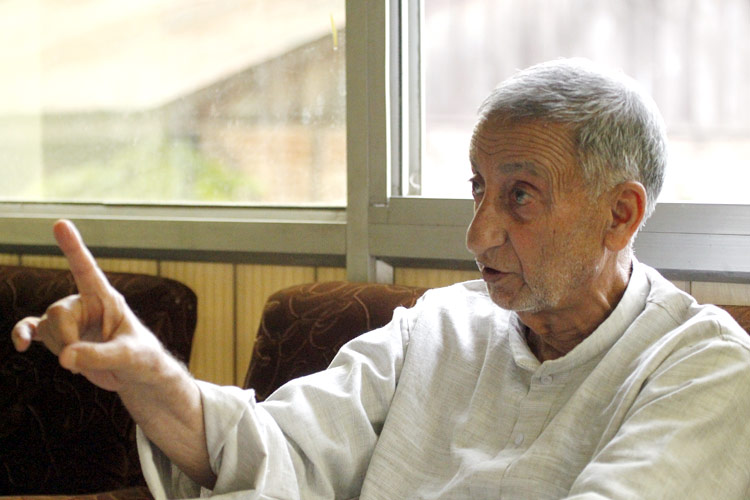 While most analysts saw a thaw in Ufa, Russia, when Prime Minister Narendra Modi spent some quality time with his Pakistani counterpart Nawaz Sharif on the side-lines of Shanghai Cooperation Organisation (SCO) and BRICS (Brazil, Russia, India, China and South Africa) summits and delivered a joint statement, Bhat sees a new Asian security framework midwifed by Russia and China.

“The Russia-China-India-Pakistan-axis is very significant,” he says. “Overtime, Iran will also become part of this. And gradually, the US will be elbowed out from this region.” Bhat loves drama and the flamboyant flourishes that follow his sentences. So, having said this, he pauses to see the impact of his words.

“Kashmir is the only issue that defines India-Pakistan relationship. If this is resolved to both parties’ satisfaction, then everything else will follow: trade, Sir Creek, Siachen, even terrorism. Everything is peripheral to the Kashmir issue,” he says, building-up on his theory.

“Imagine the economic opportunities that peace between India and Pakistan will open up for this entire region. From Iran to China, and may be beyond, encompassing Afghanistan, the Central Asian Republics and Russia. The China Pakistan Economic Corridor (CPEC) can only realise its full potential if the Kashmir issue is resolved,” he pauses again, either to collect his thoughts or to give the listeners a moment to absorb what has been said so far.

And then the rabbit comes out of his hat. “Russia is deeply involved in persuading India to talk with Pakistan,” he says. “Russia is also persuading both countries to resolve the Kashmir issue for greater regional cooperation. If you have the foresight, you can see how India-Pakistan joining the SCO as formal members fit in and how Iran will become a part of this.”


Essentially, what Bhat is suggesting is this: Finding itself largely isolated in the West (especially after Ukraine), Russia, under President Putin, is working hard to construct a new economic and security framework to challenge what seems to be the US’ hegemony in Asia; including on international institutions. The biggest road-block to this is India-Pakistan acrimony, which stems from Kashmir. Since China couldn’t have played the honest broker in this, given its close relationship with Pakistan and vested interests in Kashmir, Russia has assumed that role.

But how can he be so sure about this? Bhat smiles mysteriously.

Shorn of his exaggerated scenario-building, this theory does make sense when seen from a distance and benefit of hindsight. In the last few years, there has been a warming of relations between Russia and Pakistan, despite the fact that Russia still does not sell any military equipment to Pakistan. Of course, indirectly the hardware and technology does reach Pakistan through China. This warming up reached its first milestone when the two countries signed a military cooperation agreement in November 2014, during the first-ever visit of Russian defence minister, Sergey Shoigu, to Islamabad.

Since then there have been reciprocal visits by ministers and service chiefs on both sides, culminating in the visit of Pakistan Army chief, General Raheel Sharif in June 2015. Among other things, the two sides agreed to hold an army-to-army exercise later in the year. Russia also announced building a gas pipeline in Pakistan at the cost of USD 2 billion from Karachi to Lahore.

Despite all this, Russia has been at pains to underscore the importance of its relationship with India. It has repeatedly assured India that it will not sell anything to Pakistan that has the potential of compromising India’s national security. Meanwhile, after calling off foreign secretary level talks last year with Pakistan, India has resumed back-channel communication with both Pakistan and some Separatist politicians in Kashmir.

More importantly, after the recent terrorist attack in Gurdaspur, when the Indian security agencies once again went public with equipment found on the terrorists nailing Pakistan, Union minister for home affairs Rajnath Singh made a very unusual statement. He warned Pakistan of retaliation in case India was provoked, implying that Gurdaspur attack was not provocation enough. Given that in the past, much less had provoked this government, clearly the restraint is not self-imposed. Is Bhat really on to something?

Contrary to popular analyses, Russia is not doing the balancing act between India and Pakistan because it wants to open a new market for its military hardware. It is doing so for a purpose: to reclaim some amount of global influence and stature which was lost after the collapse of the Soviet Union. It couldn’t have done that alone, but with China as a collaborator, it has embarked upon an ambitious plan of refashioning the economic-political alignments in the east. This is also when Russia worries about China’s growing influence in what it considers its soft underbelly — Central Asian Republics.

“Nothing comes from nothing,” Bhat says. “Work for the meeting at Ufa would have gone on for several months. What makes you think that the Pakistan Army chief General Raheel Sharif was not in the picture? Wasn’t he in Russia a month back? Wouldn’t the Russian leadership have spoken with him? I think the Pakistan Army is supportive of Nawaz Sharif-Narendra Modi talks in Ufa and what they have laid out in the joint statement.”

According to Bhat, Kashmir remained unmentioned in the joint statement owing to India’s sensitivities. After all, from not talking at all, you can’t sway to the other extreme and start talking Kashmir! “But Kashmir will be there in ‘all outstanding issues’,” he says. “After all, what is the way forward, except dialogue? And dialogue can only move forward if both parties are flexible.”

“Nobody is talking to me. I cannot say about others,” says Bhat, pausing once more before dropping his next bomb.

“Kashmir is a bilateral issue between India and Pakistan. Only they can resolve it,” he says.

If that is the case, why did the Hurriyat Conference insist all these years that the Government of India talk to them about Kashmir resolution? And even when they did talk, what did they hope to achieve, if they were not a party to the dispute? 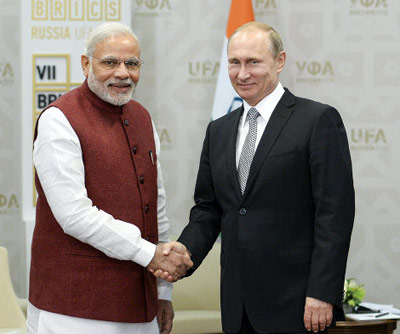 “We are the affected party. We have suffered and continue to do so. But when we kept talking about freedom, nobody paid heed,” Bhat says. “So I have come out of a dark tunnel and I believe that even if there is no light right now, there will be light eventually. If the Kashmir issue can be resolved bilaterally by India and Pakistan, keeping the sensitivities and aspirations of the people of Kashmir in mind, I have no problem. We are not a sovereign state, hence we cannot expect the seat at the high table.”

After a brief pause, Bhat added two qualifiers to his almost revolutionary statement. One, given that he preaches flexibility he has to show flexibility in his thoughts to stay relevant. And two, these were his own views and not of the Hurriyat Conference. “I only represent myself,” he declares.

Apparently, the Hurriyat Conference still holds the same position that it did a decade ago. It insists on the recognition of all United Nations Security Council resolutions on Kashmir. It insists on right to self-determination. And it talks of a negotiated settlement through tripartite talks between India, Pakistan and the people of Kashmir.

After all these years, Bhat says that he has realised that there is no one who can be called representative of all the people of Kashmir. “There are as many views as there are leaders,” he says. “Geelani sahab has his own views, Mirwaiz has his views. Where is the meeting ground?”

What about the state government?

“The state government is not representative of the people, because it is not the product of dispute. It is the product of a compromise by the government of India,” he says, adding, “The local politics of Kashmir does not address the collective discontent of the people.” There is a reason why Bhat doesn’t hold the state government as being representative of the people. “In the last 60-odd years, people have voted for the Congress, the NC and the PDP. I believe now the Bharatiya Janata Party (BJP) is pumping-in a lot of money in the state, so it won’t be surprising if people vote for it too. Yet, they will still come out and raise the slogan of azadi on the streets. The lesson of the last 60 years is, the money wins elections, but it does not win over the people.”

Bhat says that he has a lot of hope from the Ufa meeting, because for the first time he sees a convergence of interests of several countries in the region, all of which is contingent upon peace between India and Pakistan.

“Politics is the art of choosing between what is unpalatable and what is disastrous,” says Bhat underlying his optimism. “Moreover, we live in an interdependent world. India’s economic growth cannot be delinked from the neighbourhood. After all, for growth, you need stability; and for stability, you have to resolve disputes.”

Such is Bhat’s enthusiasm with the outcome of Ufa, despite a clear lack of zest in both India and Pakistan that he has set to work chiselling a proposal for resolution. “It is a bit premature to talk about it,” he insists, “but it essentially draws from the Musharraf formula, which got all-round acceptance.”

Has somebody asked him to make the proposal?

“When the time comes, they will ask,” he says enigmatically.

The Minister Is In

Sajad Lone brings his trademark exuberance to his ministry 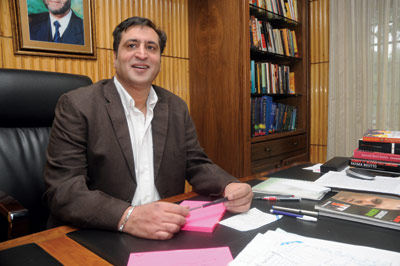 Bhat is not the only one who is sensing a change bubbling just below the surface of the routine, everyday politicking. On the other side of the spectrum, the man whose life has come full circle, at least figuratively, is also brimming with ideas. For someone who took nearly a decade to take the electoral plunge, Sajad Lone has taken to his office like fish to water.

Alleged to have been miffed by the supposed light-weight portfolio of science & technology and animal husbandry, Lone has eased into his new job with childlike enthusiasm, thereby reinforcing the saying that if you have ideas you can make anything work. He is busy preparing a blueprint at the moment for the animal husbandry ministry to create collective farms for sheep and cows on the lines of the ones he had seen in New Zealand. Through these he hopes to generate not only employment in the state but also revenue for the state government.

“It is shocking that no one ever thought of this potential before,” he says with wonderment. “Our landscape and weather is absolutely conducive for sheep and cattle rearing and yet we are not able to meet our requirements. We buy them from Rajasthan.” For him, the new government is poised to usher in an era of economic opportunities across sectors because both the ‘state and the central governments are on the same page.’