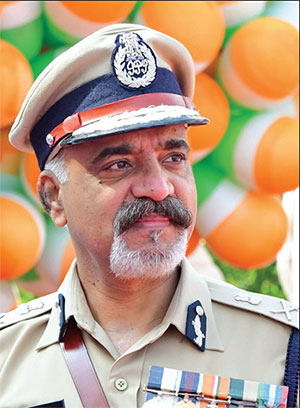 Police modernisation has been a subject of prolonged discussion for many years now. What is the status today?

Realising modernisation by or of the police forces is not a one-time goal. The police forces are required to be trained and equipped with emerging techniques and skills as and when the situation demands. Despite the fact that the ‘police’ and ‘public order’ fall in the State List of the Seventh Schedule of our Constitution, the Central government has been assisting the state police forces in strengthening their infrastructure through its various schemes.

Of all the schemes, the Modernisation of Police Forces (MPF) scheme has proved to be very useful in improving the basic security infrastructure of the police forces by making provision for procurement of modern weapons, vehicles, telecommunication, training and security equipment etc and also in upgrading state FSLs including Cyber and DNA labs. A few states have also implemented schemes like Intelligent Traffic Management System (ITMS), City Surveillance etc to provide efficient services to its citizens. The only matter of some concern is that not only the overall size of the MPF scheme is shrinking every year; the Centre-State ratio of finance sharing has also been changed to 60:40; resulting in extra burden to the states’ exchequer.

The Central government has also, inter alia, implemented its mission mode project - Crime Criminal Tracking Network and Systems (CCTNS) across the states to computerise and network all police stations of the country to improve transparency and accountability. This project has now made it possible to search the antecedents of a suspect or details of a vehicle involved in crime against the whole national database. The Supreme Court’s (SC) directive to upload FIRs within 24 to 72 hours on the official website could be executed only because the CCTNS platform was already available, and the states had to just develop an additional application.

The recent launch of the ‘one emergency number - 112’ across the states for citizens (instead of 100 for Police, 108 for Ambulance and 101 for Fire) to reach out to any of the emergency services like police, fire or health, is another feather in the cap of the government. Here also, the Central government has extended some financial assistance to the states. The C-DAC has helped in developing a unique mobile application ‘dial-112’ so that a citizen (of any state) in need can avail of an emergency service in any of the states irrespective of the variety of system integrators (SIs) implementing such emergency handling projects in different states.

Therefore, there might be infrastructural gaps in states due to ever-growing manpower and new challenges, the Central and state governments are continuously engaged in strengthening their security apparatus so that the emerging challenges could be faced successfully.

Do you think the states are allocating enough budget for the police forces to focus on modernisation, and your assessment of their assets and weapons whether they are sufficiently equipped and trained?

The police budget, on an average, has generally remained within 3-5 per cent of the total state budget. Due to obvious reasons, the larger chunks of the budget are allocated for basic services like education, health, agriculture and works. More than three-fourth of the police budget is accounted for its establishment expenditure. Therefore, within the given budget, it is for the police chief of each state to take a decision on priorities. As a result, proper planning becomes essential for the police to achieve maximum outcome with the limited available budget.

Second, it has been noticed that, even within the given budget, the state police chiefs have less financial autonomy as compared to their counterparts in the Central Armed Police Forces (CAPFs). This may be augmented by delegating more sanctioning powers to the police chiefs, to reduce procedural delays in obtaining approvals from the government.


Third, security is not yet directly linked with the developmental works. It is never, as a policy, considered a part of development. However, a few exceptions can be seen here and there. One of the examples of inclusive planning that can be cited is the ongoing Raoghat (mining) project in Bastar. Before its field work could be taken up by any of its stakeholders, the deployment of the security forces was factored in to thwart any untoward incident. Therefore, inclusive planning needs to be done, as a matter of policy, in all large developmental projects and not on selective basis.

With the advancement in technology, newer versions of threats are continuously arising in the form of cyber-attacks, bank frauds, and organised crimes, just to name a few, which need to be tackled in a more specialised manner. National Security Advisor Ajit Doval termed this kind of war ‘fourth generation war’. Considering this vast aspect of maintaining people’s security, do you think modernisation is enough and the personnel are being adequately trained for such skills? Also, are necessary infrastructure being set up?

The capacity of the state police forces to counter cyber-attacks is gradually improving. A separate ‘Cyber and Information’ division has been set up in the ministry of home affairs (MHA) to focus on information protection and cyber security. An online portal has been developed for online reporting of cyber-crime of child pornography and rape. The Central government has provided financial assistance to the states to set up cyber forensic labs for imparting training even to their newly inducted police officers. The states have created their own specialised cyber wings, cyber police stations and cyber forensic labs to deal with the rising cyber-crime. However, more needs to be done to develop expertise and effectively tackle this new version of crime.

Similarly, the states have developed their capacity to fight terrorism. The security infrastructure of the Left-Wing Extremism (LWE) affected states has improved with the assistance of Central government’s schemes like Special Infrastructure Scheme (SIS) and Security Related Expenditure (SRE). The Central government has helped the states in setting up specialised Counter-Insurgency and Anti-Terrorism (CIAT) Schools for imparting training in anti-Maoist operations. The states have created their own specialised forces like Special Task Force (in Chhattisgarh), Greyhound (in Andhra Pradesh and Telangana), Commando-60 (in Maharashtra) and Special Operation Group (in Odisha) to undertake anti-guerilla operations against the Maoist. The intelligence agencies have also geared themselves up to counter radical elements. The states are, therefore, quite well equipped to fight the different shades of terrorism.

Looking at the rising rate of crime against women, the Central government has also set up a separate division on women safety and is continuously monitoring cases of rape, particularly under the POCSO Act, using the CCTNS platform. It has asked the states to create a special unit of investigation in each district called Investigative Units for Crime Against Women (IUCAW) and pledged financial reimbursement of 50 per cent against expenditure incurred on these units. Thus, a huge effort is ongoing to improve the capacity of the state police forces to meet newer challenges and rise to the expectations of the public.