‘The largest project under the Russian-Indian defence cooperation in aviation sector is shipment and licensed production of Su-30MKI, a multipurpose fighter jet’ 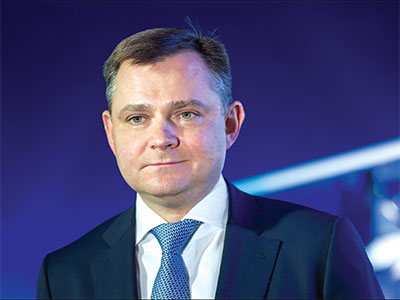 What is your assessment of the Indian market for UAC’s business in 2019?

India has for a long time been one of Russia’s biggest partners, both in procuring aircraft and other munitions and in industrial cooperation. Continuing in 2019 and beyond we see this trend to remain. While we cannot speak about volumes of market and other parameters, we see opportunities not only in selling something, but rather in the frames of the ‘Make in India’ initiative.

Currently, there is a lot of focus on indigenised production of defence equipment. How do you plan to align yourself in this environment?

India and Russia share not only one of the longest and most successful cooperation histories but are destined to continue it with even more success as the two countries work to expand bilateral ties. Moreover, UAC and Russia are pioneers – as the ones that were first to offer and later organise licensed and localised production of Russian aircraft in India.

So far, the largest project under the Russian-Indian defence cooperation in aviation sector is a programme that involves shipment and licensed production of Su-30MKI, a multipurpose fighter jet. The first batch of these aircraft created specifically for the Indian Air Force (IAF) was manufactured by the Irkut Corporation (a UAC subsidiary) in the early 2000s. Later, licensed production was launched at the Hindustan Aeronautics Limited (HAL) facilities. Later, Indian industry proceeded to manufacture Su-30MKI on its own, with Russia’s involvement gradually decreasing. Once all existing contracts are fulfilled, the majority of Su-30MKI are to be manufactured by HAL. So, we think that we are aligned almost to the maximum degree possible.

Russia is still open to have India as a partner in this programme. However, a lot of time has passed since first decisions were made and agreements were signed. Russia didn’t sit idly –the aircraft is on a final stage of military trials and UAC has signed contracts already with the Russian ministry of defence (MoD) to supply first serial aircraft this year. Obviously, since the aircraft will become operational to the Russian army, some new way of cooperation should be found.


In the context of MMRCA 2.0, how does the MiG-35 meet the IAF’s requirements? What has changed since the first MMRCA programme?

About 10 years have passed since the first tender. During this time the aircraft has further developed its capabilities, has overcome some ‘teething’ problems that are usual to new aircraft types. MiG-35 has the full set of characteristics of a 4+ generation aircraft and fully corresponds to MMRCA 2.0 requirements. UAC is ready not only to supply aircraft in flyaway condition, but also to transfer technology and documentation necessary for local production by an industrial partner in India.

What is the status of Sukhoi mid-life upgrade and what all this will involve?

Russia is ready to upgrade the Su-30MKI that is by virtue called the cornerstone of the Indian air fleet. The aircraft can and should be upgraded to meet modern requirements and encompass latest technology and munitions. And Russia is ready to offer the latest options that are available in the market. It is obviously to presume that the IAF as the customer has the discretion to determine the modernisation concept.

How is the Joint Venture (JV) with HAL for the Il-214 multi-role transport aircraft progressing?

The MTAL JV was formed to realise the joint programme to create a medium size transport aircraft. Due to several reasons the project didn’t develop further, that, in turn, has raised questions of further fate of the JV. Russia, considering that its cooperation with India has a lot of implications and new projects are appearing, did not hurry in making any decisions to close the JV that could be very useful in other projects. This issue is being discussed.

Are you looking for an Indian private industry partner for any ongoing programmes?

Yes, we are. HAL is our long-standing and reliable partner as a government organisation, we are planning to continue and develop this mutually beneficial cooperation. But we can and should expand our relations with private business as well especially in the field of our product support and spares.