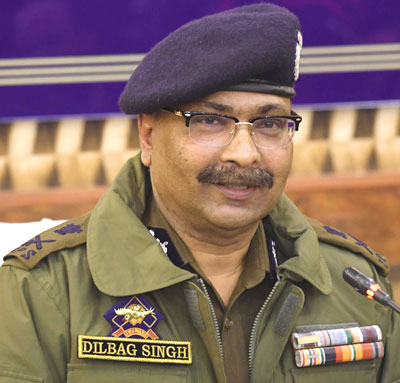 How do you assess the security situation in the Valley since 5 August 2019? In what ways has the abrogation of Article 370 and Article 35A impacted upon the Jammu and Kashmir police operations?

Security situation is well under control and we are far better today. Post abrogation, Jammu and Kashmir Police and other forces deployed in the valley have shown responsibility and professionalism in maintaining peace and order. There has been no firing to maintain law and order. The people of Jammu and Kashmir, too, have been supportive in maintaining peace. The Jammu and Kashmir Police is committed to maintain peace, law and order, integrity, sovereignty of the country and above all, to secure the safety of our people for which hundreds of officers and jawans have sacrificed their lives and will continue to do so.

There were reports that due to the lockdown that followed the abrogation, intelligence networks of the police was disrupted, which could have put the security forces at a disadvantage. How is the people-police equation now?

Lockdown or no lockdown, the Jammu and Kashmir Police is working tirelessly with the other security agencies to bring normalcy back in the region. Different situations throw different challenges but the morale of Jammu and Kashmir Police never gets affected, rather the force is more active and has strengthened its approach to deal multiple challenges at a given time. The people-police equation is at its best and safeguarding people’s lives and property has always been our top priority. Our intel network is robust. We clearly have advantages.

How strong is the separatist sentiment today? Do you anticipate enough improvement in the ground situation to merit lifting of communication restrictions in the near future?

Kashmir issue was always used by the separatists for their personal gains. The resignation of Hurriyat Chairman Syed Ali Geelani is an admission that the path was wrong and they were propagating negative thinking among the common people of Jammu and Kashmir. The situation is now being monitored on a daily basis. Different aspects are being taken into account. Keeping ground realties in view, the final call will be taken accordingly by the administration.


Media reports in the last few months suggest an increase in the intensity of violence, with security forces suffering greater casualties. What is the reason for that?

Violence has decreased and there have been fewer incidents of violence and stone pelting post abrogation, proving that the situation is improving with each passing day.

What is The Resistance Front (TRF)? Is it correct to say that TRF cadre is better trained than the other outfits and hence, have greater staying power?

There is nothing alarming about TRF as all terror activities carried out by the Pakistan based Lashkar-e-Taiba (LeT) are being pinned on the newly-formed ‘seasonal’ group in Kashmir valley and is a ploy by Pakistan to evade scrutiny at the international level. It is a bid by the neighbouring country to give different terror outfits an indigenous identity. They are all backed by Pakistan.

It appears that both north and south Kashmir have become equally volatile. How correct is this impression? What is the reason for that?

North Kashmir has been largely incident free. Yes, in recent past some terrorists have managed to sneak in some areas of north Kashmir because of which there were some terror incidents. Many of the perpetrators have been gunned down and efforts are on to track down remaining terrorists. Coming to south Kashmir, the situation is very different from what it used to be. In 2020, we have had successful encounters in which number of top commanders like Riyaz Naikoo, Abdul Rehman alias Fauji Bhai, Zubair, Qari Yasir, Junaid Sehri, Burhan Koka, Haider and Tayab Walid have been neutralised and what is encouraging is that less locals, as compared to earlier times, are getting inspired today to join terror groups.

There was unpleasantness between Jammu and Kashmir Police and the Central Reserve Police Force (CRPF) a few months ago. How would you describe the police’s relationship with Central Armed Police Forces?

Forces are working like a family for safeguarding the interests of the people and country. The CRPF is working with Jammu and Kashmir Police shoulder to shoulder almost on every front so there is hardly any room for unpleasantness between the forces as such. In addition, the synergy between the Jammu and Kashmir Police and other forces has been exemplary—the recent successes in handling different situations are a proof.

Can you give an overview of the police’s outreach among the people to reduce alienation?

Besides fighting on different fronts for peace, the Jammu and Kashmir Police has been organising various programmes across Jammu and Kashmir. In addition, many cultural and sports events are being organised to engage the talented youth and channelise their energy in the right direction. We have had successful engagements with the community. We have sent about 1,500 youth on ‘Bharat Darshan’ tour so far. Pre-Covid 19, youth/ community engagement programmes were conducted. We will carry on with such programmes when Covid-19 spread stops.