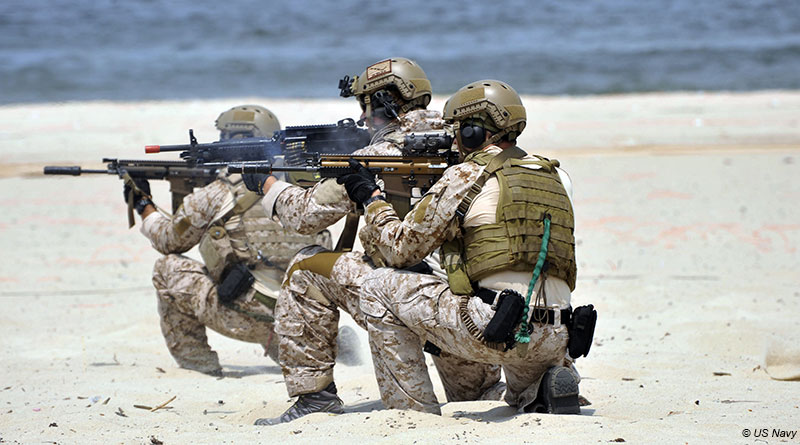 Special operations forces are playing a key role in the Iraq conflict, albeit a covert one given the secretive nature of these units. US Army Maj. Gen. Stanley McChrystal said on 4 April 2003, that the war in Iraq is supported by the largest special operations force since the Vietnam War. Anyway, they justified their employment by finally getting the biggest catch of ‘em all: Fugitive Iraqi president Saddam Hussein.

The soldiers of the US Army Special Forces, the ‘Green Berets,’ are among the military’s most versatile. Special Forces units not only train and advise troops in other countries, they also conduct combat operations. According to the US Army Special Operations Command, the units are able to perform five principal missions: foreign internal defence, unconventional warfare, reconnaissance, direct action and counter-terrorism. The backbone of Special Forces is the 12-man ‘ATeam,’ led by a captain assisted by a warrant officer. The rest of the team is composed of five pairs of sergeants trained in each of these areas: weapons, engineering, medical aid, communications, and operations and intelligence. All members are cross-trained in different skills and are multilingual. In Iraq, multiple ATeams were inserted in the country, including those that worked with the Kurdish peshmerga forces in northern Iraq to coordinate US air strikes and attacks on Iraqi army positions. In Afghanistan, Special Forces worked with Northern Alliance forces to coordinate US air strikes on Taliban and al Qaeda positions. In the Persian Gulf War, Special Forces teams were inserted deep into Iraq before the ground war to provide realtime reconnaissance and to hunt for Scud missiles in western Iraq. The unit’s motto is ‘De Oppresso Liber,’ which is Latin for ‘To Free the Oppressed’.

As with all special operations forces, the Rangers, when in hostile or war situations, report to the Joint Special Operations Command, or JSOC. They are organized into the 75th Ranger Regiment, consisting of three battalions based at Fort Benning, Georgia. The Rangers are kept at a high level of readiness and can deploy anywhere in the world at a moment’s notice. Rangers are trained in rapid infantry assault and night fighting. They are the premiere airfield seizure and raid unit in the Army. The Rangers are trained to infiltrate and exit by air, land or sea and have the capability to conduct conventional or special lightinfantry operations. In Afghanistan, Rangers participated in a night parachute jump at an airfield near the home of Taliban leader Mullah Mohammed Omar. According to the JSOC, the Rangers have taken part in every major combat operation since the end of the Vietnam War. The Rangers trace their history back to Roger’s Rangers, a group of American colonists organised in 1756 by Maj. Robert Rogers, a native of New Hampshire, to fight for the British during the French and Indian War. The unit motto, ‘Rangers lead the way,’ came after Brig. Gen. Norman Cota used that phrase to order the 5th Ranger Battalion into action during the 6 June 1944, D-Day landings at Omaha Beach in Normandy, France.

While the military acknowledges the existence of special mission units, such as Delta Force, it does not specify what they are called or their locations, staffing or organisational structure. Unofficially, Delta Force is considered one of the US military’s elite special operations units, its members drawn from all branches. It is based at Fort Bragg, North Carolina. Delta Force was created by Col. Charles Beckwith in the late 1970s and was initially based on the British Special Air Service counterterrorism unit. The composition, strength and abilities of Delta Force remain a closely guarded secret, as are its missions to date. But the unit is thought to be equipped with the most advanced weaponry and equipment the US military has to offer. Unit members undergo an extensive selection and assessment process. Hostage rescue is considered a Delta Force specialty. In 1989, during Operation Just Cause in Panama, Delta Force operatives rescued US businessman Kurt Muse from Modelo Prison in Panama City. Muse had been arrested for running a CIA-supplied clandestine radio station.

US special operations forces are often supported by the Army’s 160th Special Operations Aviation Regiment, which specializes in night flying and is known as ‘The Night Stalkers.’ Based at Fort Campbell, Kentucky, and Hunter Army Airfield in Georgia, the Regiment consists of MH-6 and AH-6 light helicopters, MH-60 helicopters and MH-47 heavy assault helicopters. The regiment was formed after Desert One, the failed 1981 attempt to rescue hostages in Iran, when the Army determined it needed a special aviation unit trained in lowlevel night operations. The unit has served in a number of combat operations, including Urgent Fury in Grenada, Just Cause in Panama, Desert Shield/Desert Storm in Kuwait, Task Force Ranger in Somalia and Enduring Freedom in Afghanistan.

SEALs, which stand for Sea, Air, Land, are the US Navy’s primary and most acclaimed special operations forces unit. Operating mainly in tight 16-man teams, SEALs train for missions in maritime environments, the desert, the jungle, in cold weather, and in urban surroundings. SEALs are trained extensively and rigorously in and around San Diego, California, and Norfolk, Virginia, to withstand and thrive in the face of personal, physical, environmental and other challenges. A final phase of their training is known as ‘Hell Week.’ SEALs trace their history to the frogmen of World War II, although new threats – including terrorism – have forced them to evolve substantially in recent years. Specially trained crewmen drive a variety of water craft to support SEALs and other special operations forces during maritime missions, and conduct unconventional small boat operations such as coastal and river patrols.

Special Boat Teams (SBTs) are part of the US Navy’s Special Warfare Command and participated in Operation Iraqi Freedom. SBTs are composed of Special Warfare Combatant-craft Crewmen (SWCC), which are specially trained coxswains who employ, operate and maintain a variety of surface combatant craft to conduct and support special operations, including maritime interdiction missions, insertion and extraction of Navy SEALs and other US special operations units, direct action missions, and special reconnaissance. According to the Navy, Virginia-based Special Boat Team 20 assisted in the capture of the Iraqi port city of Umm Qasr and played a role in securing oil delivery stations along the Iraqi coast. SBT 20 detachments also conducted several leadership interdiction operations to prevent the escape of suspected Iraqi regime members.