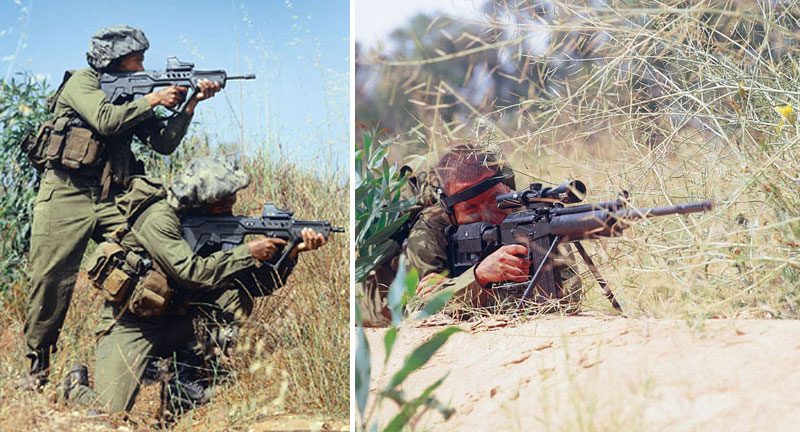 Even as the new equipment for the para SF is meant to replace the existing vintage lot the bulk of it is for operations in hostile territory. With this in mind, a para SF soldier will be provided with lighter and better bullet-proof jackets (“the ones made by the Defence Research and Development Organisation are heavy and open on the sides leaving the soldier vulnerable,” says Col. Shinde), better personal weapons, lighter para load and stateof- the-art equipment used by US Special Operations Forces.

All para SF soldiers will now carry the Israeli Tavor-21 assault rifle. Dubbed as the world’s lightest (3kg) and shortest assault rifle (overall length is 720mm), Tavor-21 can fire 750 to 900 rounds per minute, has an integral site with a laser pointer, can sustain day and night use with no zeroing, and is completely compatible with left-hand use. The assault rifle uses the ‘bullpup’ construction scheme which is in use with new generation weapons. This scheme has many advantages over traditional weapons. Firstly, it allows to lower weapons length which makes fire comfortable not only in the battlefield but in limited space areas as armoured personnel carriers. Secondly, gas recoil power pushes the weapon directly back which avoids barrels tossing up after each shot or series. This gives better accuracy to the weapon. Thirdly, the scheme allows to execute fire using only one hand.

The army has also procured a limited number of Israeli Military Industries (IMI) Galil sniper rifle. This is a semi-automatic rifle weighing 6kg and is ideal for quick second shot. The total delivery of Tavor-21 and the Galil sniper rifles has been completed, and these weapons are expected to reach the Special Forces Training School soon. Interestingly, the army has not accepted the Israeli Military Industries Negev Light Machine Gun. The Russian P.K. LMG has instead been preferred. However, according to a top IMI source, “The Negev LMG is much lighter and with a better rate of fire than the Russian LMG.” Meanwhile, the carbine for the para SF will come from the US. The DRDO has been unable to make 5.56mm carbine under the Indian Small Arms System (INSAS), and the present carbine with the army is in the process of being declared obsolete. The para SF has been looking for a light weight carbine, which should be equipped with laser dot sights, day and night sights and a silencer. The para SF will also get new General Purpose Machine Guns and 12 bore Pump Action Guns, the latter is being procured for the Infantry battalions as well.

The para SF, for the first time, will be equipped with Laser Target Designator (LTD). This is used to ‘designate’, or point the target, so that the laser beam from the designator gets reflected, is picked up by the laser detector on the warhead and the latter then hits the target. These are also fitted on the aircraft carrying out attacks with Laser Guided Bombs. However, the difficulty with this is that the aircraft has to keep flying pointing towards the target even after the bomb is released. The advantage of a ground based laser designator is that the aircraft can turn back as soon as the bomb is released and the bomb then rides the laser beam reflected by the former. The LTD, however, will require an extensive training and co-ordination with the air force.


The para SF will also get Combat Free Fall (CFF) parachute from the US. These are used for precision landing allowing a paratrooper to land within a few metres from the designated spot. This is extremely useful for paratroopers who have to mark the dropping zone or rendezvous with other personnel or equipment already dropped in enemy territory. Moreover, the present diving equipment with the para SF will be replaced by a Combat Underwater Diving Equipment (CUWD). This could be used in underwater reconnaissance in riverine terrain, underwater demolition of enemy bridges, clandestine crossing of wide water obstacles and sabotage activities. The para SF has also evinced interest in getting Light Strike Vehicles. To be in the range of a quarter ton to half ton, these vehicles must have all terrain capability and be helicopter mobile. The engines of the vehicle must be silent. At present, Jongas with their crew are air-landed. The Army Headquarters is in the process of finalising the General Staff Qualitative Requirement for the Light Strike Vehicles. Probably the most important procurement, a total of 26, will come from the US. These include Anti Tank Guided Missiles, under water rifles, kayaks for clandestine water borne operations behind enemy lines), under water cameras and video systems and Global Positioning Systems for land and under-water. An extremely useful equipment being sought is Radio Transponder Beacon and Guidance System. An SF soldier will have to physically deploy the beacon in the target area or the area of interest. The incoming friendly aircraft can then home on to the beacon and reach the precise desired spot. These beacons are active ones in that they don’t just show a beam for the aircraft but also guide them to the target area. Yet another equipment for the para SF will be 20mm canon. These will be mounted on vehicles for anti-personnel and anti-vehicle role especially for conducting raids in enemy area. With the above items expected to be with the para SF in 2004, the Special Forces would acquire a complete makeover in their roles an d missions.