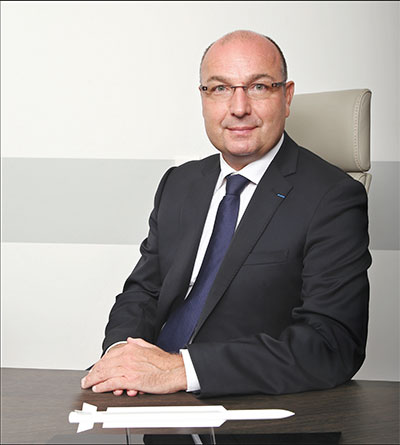 The coming of the Rafale fighter is the big news of the month. Can you share MBDA’s journey on this programme?

MBDA is the principle weapons provider for the Rafale aircraft, where our role is to provide the platform with game-changing combat performance. Exciting times are ahead as the highly-capable Rafale joins the IAF’s inventory, as these new aircraft come armed with a potent suite of weapons from MBDA.

Unquestionably the most famous is the Meteor, the ramjet powered and network-enabled beyond visual range air-to-air missile that is widely recognised as a game changer for air combat. Meteor’s throttleable ramjet engine provides sustained high-supersonic power, making it the only missile able to chase down manoeuvring enemies at even the longest of ranges.

No less game-changing for the Indian Air Force (IAF) is the SCALP stealthy air-launched cruise missile that also forms part of the Rafale weapons package. This potent weapon will give the IAF an unrivalled and flexible tool to conduct deep strike missions at long ranges against even the most protected of hostile targets. MICA provides both the Rafale and the newly upgraded IAF Mirage 2000 aircraft with a uniquely flexible approach to air combat. MICA is the only missile in the world featuring two interoperable seekers (active radar and imaging infrared), which makes MICA highly countermeasure resistant and, therefore, highly effective.

What are your other programmes with the IAF currently, both in the short-term and the medium-term?

Besides the successful delivery of the Rafale and upgraded Mirage 2000 weapons packages, as mentioned above, one of our main priorities for MBDA is the New Generation Close Combat Missile programme, where our ASRAAM missile was chosen by the IAF after a competitive evaluation. With its large rocket motor, and clean aerodynamic design, ASRAAM has unrivalled speed and resultant aerodynamic manoeuvrability and range.

Accordingly, ASRAAM delivers superior within visual range combat performance, providing a true first-shot, first-kill ability. The first IAF aircraft to receive ASRAAM will be Jaguar, but to fit it to other platforms such as Tejas – we are actively working with Hindustan Aeronautics Limited (HAL) and Aeronautical Development Agency (ADA) with respect to both Mk1A and MK1 – would be consistent with the IAF’s aspiration for ASRAAM to be its fleet-wide short-range air-to-air missile.


Another major programme for MBDA is the Mistral ATAM programme to equip the IAF’s helicopters with the world’s best helicopter-launched air-to-air weapon system. Working with HAL, integration of the Mistral ATAM system on the Dhruv helicopter and the Light Combat Helicopter (LCH) has been very successfully completed.

Key to many of MBDA’s offerings are their ability to be fitted to multiple platforms. By utilising the same weapon across different platforms, not only do extra aircraft benefit from these capabilities, but there are also major cost savings and operational benefits to be found in maintaining common equipment stockpiles, not to mention the training and logistics benefits. For example, utilisation of the Mistral missile on India’s helicopter platforms provides a bridge to their use in a ground based VSHORAD role, where the missile is fully compliant with India’s requirements and outperforms the capabilities of its rivals.

In the long term, what possibilities do you see in the IAF as well as the air domain of the Indian Navy?

Exocet MM40 Block 3 is the latest version of the famous Exocet missile family, and includes the replacement of the missile’s traditional rocket motor with a turbojet to extend the range of the system out to 200 km while the missile’s already excellent navigation system has seen further enhancements. As the Indian Navy already operates the SM 39, which is part of the Exocet family, it would be a logical step to also use Exocet in other operational areas. In doing so, it could provide significant operational, logistics and training advantages. We are working through our joint venture, L&T MBDA Missile Systems Ltd, to offer this for the Indian Navy’s MRAShM requirement.

HAL is interested in integrating the Advanced Short Range Air-to-Air Missile (ASRAAM) on the Hawk advanced jet trainer, the indigenous Tejas and the Su-30MKI, besides the Jaguar strike aircraft. Can you share more details on this?

What is the update on your collaboration with the Defence Research and Development Organisation (DRDO)? What technologies and systems would you like to explore with them?

We work closely with the DRDO and have worked on several proposals with them, in addition we are deepening our relationship with both public and private sector Indian defence entities, we have created a joint venture, L&T MBDA Missile Systems Ltd, with Larsen & Toubro; and this month we signed a new agreement with Bharat Dynamics Ltd for the assembly of Mistral and ASRAAM missiles in India. Through this multipronged approach we work do deliver a wide set of technologies to India, through whichever route the Indian government prefers.