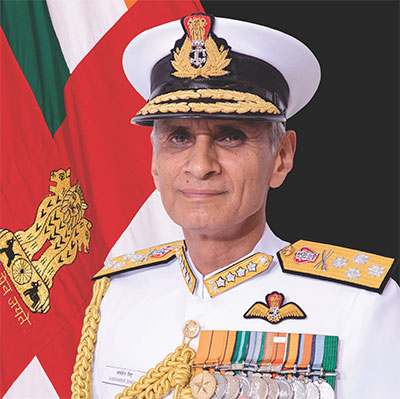 The Project-75I seems to be stuck. There are questions that eventually it may not even be executed through the Strategic Partnership model and the government may nominate a chosen DPSU shipyard. In any case, the second line of submarines will take over a decade before they are inducted into the navy. Is navy thinking of an interim plan to make up the numbers? Is it likely to place order for additional Scorpene submarines?

The policy on Strategic Partnership (SP) Model was promulgated by the government of India on 31 May 2017. Acceptance of Necessity (AoN) for the project was accorded on 31 January 2019. Thereafter, the Request for Expression of Interest for shortlisting of SPs and foreign OEMs was issued on 20 June and 2 July 2019 respectively. The responses from prospective SPs have been received on 11 September 2019. The responses of Foreign OEMs — M/s TKMS Germany, M/s Naval Group, France, M/s Rosoboronexport, Russia, M/s Navantia Spain and M/s DSME, South Korea — have been received.

Presently, the responses of both the SP’s and foreign OEM are being evaluated. While the procurement of new generation P-75(I) submarines is being progressed, the submarine force levels are being maintained through life extension of our legacy submarines. Presently, there is no plan to order additional Scorpene submarines or to nominate any DPSU shipyard for construction of submarines under Project 75(I).

As far as the overall submarine force levels are concerned, the required force levels of our submarine and strategy of their operation in the future have been enunciated in the overall force structure plans and are being developed to address the challenges in the underwater domain.

Indian Navy presently operates 15 conventional submarines (nine Sindhughosh class, four Shishumar Class and two Kalvari Class) and one SSN. With a mix of conventional and nuclear submarine, the Indian Navy’s submarine arm is capable of accomplishing a wide range of operational tasks. Most of our submarines have been modernised and upgraded in term of their weapons-sensors suite as well as their crew-support system. INS Kalvari and Khanderi, two Scorpene class submarines have been inducted into the Indian Navy. The balance four Scorpene submarines are at various stages of construction and trials at Mazagon Dock Shipbuilders Limited, Mumbai.


What is the status of other acquisition plans like the helicopters (NUH & NMRH), Mine-Sweepers, MRMR and IAC-2?

Acceptance of Necessity (AoN) for 24 Multi-role Helicopters (MRH) was accorded by DAC and Letter of Acceptance (LoA) is likely to be signed in the near future. In addition, Indian Navy also plans to procure Naval Utility Helicopters (NUH) through the Strategic Partnership Model to boost Make in India. NUH are likely to be inducted in a phased manner commencing 2025.

The NMRH features are likely to be similar to the MRH platform with the primary roles being ASW, ASuW and ELINT missions. Being a ‘Make in India’ Project, there is a larger scope for installation of indigenous sensors, equipment and weapons subject to clearing the User Evaluation Trials (UET). NMRH Project is at the pre-AoN stage. Based on the experience gained in the NUH project under SP Model, it is intended to go ahead with the NMRH Project under the SP Model. In the interim, the induction of additional 16 ALH and eight Chetak helicopters would alleviate the shortages in utility helicopters.

As regards minesweepers, Indian Navy envisages induction of 12 Mine Counter Measure Vessels. These ships will be capable of channel conditioning/ route survey/ sanitisation, local naval defence and search & rescue operations. The MCMVs are planned to have GRP hull due to superior response of GRP structures, as against steel, to underwater shock. Indian Navy intends to build these ships at an Indian shipyard, through transfer of technology from a foreign shipyard. Response to RFI issued in March 2019 has been received. The responses are being examined, based on which the RFP will be issued shortly.

With regard to IAC 2, Indian Navy envisages IAC-2 to be a, 65,000-tonne carrier with Integrated Full Electric Propulsion (IFEP) employing Catapult Assisted Take-off But Arrested Recovery (CATOBAR) concept of flying operations. At present, the case for IAC-2 is being deliberated at MoD.

The DRDO says that the design phase of Naval Mark II combat aircraft is complete and it will meet all the requirements of the Indian Navy. Does it mean that the navy is putting off the plan to procure carrier-based fighters through global tendering? Or will it have three lines of fighters — MiG-29K, Naval Mark II and the new fighter?

The LCA (N) Mk1 has been designated as a technology demonstrator as it cannot meet the navy’s operational requirements in its present form. However, during its developmental journey, it will achieve and prove niche technologies such as arrestor hook system, light-weight strengthened undercarriage and carrier compatibility testing. We are also currently working with DRDO towards development of twin engines deck-based fighters to meet our requirements.

To meet deck based fighter requirements, a RFI for MRCBF (Multi Role Carrier Borne Fighter) has been hosted on the ministry of defence (MoD) website.