Naval aviation should stay in tune with the future 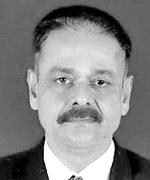 Whenever there is a debate on the future shape of air power for India, it is only natural that the conversation veers towards maritime air power, which is an important pillar of Indian Navy’s three-dimensional force, and country’s foreign policy outreach for strategic objectives.

For tomorrow’s threats, the armed forces prepare today. The adversary always springs a surprise. This is the history of warfare. We have become too familiar with the narrative of surprises from the neighbours across borders; therefore, it has become predictable to a large extent.

In today’s geopolitical scenario unpredictability lies over oceans where the technology has shrunk its vastness. An aircraft patrolling 3,000km away from its shores can continuously feed the Maritime Domain Awareness (MDA) data ashore which makes decision-making by the top leadership far easier. Distances have also shrunk because ships, submarines and aircraft venture far out from their shores now.

While it may have been possible for land resources to meet the developmental needs of a country in the past, it is not so anymore. China and India, world’s two most populous countries, know it well that to ensure food and energy securities of their people they will become more dependent on oceans, both for transportation of material and extracting resources. Invariably, this would lead to competition and contestation. Navies will become more relevant. One look at the warships off the Gulf of Aden, Straits of Malacca and Gulf of Oman etc would reveal that. China in its Military Strategy Paper of 2015 has enunciated that ‘the traditional thinking that land is all important needs to be abandoned. Oceans are most important for development and prosperity. PLAN will be modernised and made powerful to protect China’s interests in distant seas and abroad.’

Prime Minister Narendra Modi too has enunciated SAGAR (meaning Ocean), meaning Security and Growth for all in the region, as the key to economic growth and security of the country. He has gone beyond to include regional growth and security as a baseline for prosperity and development. Essentially, he has linked economic prosperity to security.


The Indian Navy, therefore, has enlarged its surveillance bubble right up to the extremities of the Indian Ocean. The navy works on the principle of spotting and identifying every vessel that sails through narrow straits into the Indian Ocean to determine friend or foe. Unless there is a robust surveillance and analysis mechanism, this objective cannot be achieved. Due to the vastness of the oceans, cooperation with neighbouring countries and sharing white shipping data has become a compulsive necessity for comprehensive surveillance. India’s foreign policy factors this reality. The initiative taken by the government to improve bilateral relations with neighbouring countries has been remarkable; in every joint statement, mention of maritime cooperation has been made. This forms the basis of justification of naval deployments to distant seas and ports.

The Indian Navy has taken to mission-based deployment at all chokepoints through which flows the trade to/and from the Indian Ocean and its littorals. Also, it helps build confidence with the littorals by way of their participation in any regional maritime security framework. What then will naval aviation be tasked with for which it should develop these capabilities? Also, given that the nature of warfare too has become different.

In peacetime, the tasks for the navy are broadly:

Here, the Indian Navy’s aviation has not been exploited fully due to limited airborne assets. While existing assets meet the immediate operational needs, the training and mutually beneficial aviation exchanges will have to wait till inductions in the pipeline materialise. The assets will also include strong cyber and space-based surveillance technologies.

Broadly, the navy would like to see force build up around quick information exchange infrastructure (satellite and terrestrial), aircraft with long legs for maritime surveillance (must cover our areas of interest, primarily IOR), airborne EW/ ESM suites in MPA and rotary wing aircraft, rotary wing for ASW and MARCOS induction, LR and MR Fixed-wing ASW aircraft (can be onboard MPA), rotary and fixed-wing drones with high resolution IR cameras and carrier-borne fighters (preferably common with IAF for ‘Make in India’ possibility).

The numbers are best worked out by officers who make an environmental assessment on a regular basis with the broad intention being not to match every capability of the adversary but to identify its vulnerabilities and create assets to cripple those vulnerable assets. In case the government is not averse to basing some of these assets in friendly countries in the IOR under the ambit of shared regional security, there can be a reduction in the number of assets to be added. Every ship needs to have an ASW helicopter as a weapon system and non-weapon ships and shore units need equipping with utility helicopters with limited shallow water ASW and reconnaissance devices. These may appear to be a big wish-list, but India’s conventional threats have increased over sea whereas internal security challenges have begun to emanate through sea routes, 26/11 being one example.

Our own sea lanes of communication (SLOC) protection and those of friendly countries would become a major task for the Indian Navy. If long range UAVs are employed, much of the MPA can be substituted. All these require large budget allocation and cannot be created in quick time. These need to span over a few years. Possibilities of indigenous manufacturing (commonalities with the IAF needs to be exploited fully) needs to be continuously evolved. The navy is working on the premise of one aircraft carrier for each seaboard with one under maintenance. There have always been discussions in favour or against aircraft carriers since decades, but fighters enabled maritime forces add value to deterrence.

(The writer is former Commander in Chief Western Naval Command)