F-21 was designed for unique Indian requirements. It looks a little bit like F-16 but there are some key differentiators based on the requirements of Indian Air Force 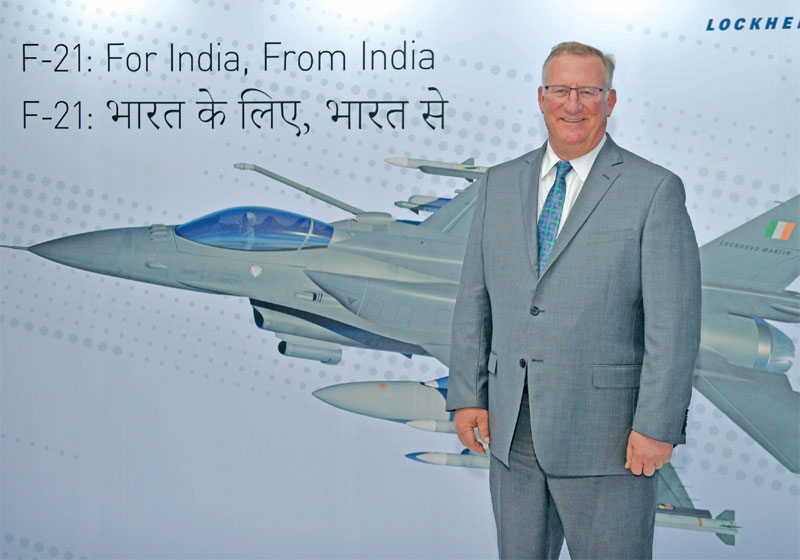 Lockheed Martin is offering F-21 to India. But in the US, there’s a different talk around this aircraft. Gen. James Holmes had said that F-21 should be converted to Unmanned Aircraft. So why should India buy this aircraft?

Certainly, you can make any airplane an unmanned platform but that doesn’t change what you are trying to do with F-21 in India. India is looking for an aircraft to increase its peace and security, the unmanned F-16 airplanes in the United States at this point are aerial targets. You can take an airplane that looks like F-21, and you can turn it into a target, but that’s not going to give you a combat capability that you are looking for and that’s not going to allow you to integrate with other platforms. It’s a different enterprise.

F-15 has also been offered to India. It has the more weapon-carrying capacity as compared to F-21. Why should India then invest in F-21?

We are looking to see what tactical airplane India is looking for to solve its multi-role fighter competition. You also have to consider you’re going to have these airplanes for a long time. The F-21 has a 12,000 hour airframe life. So, you can fly this airplane for 30-40 years. The weapon capability, strike capability and the air-to-air capability of these airplanes is very similar.

The big thing that distinguishes the F-21 is its ability to fly affordably for the Indian Air Force (IAF). The difference between a single-engine and twin-engine fighter across the board is that it is typically 20-30 per cent cheaper to fly a single-engine airplane than it is to fly a dual-engine airplane. The 12,000-hour life also extends the maintenance intervals and it just makes the F-21 a much more affordable airplane.

When you have 114 airplanes for the MRFA competition, think about all the fuel that you are going to use over the next 40 years to fly those airplanes, think about the sustainment cost. The F-21 comes out ahead every time. Even in the United States, the air force is focused on lowering the sustainment cost across the board. You have got the same capability, now you need to find whether its affordable for the next 40 years.

F-21 was designed for unique Indian requirements. It looks a little bit like F-16 but there are some key differentiators based on the requirements of the IAF. Start with the cockpit, it is an advanced cockpit, intended to have a larger display, much like the fifth-generation fighters like F-35 and F-22. A lot of what goes into F-21 is what we have learnt building the fifth-generation platforms. India also wanted the ability to do both, probe-and-drogue refuelling and boom refuelling. This is the only airplane in the world that has the ability to take gas from either a probe-and-drogue or a boomrefueller.

The other thing that’s very unique about F-21 is the central dorsal across the back of the airplane that has room for growth to increase the capability by integrating new avionics and technologies. In case of weapons load, the F-21 has the triple missile launcher adapters that allow you to carry 40 per cent more weapons. This airplane also includes technology such as Auto-GCAS, which is Automatic Ground Collision Avoidance System. If the pilot becomes incapacitated and the airplane starts to the ground, the airplane will fly itself away from the ground and save the pilot as well as the aircraft. In the US we have already saved 11 lives and 10 airplanes based on the Auto-GCAS system. It’s a very unique system.

Many believe that F-21 is F-16. While F-16 is a proven aircraft, Pakistan already uses these. So, there is some sort of reservation in India against F-21 even as Lockheed Martin has been persistent in offering it to India. How will F-21 win the battle of perception?

The F-21 on offer is designed very specifically for IAF requirements. It is a completely different airplane for the reasons I mentioned before. The capability matches/will exceed exactly what we believe they will ask when they release their proposal. The aircraft will be affordable for as long as India wants to use it and will be made in India for India. This would be an airplane with significant indigenous content from Indian factories. We already have significant teaming agreements, we have two joint ventures set up in India, we have more than 500 suppliers including 140 of MSMEs. We have had tremendous success working with the Indian industry, very high quality and the delivery is on time and at a good cost. This will be an indigenously produced Indian aircraft for India.