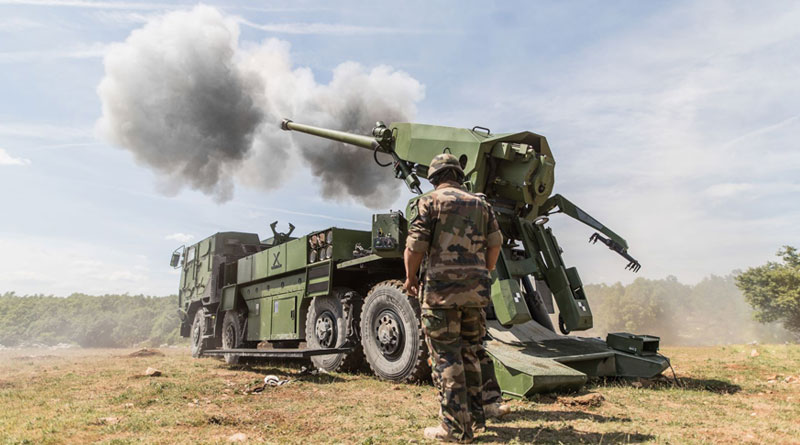 Nexter Group is presenting part of its product catalogue at the IDET exhibition in Brno, Czech Republic from 6 to 8 October 2021. A week after the Czech Ministry of Defence signed a contract for the purchase of 52 CAESAR 8×8 artillery guns, Nexter is exhibiting a sample of the CAESAR and an overview of its artillery ammunition range on its stand (P-076).

On 30 September 2021, Czech Defence Minister Lubomír Metnar signed a contract for the procurement of 52 CAESAR 8×8 guns, in the presence of French Minister of Defence Florence Parly and Nexter CEO Nicolas Chamussy. By placing this major order, the Czech Republic becomes the third European customer and the seventh user of the CAESAR in the world. With more than 350 units ordered in France and for export, the CAESAR has become the benchmark in the wheeled artillery systems market. The CAESAR 8×8 installed on the stand corresponds to the version already acquired by the Danish army. The configuration of the Czech version is still under discussion with the operational staff.

Alongside the CAESAR 8×8, Nexter’s ammunition unit offers a wide range of products with the highest levels of performance and reliability, covering 80 percent of the NATO ammunition range. The stand includes the range of conventional (shells, fuses, modular charges) and smart (BONUS, KATANA) 155mm ammunition, as well as protection solutions, in particular the reactive modules. In addition, Nexter will present its medium-calibre ammunition, from 20mm to 30mm, as well as the 40 CT range, echoing the presentation of the RapidFire in its land version.

In addition, demonstrations of the NERVA XX robot are organised on the stand. This multi-purpose micro robot, developed with ECA Group, is specialised in mine clearance, and has a large autonomy and a manipulator arm. It can also integrate the same loads as the NERVA LG thanks to adaptor shoes.

Finally, on the Czechoslovak Group (CSG) stand, Nexter is unveiling a new variant of the TITUS armoured vehicle dedicated to route clearing. Another version of TITUS – a mock-up installed on Nexter’s stand, is equipped with a 120mm mortar. By expanding TITUS catalogue, Nexter and CSG are combining their efforts to increase their chances of commercial success.