SeaGuardian is the maritime version of the MQ-9B SkyGuardian from General Atomics Aeronautical Systems, Inc. (GA-ASI). MQ-9B will become the world’s most advanced Robotic Process Automation (RPA) when the first variant is delivered to the UK Royal Air Force (RAF) as the PROTECTOR RG Mk1 in the early 2020s. 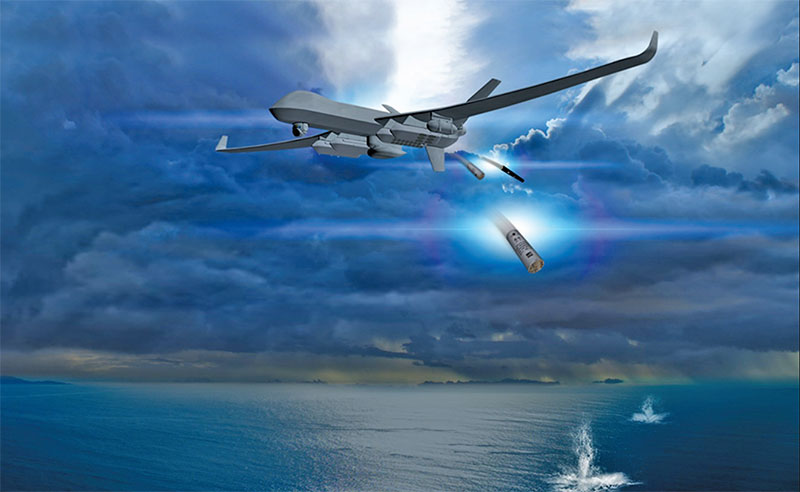 “PROTECTOR will be a step change for us in terms of capability,” said RAF Group Captain Lyndon Jones. “The new aircraft will offer greater range and endurance and will be certified to fly in the UK airspace.”

As the UK awaits its first delivery, demand from other parts of the world continues to build.

On 11 July 2018 MQ-9B became the first Medium-altitude, Long-endurance (MALE) RPA system to complete a trans-Atlantic flight when it landed at the RAF Fairford in Gloucestershire, UK. The flight originated from GA-ASI’s Flight Test and Training Center in Grand Forks, North Dakota, USA.

In addition to the UK and the US, countries such as Italy and France have GA-ASI MQ-9A systems in their inventory, and the United Arab Emirates operates the Predator RPA. Spain and the Netherlands have MQ-9 systems on order. Discussions are ongoing with several other countries.

The MQ-9B leverages the mature system architecture of the legacy MQ-9A and its more than two million flight hours, while incorporating enhancements that support mission capability, global industrial expertise, and its goal of achieving unfettered access to national and international airspace.

In contrast to MQ-9A, MQ-9B’s wings have been extended by four metres to a total length of 24m to accommodate additional fuel capacity, while also providing greater lift and endurance. The wing extension adds two hard-points for a total of nine that can accommodate a maximum external payload of 2,155 kilograms.


The SeaGuardian boasts a range of 6,000-plus nautical miles and an endurance of more than 40 hours. GA-ASI flew an MQ-9B for 48.2 hours on 2,721 kg of fuel in May 2017. “Providing greater endurance at lower operating cost, SeaGuardian is ideally suited to complement manned maritime patrol aircraft in performing wide area maritime surveillance.”

In addition to exceptional endurance, SeaGuardian can provide the MENA region with state-of-the-art sensors that offer unparalleled ISR capabilities for a wide range of operational and threat environments. Capable of operating at Beyond Line of Sight (BLOS) ranges at altitudes over 40,000 feet and in inclement weather conditions, the MQ-9B can also provide EO/IR Full Motion Video (FMV), Synthetic Aperture Radar (SAR) imagery, and Ground Moving Target Indicator (GMTI) data about potential threats to military commanders in real-time from stand-off ranges without harm to the aircrew.

The platform can also be equipped with a multi-mode maritime search radar, an Inverse Synthetic Aperture Radar (ISAR) capability, and an Automatic Identification System (AIS) detection capability that provides a true Maritime Wide Area Search (MWAS) and allows for the identification and interdiction of maritime targets.

These maritime capabilities, long in use by the US in the MENA region, are critical to confront the maritime threats, before they reach population centres.

SATCOM Auto Takeoff and Landing Capability (ATLC) is part of the SeaGuardian package, designed to help minimise the aircraft’s launch and recovery footprint, and reduce manning and equipment requirements at a Forward Operating Base (FOB). This capability allows aircrew on a Main Operating Base (MOB) to land, taxi and launch the aircraft from a separate FOB, requiring only a small team equipped with a ruggedised laptop at the FOB.

MQ-9B is a ground-up redesign of earlier variants. This was done in order to earn certification to fly in non-segregated airspace and integrate seamlessly with manned aircraft. GA-ASI expects MQ-9B to achieve certification in the early 2020s, when the aircraft initially will meet NATO STANAG-4671 airworthiness standards, and subsequently, commercial airworthiness certification standards in cooperation with the US Federal Aviation Administration (FAA).

The Detect and Avoid (DAA) system that GA-ASI has developed for the aircraft is made up of a radar, Traffic Collision Avoidance System [TCAS], Automatic Dependent Surveillance-Broadcast [ADS-B], and the ability to blend that surveillance onboard in support of alerting and manoeuvering guidance to the pilot in the Ground Control Station (GCS). It enables the RPA to detect other platforms and safely remain well clear in coordination with air traffic control.

Numerous technologies and design attributes have been incorporated into the production of MQ-9B to meet certification standards. To comply with STANAG airworthiness requirements for airframe fatigue and integrity, all MQ-9B aircraft are constructed with certified composite materials using riveting and bonding processes that yield a service life of 40,000 flight hours – double the service life of the MQ-9A aircraft.

For MQ-9B to be able to ‘file and fly’, it needs to be controlled by a GCS that’s also certified. That effort has brought with it a number of key features designed to enhance safety and situational awareness for the remote pilot, including the Launch and Recovery Element (LRE), Mission Control Element (MCE), dual control Pilot/Sensor Operator (PSO) stations, full automation or manual ‘pilot-in-the-loop’ operations, and design standards to meet the FAA’s DO-178/DO-254 airborne systems and equipment certification.

GA-ASI is also developing an Anti-submarine Warfare (ASW) capability. In October 2017, GA-ASI demonstrated remote detection and tracking of submerged contacts using an MQ-9A RPA. The MQ-9A used sonobuoys to gather acoustic data and track underwater targets. The data was transmitted to the MQ-9A, processed onboard, and then relayed to the aircraft’s GCS. The demonstration successfully paired sonobuoy receiver and data processing technology onboard the MQ-9A.

Future developments are planned that include SeaGuardian’s ability to carry and dispense sonobuoys and to transmit the acoustic data via BLOS SATCOM. This continuing development offers yet another cost-efficient capability to complement manned maritime patrol aircraft in the prosecution of submerged vessels.

GA-ASI has delivered over 850 aircraft, more than 300 GCS, and its aircraft operate worldwide. Every second of every day, close to 70 of GA-ASI RPA are airborne worldwide. To date, GA-ASI aircraft have accumulated over five million flight hours, with 90 per cent of these flight hours achieved during deployed operations.

Developed to fly in civil airspace, SeaGuardian provides persistent situational awareness across vast maritime domains. It does this without putting aircrew at risk and more cost effectively than manned aircraft alternatives. Interoperable with NATO, its multi-mission capability makes it a valued asset in a variety of scenarios – from environmental protection and maritime domain awareness to search and rescue and military surveillance.