Kanpur-based defence equipment manufacturer MKU Ltd, which is also a registered NATO supplier, has sprawling infrastructure in Malwa and Rooma. It also has one overseas facility in Sittensen, Germany. They have a 50-50 tie-up with Germany’s EIS Electronics GMBH to manufacture cable harness products. 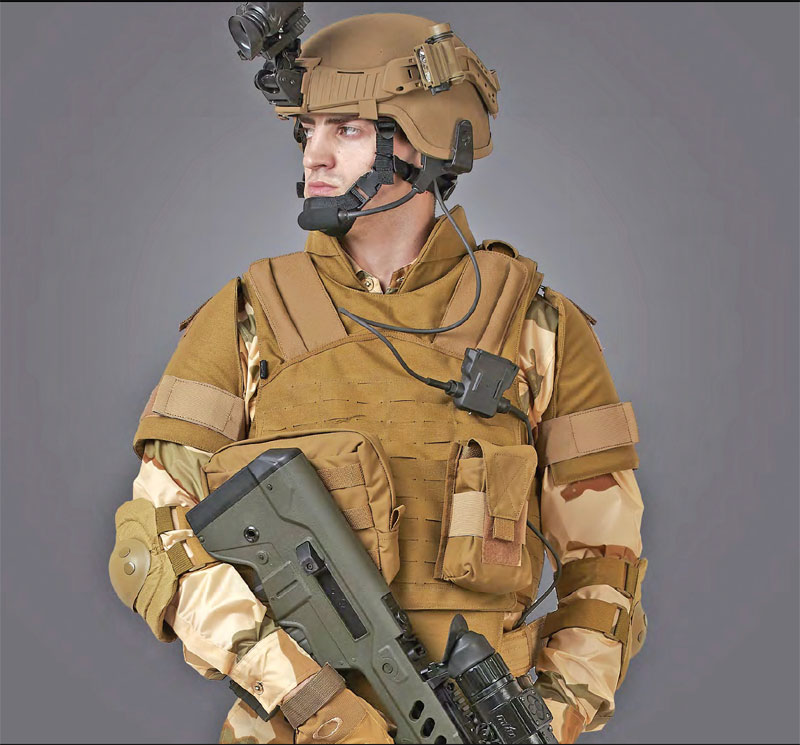 The company provides plethora of products and solutions in the domain of protection and surveillance space which can be broadly classified into personal protection, light-weight body armour and electro optics (night vision devices). Set up in 1985, MKU caters to the demands and needs of both Indian and international forces across 100 countries.

On arriving at their Gandhigram office, mediapersons were briefed and driven to the Malwa facility where they were acquainted with the manufacturing and production process of combat helmets. Right from the raw material (rabbit thread in this case, which cannot be broken) woven into long sheets and then stacking the sheets as per the specifications, getting them pressed and moulded to get the finished product was an awe-inspiring process. The threads made into sheets and further stacked together felt coarse when touched. Before the equipment are moulded, they are cut into desired shapes.

The media was also briefed on designing, prototyping, manufacturing and integration of equipments. An in-house lab checks physical and chemical parameters of raw materials. One of the major challenges faced by the Indian defence manufacturers is the non-availability of raw materials locally which have to be imported, said MKU’s Rajesh Gupta told FORCE.


Heavy duty moulding and expansive daylight presses allow the production of large-sized armour panels with ease. High precision water jet cutter further helps in cutting and profiling the same. On an average, a combat soldier carries 36-40 kg of weight on him which can be vaguely distributed as 20-25 kg of ammo, batteries, water and extras needed and about 17-20 kg of body armour, helmet and other wearables.

The heavy weight must not affect the combat-readiness and effectiveness of the soldier and bar him from carrying out his operations — ambush, reconnaissance, search, cordon, raid and movement to contact – successfully.

Thereby, the highlight is the sixth-generation armour technology which is lighter, thinner and more flexible. Company’s Instavest is a ‘quick release’ ballistic jacket which can be divested by the wearer in one single action in a fraction of a second and can be re-assembled again very quickly for wearing again. At less than five kgs, it is 40 per cent lighter, 30 per cent thinner and 50 per cent more flexible than most conventional vests. It has many variants – marine, female, covert, helipilot among others.

FORCE magazine was also given a demonstration on the usage of ballistic briefcases (fundamentally meant for VIPs). The ballistic briefcase uses both soft and hard armour. Every and each armour used has its significance in providing safety and protection against a specific threat. The company has supplied these ballistic missiles to the security apparatus within the country.

Night Vision Devices (NVDs), which work on the principles of refelectance of light, help troops effectively engage in combat at night or during periods of reduced visibility. Three kinds of NVDs exist in the market today — binoculars, monoculars and weapon sight.

The hygiene practiced at the NVD facility is worth mentioning. To ensure that clean steps were taken, shoe wrapping machine is used before you walk into the room where researchers work on electro-optics equipment. One is also expected to cover the head and wear a coat over their dress. The 5,000 square feet facility is equipped with state-of-the-art machinery and equipment for the various optics, electronics and mechanical processes. Their R&D centre, explained Gupta with a modest pride, is recognised by the government of India. The company is now also working on indigenous image intensifier tubes for manufacturing their NVD.

In April 2018, MKU and France’s Thales signed two MoUs for development and production of optronic devices and F90 close quarter battle (CQB) rifle. These products will be offered to the Indian Army and homeland security forces under the ‘Make in India’ initiative of the government.

MKU, which is scheduled to take part in DefExpo 2020 to be held in Lucknow from February 5 to 9, will be visited by a delegation from Dassault just prior to the beginning of the event.