CAS’ vision of the future war calls for a national effort 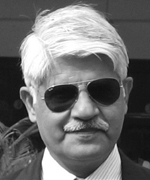 On April 12, as part of thes 7th National Leadership Conclave of All India Management Association (AIMA), New Delhi, the Chief of Air Staff, Air Chief Marshal VR Chaudhari spoke on the subject ‘The Future of Air Warfare Securing the Sky and Beyond’. Using a prepared text for his talk, he touched upon several issues germane to the Indian Air Force’s (IAF’s) application to air warfare and to its peacetime roles. He then fielded questions from a hybrid audience.

Referring to the outbreak of Covid-19 as a ‘black swan’ event, he spoke of its catastrophic effect all across the world and also made us dependent on internet and social media platforms. He said that the traditional image of a combatant is a soldier, airman or sailor but future wars would also be fought by student on his computer, a diplomat making foreign policy, a banker, or a politician. He called this comprehensive national power which is the sum total of diplomatic, information, military and economic power of a country and stressed that this comprehensive national power needs to be brought to bear on an adversarial country for victory.

He spoke of the four traditional physical domains of war i.e. land, sea, air and space having been supplemented by cyber and information domains over the past two decades, changing the conduct of war hybrid and multi-domain. This transformation has meant a reorientation of strategies and tactics and rebuilding of traditional war-fighting machineries in deference to this emerging paradigm.

He cautioned that, in the next war, the enemy may not be recognisable as a country or an organisation and we may not readily discover the perpetrators of distributed denial of services attacks which could be in the form of economic strangulation, diplomatic isolation, military stand-offs and information blackouts. Moreover, these attacks could precede any kinetic military action erupts. The hybrid nature of war would be spread across all domains and cover conventional and non-conventional, kinetic and no-kinetic and lethal and non-lethal operations—all under a nuclear overhang. The weapons used would vary from computer viruses to hypersonic missiles. Thus, we need to develop capabilities across the full spectrum of conflict for multi-time, multi-domain operations with our doctrines, equipment, training and tactics given the flexibility to adapt to these new challenges.

He highlighted the fact that IAF had its own challenges, having to cope with Covid-19 and the stand-off with China in Ladakh simultaneously. The IAF flew 2,900 sorties and 4,800 hours for distributing aid to 18 countries across the globe. Another 2,600 sorties were flown within India for transportation and positioning of Oxygen cylinders and medical supplies. All this flying effort was undertaken while maintaining operational readiness to cater for any eventuality on our northern borders. He mentioned that 240 hours had been flown under Operation Ganga to fly back Indian citizens from war torn region in Ukraine and around and alluded to the cable car rescue operation in Jharkhand by five IAF helicopters.

As far as IAF’s plans for future are concerned, he simply stated that it had to be ready to win tomorrow’s wars and said that air power was the pre-eminent instrument of choice for all operational contingencies as the advantage of high ground it offered was an essential criterion for victory. He added that space provided an extension of that high ground rationale and was the ultimate high ground from where enemy disposition and design could be comprehended for decision making, thus aiding the commander in Observe-Orient-Decide-Act (OODA) loop. The shorter the OODA loop, the more the chances of success for the commander and thus the aim ought to be to keep the enemy guessing and taking long on the Observe and Orient parts of the loop while keeping own OODA loop short. Secure and efficient networks would aid in this process as wars are network centric now; the sensors, the decision makers and the offensive weapons systems all have to be well connected for flexible and efficient operations.

He also dwelt upon the increasing importance of drones in air operations and alluded to their use in the Yemeni Saudi tussle, the Azerbaijan-Armenia conflict and the more recent Ukraine war. He explained that we were pursuing unmanned aerial combat systems and their teaming with manned aircraft. He also mentioned hypersonic weapons in the context of the Ukraine war.

He mentioned that we have a road map for adding new capabilities and technologies so as to ensure that our future operations are characterised by multi-role capabilities, rapid deployment, spectrum dominance, centricity of information, precise targeting and rapid innovation for creating asymmetry. He predicted that the unique combination of developing capabilities, operational concepts and technological opportunities would make air power play a crucial role in overcoming the rapid changes in the character and conduct of war.

He said we are aware that no nation can be truly sovereign without meeting its basic military needs indigenously and pointed out that the IAF had already started sourcing a large proportion of its equipment to national entities but said we need to focus more on research and development. He appreciated the government’s support in this direction and hoped that all the initiatives being taken would lead to India achieving its ambition of strategic autonomy.

He stressed on the importance of the man and woman behind the machine and reminded the audience that the IAF was a gender agnostic service with women serving in every one of its branches. He concluded by stating that India had the capability and the will to respond to any external threat as per its own escalation matrix and that the IAF remains a potent force.

In response to a question about IAF inventory, he lamented the fact that IAF had 39 types of aircraft from six different countries but that we had innovated to maximise their use and were now shifting focus towards software and Artificial Intelligence. The IAF’s acquisition plans needed constant changes in response to changing nature of conflict and emerging dimensions of warfare.

To another query he responded by explaining how the IAF had started engaging with industry directly to overcome the problems of a laborious acquisition process; he spoke of the Meher Baba Drone Competition organised by the IAF which had attracted 150 participants.

On a question about indigenous capabilities, he expressed the firm opinion that it was best to remain indigenous on aerospace related programmes even if it takes a longer time to get what we need.

The CAS did not mention at any time two concerns relevant to the subject (‘Securing the Sky and Beyond’) of his talk; the oft-repeated threat of a two-front war, and the shrinking squadron strength of the IAF. The aatmanirbhar slogan was brought up by him twice in consonance with the current stress by the government but he did not dwell upon how indigenous combat aircraft could be designed, developed and produced in time to fill the already gaping holes in the IAF’s combat squadron strength. The Tejas, the only indigenous aircraft currently produced in India, is still not fully operational even after more than four decades of development by the public sector Hindustan Aeronautics Limited (HAL).

In the meantime, the IAF’s combat aircraft squadron strength has dwindled to 31 (some sources state it as 30) against a sanctioned strength of 42; taking into account this deficit and the ongoing attrition/obsolescence, IAF will require about 420 combat aircraft over the next three decades. Currently, that projection includes 114 Multi Role Fighter Aircraft (MRFAs) for which the selection and procurement process is on, 100 Advanced Medium Combat Aircraft (AMCAs) from HAL, and 200 odd Tejas variants, the latter two from HAL. IAF has 40 Tejas on order and another contract for 83 was signed during the Aero India Show 2021; however, the Tejas is not yet operational while the AMCA is yet to fly (although the IAF has given a green signal to it, possibly under the aatmanirbhar pressure). These two are indigenous combat aircraft the IAF looks forward to although they cannot really be called indigenous as Gas Turbine Research Establishment (GTRE), a public sector enterprise in existence since 1959, has not been able to produce an engine for the Tejas so far. HAL is fraught with internal inefficiencies and not likely to improve its work culture in the near future to meet India’s indigenous fighter aircraft needs satisfactorily.

Recent news reports noisily proclaimed the first ‘Make in India’ Dornier Do-228 having flown by Air Alliance in the Northeast. It is not clear whether this was an intentional Make in India hype by HAL or a misperception of the media but HAL has been manufacturing Dornier Do-228 since 1983 under transfer of technology from Germany and has produced more than 150 military Do-228 aircraft in addition to the civil version currently in news. However, the Dornier Do-228 is not an indigenous design. The first indigenous transport aircraft SARAS, designed by NAL and planned to be produced by HAL, will have 14 seats; IAF has committed to procuring 15 (with an option for 45 more later on). As can be seen the ‘indigenous’ public sector capability in the transport space is limited to the 14-seater SARAS, yet to be operationalised.

Considerable amount of money and real estate has gone into the infrastructure already existing for aerospace in the public sector. HAL has 21 huge complexes strewn over Bangalore, Hyderabad, Nasik, Koraput, Kanpur, Lucknow, Korwa, Barrackpore and Tumkur (for the Ka-226T project, now under a shadow). Regrettably, the productivity of HAL as a whole is mediocre, as is the case with all our public sector undertakings, as brought out regularly by Comptroller and Auditor General (CAG) audit reports.

As the main customer of HAL, the IAF has never experienced the satisfaction that Boeing or Lockheed Martin afford to the US military. There is very little possibility of the work culture of HAL changing to the desired efficiency levels; its privatisation could be one solution but it is unlikely that the strong lobby of HAL will permit that to happen easily. Government patronage has meant that the inefficient public sector has dominated aerospace while the much more productive private sector was largely kept out of that field. However, in recent years, with changes in some policies, that is changing.

Private entities have achieved remarkable technology levels despite inadequate government support; however, they lack the scale that public sector has. In recent years, they have produced important components and sub-components for aerospace – not so much for Indian use as for foreign OEMs.

The first whole military aircraft project in India in the private space is the replacement for IAF’s HS-748 Avro – the C-295, to be produced jointly by Airbus and Tata; a total of 56 are planned. This would be the first tangible Make in India program in aerospace manufacturing by a private player with Airbus installing manufacturing capabilities, the final assembly line and testing capabilities in India. Also of interest is the report that Tata may manufacture the Grob G180 SPn business jet in India for military applications like border surveillance and intelligence. However, a leading-edge combat aircraft remains far beyond the reach of private sector although Tata Advanced Systems, Adani Defence, Reliance Defence, Mahindra Defence and Bharat Forge Limited et al have expressed interest in doing so. Whether indigenous aerospace industry gets going in the near future is an area of uncertainty.

Meanwhile, governments’ constant refrain of aatmanirbhar carries the dangerous potential of insistence on indigenous aircraft even if their performance lags behind the leading edge of technology considerably, thus dooming the IAF to mediocrity and leaving it unprepared for future wars, all the other threads of optimism expressed by the CAS notwithstanding.