Past few years have seen the PLARF expand its capabilities

The People’s Liberation Army Rocket Forces’ (PLARF) predecessor, the Second Artillery Corps (SAC), was officially formed in 1966, and by the end of the decade, it fielded roughly eight strategic missile Regiments, which were later upgraded to Brigades. Three more were added in the Seventies. 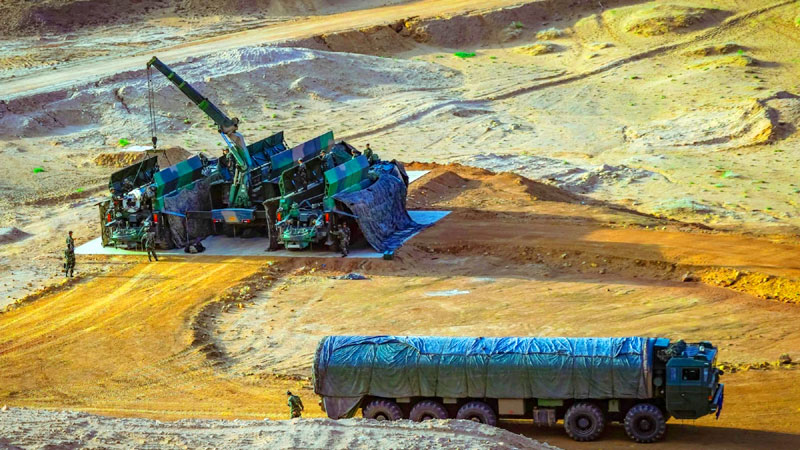 The question arises, why build so quickly in recent years? A review of available information on China-origin news about the 11 new Brigades offers some hints as to the direction and reasons behind this expansion.

In 2015 the SAC was re-organised into the PLARF and it also became a full branch of China’s armed forces. This was immediately followed by a 30 per cent increase in the number of deployed Brigades, and it now comprises seven bases. Previously, these bases were numbered 51 through to 56, with Base 22 being the warhead storage and handling base. Brigades were numbered in the 800s. After 2015, the bases were re-numbered from 61 through to 67, with Base 67 being the new designation of Base 22. Brigades were also re-numbered to match their respective bases.

PLARF Brigade garrisons are large, square facilities with a clear security perimeter. An administration building, or multiple administration buildings, are at the centre, most of the time facing the main gate. On either side of the administration area are rows of residential housing quarters for the Brigade. This layout is shared with most other PLA garrisons. The real signature of a missile base is the high-bay garage and TEL garages, usually near the rear of the base. The high-bay garage is usually a 30 feet-tall structure used to erect missiles indoors and out of sight of overhead recce satellites. Located nearby are garages for the TELs and support vehicles. Sometimes these garages are aligned in rows, and sometimes in a doughnut pattern, like the ones in Yuxi (622 Brigade). In some cases, the garages are attached to the high-bay, like the ones at Jianshui (625 Brigade) or Laiwu (653 Brigade). The Xinyang-based 666 Brigade is a fairly typical example of a PLARF Brigade-level facility. A single main gate faces an administrative building flanked by barracks buildings. Support vehicle garages, military communications, and a weather telemetry station are also present. The high-bay is an example of one with attached TEL garages. Presently, the PLARF comprises 40 Brigades. Some Bases have certain roles that match the missiles they are equipped with. For example, Base 61, directly opposite Taiwan, is equipped almost entirely with TBMs, while others, like 62 and 63 Bases, have much more diverse missile inventories.


Each PLARF Brigade’s command-and-control hierarchy comprises the Brigade Commander, Political Commissar, Brigade Chief of Staff, Commander of the Nuclear Warhead Storage Regiment, and the Senior Engineer. The Brigade oversees six Launch Battalions, a Communications Battalion (tasked with ensuring that the Brigade Commander and Political Commissar maintain constant communications links internally within the Brigade and externally with upper echelons of command), a Site Management Battalion, Equipment Inspection Regiment, Technical Battalion (which assembles missile sections and mates them with warheads in underground facilities maintained by the Site Management Battalion), and a Technical Support Battalion with responsibility for transporting warheads and missile sections from depot storage facilities. Nuclear warheads that the unit would employ are maintained in a specialised storage facility. Each Brigade is equipped with 12 TELs (six Launch Battalions, two subordinate Companies each, and with each Company assigned one TEL).

The PLARF designates its missiles in numbered classes that are somewhat indicative of their engagement envelopes. Missiles in the single digits are the older Seventies/Eighties era ballistic missiles. The DF-4 IRBM is still in service at Sundian (662 Brigade) or Tongdao (634 Brigade), while the DF-5 ICBM is most definitely still in service, with some of them being upgraded to the DF-5C variant. The DF-1X class constitutes TBMs and ground-launched cruise missiles (GLCM), with ranges below 1,000km for ballistic missiles, and around 2,000km for cruise missiles. The DF-2X class encompasses both the DF-21 family of MRBMs and the DF-26 IRBM. The DF-3X and DF-4X ICBM families each only have one missile system, the DF-31 and DF-41, respectively. The DF-31 is a road-mobile ICBM that originally had a range of only 7,200km before being upgraded to the DF-31A, which has a range of 11,200km. It has since been upgraded with an improved TEL design, the DF-31AG (equipping the 664 Brigade). The DF-41 is the PLARF’s newest road-mobile ICBM, which could have a range of up to 15,000km. Basing arrangements for the DF-41 are currently unknown, but Hanzhong (644 Brigade) has been noted as an obvious candidate.