Arunachal Pradesh : A new kind of war history is being written in Arunachal Pradesh. And fittingly new monuments are being erected to represent it. The changing landscape of India’s frontier state is now dotted with memorials raised in honour of those whose personal courage rose in sharp contrast to the sinking moral fortitude of the highest military leaders to stem the relentless waves of Chinese soldiers in the autumn of 1962. These new temples of valour — mostly a decade old — are recording history not through the monochromatic lenses of victory and defeat, but something much more poignant, deeper, and hence that much more important. 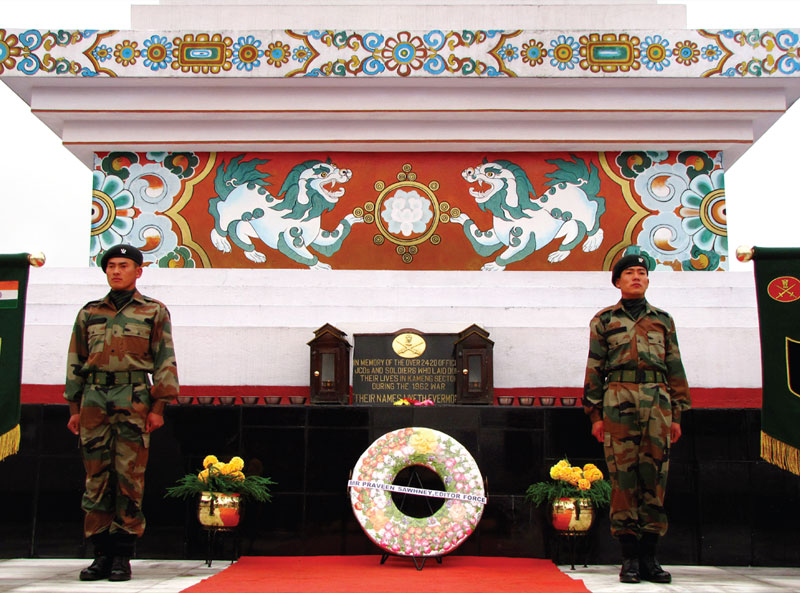 The 1962 war with China played out as much on the extreme high altitude slopes of the lower Himalayas, as it did on the psyche of Indian politico-military leadership. Defeat debilitates. Physically and psychologically. Recovery happens, but often the road to recovery, especially psychological recovery, is long and riddled with self-doubts. Which is why, travelling through Arunachal Pradesh in August 2010 is an uplifting experience because the new historical monuments show that the long road has finally been traversed, so what if it took nearly four decades. The blistering wounds have turned into flowers of self-assurance, self-belief and self-confidence. The ghost of 1962 has not been laid to rest; instead, it has been resurrected at all sites of the battles, big and small, lest we forget what had happened, so that itdoes not happen again.

Throughout the state, starting the late 1990s, Indian Army started building a series of memorials, some dedicated to a particular battle, for instance, Assam Fort at Bum la where a platoon of 5 Assam Rifles bore the first brunt of the Chinese assault at altitude of 15,300ft above the sea level and some for individual soldiers like Subedar Joginder Singh who was awarded the Paramvir Chakra or Rifleman Jaswant Singh, the recipient of Mahavir Chakra. It is as if, even when the Indian government is reluctant to come out with an official history of the war, the Indian Army finally wants the acknowledgement that, while the nation may have lost in ’62, the Indian soldiers did not. They rose above highest political-military fault-lines, mostly without any direction or motivation from the top, to wage the bloodiest battles of their lives. They may not have lived to tell their stories, but there is now a new generation of officers and men who are making sure that these stories are not lost again.

As happens with most oral histories, retelling often leads to several narratives, so is the case here as well in some instances. So even if there are discrepancies in sequences, the basic fact of death-defying courage in each story shines through. Perhaps, it is for this reason that each memorial tries to record what happened at the place of its erection. And perhaps this is the reason that at each place of contact with the Chinese there is a memorial whether it is Bomdila, Rupa, Phudong, Nyukmadong, Lumpo or Lagyala Gompa. At least, in this way there would be some record of what happened in those two months.

Unlike most memorials which invoke a sense of solemnity, the Arunachal memorials inspire gut-wrenching awe. They prompt the visitor to not just lay a wreath or raise his or her hand in a salute but to hear the deafening silence which permeates the air, to close the eyes and visualise the fatally desperate combat, the last moments when the body simply could not keep pace with the soaring spirit; when the war-cry and anguished screams became one.

The nucleus of these monuments is the Tawang War Memorial built in 1999, where everything else converges. The 40ft high structure is built like a stupa or a Chorten, the Buddhist monument venerating the dead. The idea was not just to record the names of those who died, but to honour them in a manner befitting the place they died defending. Hence, once the memorial was conceived, the army invited monks from the Tawang monastery as well as civil population of the town to consecrate the Chorten around which the rest of the memorial came about. Rendering a deep touch of sacredness, buried inside the Chorten are scriptures, idols and other valuables which the people of Tawang gave to the memorial. Further sanctifying the building of the memorial, the Dalai Lama sent his blessings in the form of scriptures and idols of Arya Avolokthesware and Lord Buddha which now reside inside the Chorten. Flanking the Chorten on either side are two memorial halls, one to commemorate Subedar Joginder Singh and the other preserving a few weapons and personal equipments of the martyrs. All along the outer periphery of the memorial are 32 granite plaques with the names of 2,420 martyrs who died in this sector of Arunachal Pradesh engraved in gold.


Just behind the memorial is a small amphitheatre where a giant screen has been erected. After sunset, a documentary with some light and sound effect encapsulating the heritage, landscape, culture and habitat of Tawang is played for the visitors. Interspersing the history of Tawang are the glimpses of the 1962 war, with some footage of the still photographs which still exist: Men climbing the high altitude mountains slopes in canvas shoes and summer lothing, some pushing artillery guns, others surviving on some dry rations complete the picture of callousness of those who were entrusted with the defence of the country.

The Tawang Memorial is on the itinerary of most young cadets, soldiers, civil service probationers and students from several government institutes, apart from tourists and pilgrims who visit the town. This is the reason the army is keen to recount this bit of history for posterity with honour, dignity and candour. That it is succeeding in doing this can be gauged by the visitor’s book which has been recording all visits and sentiments. There is hardly a message which is not redolent with pride.

While the Tawang Memorial may be the centrepiece, the others are no less. The moment one leaves the plains of Assam for the mountains of Arunachal, signs of ’62 dot the landscape. Through arched gateways, roadside memorials, deities and towns made famous by those who died there. A few minutes after crossing Se la and over two hours short of Tawang is Jaswantgarh, named after Rifleman Jaswant Singh, who was martyred at this spot. While the christening of the place happened sometime after the war, the memorial is about a decade old. Today, it has been accorded the status of a temple and Rifleman Jaswant Singh is now venerated as a ‘baba’. Apparently, a soldier dreamt of him and since then those who are entrusted the job of looking after the memorial make daily offerings to the ‘baba’ before doing anything else in the morning. A subedar who is currently in charge of the ‘temple’ says, “If I don’t offer tea to baba first thing in the morning, nothing goes right that day. And when a soldier dozes of on duty, baba slaps him awake.”

Along with Lance Naik Trilok Singh Negi and Gopal Singh Gusain, Rifleman Jaswant Singh helped stall four consecutive attacks of the Chinese to enable his compatriots to reinforce their defences at Se la. Despite mounting five  attacks, Chinese had to eventually withdraw from this area. While both Jaswant Singh and Trilok Singh were martyred here, Gopal Singh was badly wounded. On the Chinese side, the casualties were nearly 300, all of whom lie buried adjacent to Jaswant Singh’s memorial.

Beyond Tawang, enroute Bum la on a ridge near Tongpen la is the memorial for Subedar Joginder Singh who commanded a platoon here. Despite being completely overwhelmed by the Chinese forces, he rallied his handful of soldiers to put up a fight to finish. Even when he was badly injured in his thigh, he refused to give up. When ammunition ran out, his soldiers charged at the Chinese with their bayonets till the last man. He was finally taken prisoner of war but refused medical treatment at the Chinese hands.

Eventually gangrene set in and he succumbed to his injuries. The government honoured him with PVC posthumously and finally the Chinese returned his ashes. His memorial is also a place of veneration and visitors are asked to make an offering here, following which they are given a piece of the offering in the form of ‘prasad’.

However, it is not just the memorials which suggest the gradual change that is coming about. It is evident in the way soldiers and officers talk informally about those dark months. There is pride in the history as well as rage for the failures of those who let others down. There is also determination that left to the military, history will not be repeated. Brave words, indeed; but perhaps, change is blowing in the frosty Himalayan winds. It is a heady feeling. And altitude has  nothing to do with it.