The IAF continues to be an important responder for HADR operations

The Indian Air Force (IAF) has always been at the forefront of Humanitarian Assistance and Disaster Relief (HADR) operations in the country. Since Independence, India has experienced a number of natural and man-made disasters. The IAF has not only carried out relief and rescue operations in the country but also extended its help to other nations, especially to neighbouring countries where it has emerged as the lead force in HADR operations. 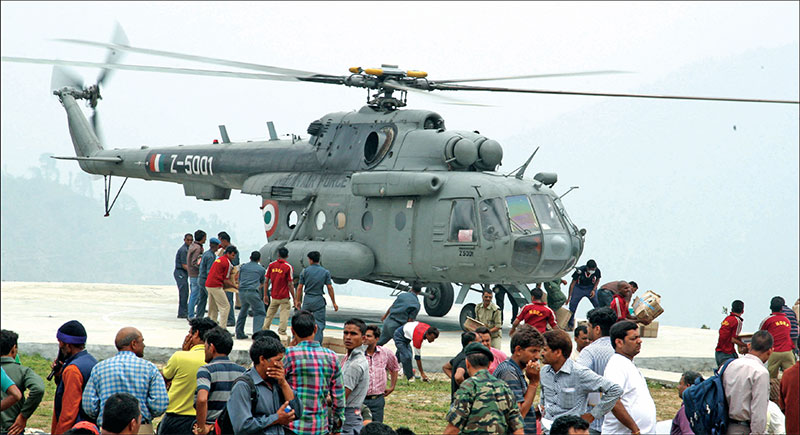 The IAF also boasts of an exceptional airlift capability, with the fixed-wing and rotary-wing transport assets being in adequate numbers today. While the transport fleet’s traditional role has been ‘Air Maintenance’ of Indian troops in the western borders and maintaining troops and civilian population in the eastern borders, it has always been deployed for HADR missions successfully. The fixed wing and rotary-wing transport fleets of the IAF are always the first pick when it comes to HADR operations. The IAF has its own emergency response teams co-located with major transport bases at Hindon, Palam, Bengaluru, Guwahati and Chandigarh. It also has Rapid Aero Medical Teams (RAMT) positioned at important locations.


The IAF got a significant boost this year with the induction of the first four CH-47F (I) Chinook heavy-lift helicopters. The Chinooks will give the IAF a quantum leap to transport cargo to precarious high-altitude locations. According to the IAF, the Chinooks, which have the ability to lift 9.6 tonnes of cargo, have been procured with India-specific enhancements to improve their flexibility for heli-lift operations like search, rescue operations and air ambulance. Since the helicopter is highly manoeuvrable and has the ability to get in and out of tight valleys, it will be a potent force in areas like Uttarakhand which has difficult terrains and are frequently affected by flash floods.

In the wake of Cyclone Fani, in May 2019, the IAF dispatched three C-130Js Super Hercules aircraft to Bhubaneswar, to join the relief and rescue efforts in the state. The aircraft carried around 45 tonnes of relief material, including medicines for the cyclone hit locations. The aircraft lifted off from Hindon air force base. One Mi-17 helicopter was also deployed for HADR operations. The IAF also set up a contingency response group at Bhubaneswar for controlling ground operations.