For all its hype, the office of the CDS approved by the government is not what it was meant to be

For all the anticipatory hype around the elevation of General Bipin Rawat as India’s first Chief of Defence Staff (CDS), the bitter truth is, it will not help in war preparedness. The CDS is likely to prepare the military to fight the wrong enemy, the wrong war with wrong procurements, training and mindset. While it might help the Modi government politically, it would make India weak militarily.

By making a four-star and not a five-star CDS (as was recommended by the 2002 Group of Ministers report headed by deputy Prime Minister L.K. Advani), the Modi government has (a) ensured civilian control of defence ministry (b) obviated (unfounded) fear of military coup by a powerful CDS (c) fulfilled long-standing demand of CDS and (d) retained Gen. Rawat, a politically useful general who values perception management over actual capabilities.

The twin-hatter CDS — as head of the Integrated Defence Headquarters (IDHQs) and permanent Chairman of the Chiefs Of Staff Committee (COSC) —, Gen Rawat will have four jobs. One, he will be answerable to the defence minister, like other secretaries in the MoD, along with the defence secretary. Two, on the military side, as head of the COSC, he would be first amongst equals whose advise would be binding on the Services’ chiefs. Three, he would do all that IDHQs had been doing – raised in September 2001, the IDHQs had come a long way doing a range of tasks including procurements — better with his raised status and authority.

Gen. Rawat’s fourth and most important task would be ‘facilitation of reconstructing of military (or integrated theatre) commands’ in three years. This is a problem area with deep implications. Given the uninspiring indigenous defence industrial base, frugal defence allocations, heavy dependence on imports and two military lines to protect, tying down of limited military assets (especially belonging to air force) in integrated theatre commands without proper assessment that it meets real threats and future warfare needs would be disastrous.

Focussed on Pakistan, Gen. Rawat believes Indian military should prepare for hybrid warfare comprising entire spectrum of war from sub-conventional (counter terror) to conventional to nuclear level, to cyber war to law war to psychological war to information (perception management) war and so on. He also believes that even though room for conventional war is shrinking, the army should be lead in war. Speaking at ‘Army Technology Seminar’ on December 23, he said: “While non-contact war will help give advantage, the man on the ground (soldier) will remain relevant”. He added, ‘Quantum, space, cyber and Artificial Intelligence (AI) need to be leveraged in defence ecosystem.” He is certainty not talking about the war that PLA — our main adversary — is furtively preparing itself for and giving sleepless nights to the powerful US military.


The PLA is preparing for conventional war which is transforming from real battlefields to virtual battlespace. There would be AI-backed intelligent computers (capable of learning, reacting and problem solving in fog of war better than humans) embedded in unmanned systems on land, air and sea. These intelligent and autonomous systems will communicate with one other in real time by networks which will be hugely vulnerable to cyber and electronic warfare. Given this, small networks supported by cloud architecture (having advanced computing powers) and data would be preferred to large networks in theatre commands. Joint-ness will give way to diverse small unmanned missions.

PLA’s 2015 created Strategic Support Force (SSF) comprising cyber, electronic warfare, space and psychological warfare will have capability to end war before it starts. The SSF will destroy and disable network nodes making communication on battlefields — which will include land, sea, air, space, deep sea and electromagnetic spectrum — unsustainable. PLA’s humongous cyber-attack capabilities could start war instantly, without warning, involving whole-of-nation by shutting down all computer and telecommunications connected commercial enterprises in the country creating havoc. So, cyber and space are not force multipliers, as Gen. Rawat believes, but potent force in new warfare.

There will be fewer humans and more machines fighting war. The intelligent cruise, ballistic and hypersonic missiles will be capable of reasoning on its own such that it would be able to change its mission mid-course to hit a more dangerous target. I recently participated in a high-profile panel discussion on ‘AI in Future Warfare’ at the 9th Xiangshan Forum in Beijing where the consensus was that the character of warfare would alter dramatically. In next decade or so, by the time India’s integrated theatre (military) commands fructify and all Integrated Battle Groups (brainchild of Gen. Rawat) become operational, the war would have changed: From Information to Intelligent warfare. It would be both non-contact and software driven invisible war, with few or no soldiers, all by 2035. 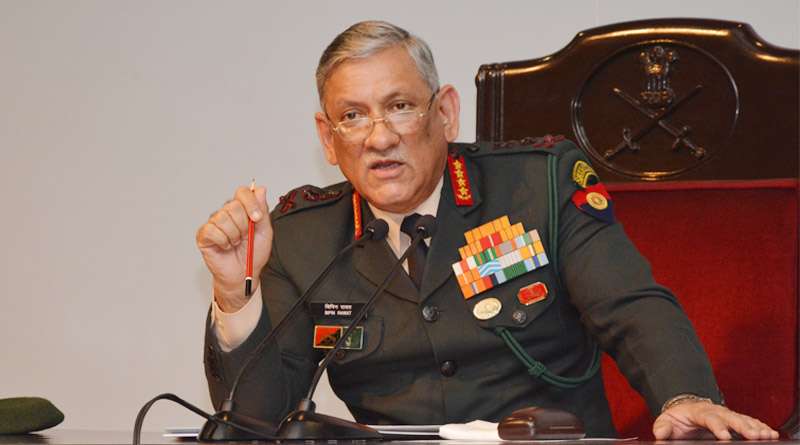 The word ‘quantum’ that Gen. Rawat used casually at Army Technology Seminar is a different ballgame. It would propel warfare to the next level — from Intelligent to Quantum warfare where China has invested more finances and effort in quantum sciences (including computers) than the US. In quantum warfare, things will be superimposed — one thing will exist at two places at the same time. Sounds unbelievable, that is what it would be by 2040.

Indian military is oblivious to all this because it has been fighting terrorism since 1990, a war it cannot win. It is not realised that given the border dispute with China and President Xi Jinping’s declaration that not an inch of Chinese territory given by its ancestors would be forsaken, India has major problem at hand. To be sure, India’s major threat is not terrorism or Pakistan. It is the PLA — whose capabilities are not adequately understood — and interoperability (ability to fight together against common enemy) between PLA and Pakistan military.

The PLA — focussed on the US military — started conceptualising its military reforms from 2010, and finally announced them in 2015. In India, it has been putting the horse before the cart. Without clear understanding of threats and future warfare, work to raise integrated theatre commands has begun with Gen. Rawat as the CDS. Everything else, from joint procurements, training, logistics and operations will not amount to future war preparedness, which is what the CDS is meant to deliver. In any case, Gen. Rawat’s focus — since he is counter terror expert — will be on sub-conventional war. This will help the government which has declared terrorism as the threat to India. But it will not make Indian militarily strong.