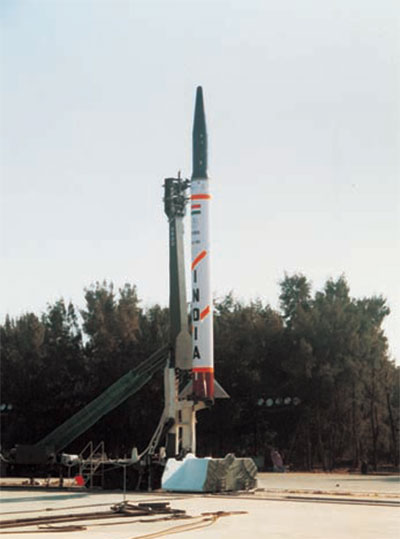 There are two types of surface-to-surface missiles: ballistic and cruise. A ballistic missile is an unmanned, rocket powered weapon. It is powered briefly during the initial launch stage, but not during descent. As a result, it follows a curved, or ballistic, trajectory once gravity takes over. Long range ballistic missiles fly outside the atmosphere in vacuum. In contrast, cruise missile is an unmanned aircraft. It uses a booster rocket during launch, and requires an air-breathing engine similar to aircraft during the entire flight. For example, a ballistic missile is guided for the first five of the 20 minutes it takes to travel 5,000km; a cruise missile, would require close to six hours of continuously guided flight to cover the same distance.

Ballistic missiles have a good military value. They travel at high speeds, and are valuable in launching surprise attacks in depth; they are virtually unstoppable and are certain to enter hostile territory. In comparison, aircraft require a considerable longer period of time, and are vulnerable to enemy fire. In addition, ballistic missiles can be fired at night, when aircraft may be unable to operate effectively. Moreover, new types of missiles like the US Army Tactical Missile System (ATACMS), the Russian TOCHKAS, India’s Prithvi, and China and Pakistan’s comparable battlefield ballistic missiles may be just as cost-effective as manned aircraft, suggesting that ballistic missiles could assume certain roles near the battlefield previously assigned to air forces.

A ballistic missile consists basically of two parts: a booster rocket that may have two or more stages, and a structure on top of the booster rocket that contains the payload. The payload could have one or more re-entry vehicles which are designed to re-enter the atmosphere from outer space (in case of IRBMs and ICBMs), or to re-enter the denser part of atmosphere (in case of BSBM and SRBM), at very high speed without damaging the weapon inside. The re-entry vehicle consists of the warhead, an inertial navigation system, a digital autopilot, and an arming and fusing systems. It is evident that a large portion of a payload is taken up by the paraphernalia which accompanies the warhead. It is, therefore, essential that a warhead be light, compact, but, provides a big bang. And, hence the importance of warhead testings, especially in the case of nuclear warheads.


The booster rocket which does the propulsion can be a single or a multi-stage one. Each stage of the booster rocket consists of a fuel supply and a thruster engine which burns the fuel. The lowest stage ignites first, pushing the entire missile upwards. When the fuel of that stage is exhausted, the stage drops off — there is no need to carry useless weight along — and the second stages ignites, providing propulsion to the remaining part of the missile. When no more propulsion is needed, the payload is separated from the last stage and starts coasting in space in the case of IRBMs and ICBMs, or starts its descent into denser atmosphere. Stage separation is a complex technology which gets difficult when more stages are added in a booster rocket. Unfortunately, a single stage rocket cannot have a strategic reach.

This limited enhancement in range is accomplished by the type of fuel used. Liquid fuels have large specific impluses and can deliver greater payloads to longer distances. Moreover, liquid-fuel rockets allow control over both the speed of the missile and its direction. But, liquid propellants are difficult to handle in the field and during tactical movements. Moreover, they have a long logistics train which can be easily spotted. Solid propellants, on the other hand, are simple to handle, but allow control only over the direction of the rocket thrust. On balance, the trade-off is a solid fuel’s operational simplicity for the liquid-fuel system’s superior performance. All developed countries including the US, Russia and China have opted for ballistic missiles with solid fuel with multi-stage booster rockets.

A re-entry vehicle is shaped like a slim aerodynamic cone in order to pass quickly and smoothly through the atmosphere. Such a vehicle gets red-hot as it collides with air molecules on its way to the target. So it must either be given a blunt shape to move slowly through the atmosphere, creating a bow wave that protects the rest of the vehicle from overheating, or it must be covered with a material that gradually peels and burns off, carrying away excess heat. The first technique called Heat-Sink is easier to master, but it exposes the re-entry vehicle to considerable drag, thereby reducing accuracy. The second called abalation or peeling off is difficult to develop. For example, in the case of ICBMs, the rocket nose cone enters the Earth’s atmosphere at the speed of 15,000 to 18,000kmph. In the case of India’s Agni II with a range of 2,000km, the outer surface of the re-entry vehicle heats up to 3,000 degree centigrades. The composite (carbon-carbon) bonded material on the nose cone of Agni’s re-entry vehicle has been successfully designed to abalate and ensure that the inner temperature of the payload does not exceed 40 degree centigrade. Even as India has mastered the making of Agni re-entry vehicles, developing re-entry vehicles for a prospective ICBM would be an entirely different ballgame.

The precise navigation of a ballistic missile is achieved by a method called inertial guidance. It utilises a totally self-contained system of instruments called on board the missile. Once it is given the position of the target with respect to the launch point and the initial position, velocity and acceleration of the missile, the Inertial Navigation System (INS) can guide the ballistic missile during the powered portion of its flight so that the payload acquires the precise required terminal velocity for a trajectory that terminates at the target. In concrete terms this is done by three accelerometers rigidly mounted on a platform stabilised by a gyroscope and suspended in gimbals. Even as the ballistic missile rotates and turns during flight, the three accelerometers are mounted in such a way that they always point to the direction of the target. Such an INS gives accurate guidance, but the instruments, bearings and gimbals must be engineered with a very high order of precision which can be provided by only a few manufacturers in the world. The INS system is costly, particularly for long range ballistic missiles where drift of the instruments must be kept to a minimum.

A potentially cheaper method of achieving guidance is by a strap down INS. As the name implies, the accelerometres and gyroscopes are fixed directly to, or are strapped down to the missile airframe itself. It is obvious that the missile’s inaccuracies as it rolls, drifts and drags through the atmosphere because of various extraneous factors are passed on to the strap down INS. As a thumb rule, ballistic missiles with ranges more than 1,500km ideally require INS guidance. A strap down INS would be unacceptable for ICBM ranges even with nuclear warheads. IRBMs with nuclear warheads and with ranges in excess of 3,000km may be un-suitable for strategic targetting.

So how do ballistic missiles compare with other delivery systems? Ballistic delivery is superior to delivery by aircraft or cruise missiles and rockets over short (measured in a few hundred kms) and very long (measured in a few thousand kms) ranges. For very short ranges we use artillery shells, for long ranges we use ballistic missiles. Militarily, they are better because there is no way to stop a re-entry vehicle or a cannon shell from reaching its target once it has been launched properly.