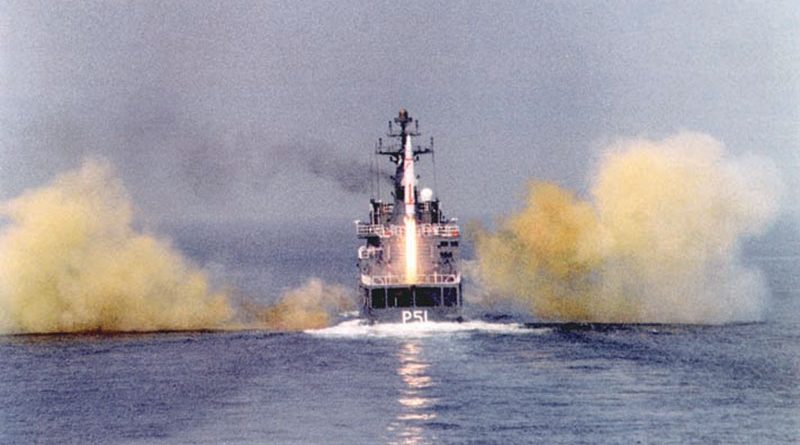 The primary technical challenge before the Third World missile developers is how to adopt a ballistic missile to naval launch conditions. It can be done in three ways. First, is by a silo-stowed and silo-launched design. This is an attractive option since it enables the ship to remain disguised as a harmless merchant vessel with the missiles hidden in the cargo hold. In addition, it permits a relatively large number of missiles to be carried, taking up a minimum of volume. Shipboard launch silo mainly involve developing a system to divert the hot exhaust gasses away from the missile fuselage during the first few seconds of launch. The second design option called silo-stowed and elevating-launch implies that the missile would be stowed vertically in the silo and will be elevated to the surface (deck) prior to launch. The main drawback of this option is that the elevator system provides an added level of technical complexity which would impact on the missile’s overall reliability. Unfortunately, India has little experience and expertise in silo-based ballistic missiles.

The third option called deck-erector-launcher is the preferred one by India. The erector-launcher is derived from the existing Tractor-Erector-Launcher which is used for the land-based system. Its two main drawbacks are that it would be relatively easily detected, and it would take up so much deck space that it would limit the number of missiles per ship. Neither of these problems is of much concern if the weapon system is designed for a single surprise mission, instead of a prolonged conflict, as the erector launcher could be camouflaged as cargo.


The next problem concerns the accuracy of such weapon systems. It goes without saying that nations which seek to have ballistic missiles on surface ships would not have the complex and expensive Submarine Inertial Navigation System (SINS) to determine the missile’s accuracy. For example, the Prithvi uses a simple strap down inertial guidance which is not sophisticated enough to autonomously correct for deviations in the launch. To overcome this problem, the DRDO seems to have taken cue from the Soviet Skorpion experiments. Instead of increasing missile accuracy, the Soviet navy attempted to compensate for wave motion by stabilising the launch platform itself. This was accomplished by using gyroscope technology derived from World War II-era naval gun turret stabilisation systems. Likewise, the DRDO is working on a host of technologies including launcher stabilisation and advanced fire control systems for the Dhanush.  Even as not much breakthrough has been achieved in this area, the use of ground positioning system (GPS)-based navigation system has been a big boost.

The DRDO is faced with another problem regarding the Dhanush. The ballistic missiles rely on aggressive hypergolic liquid rocket fuel. Its principal oxidant, the inhibited red fumic nitric acid, is a particularly hazardous substance in the close confines of a ship. Small fuel leaks can quickly lead to catastrophic results. Moreover, the Dhanush is fueled immediately prior to launch since the DRDO has yet not successfully developed the coating technologies to store hypergolic fuels inside the missile for prolonged periods. This means that the ship-based missile system will be relatively bulky with the fuel supply and handling system separate from the missile itself.