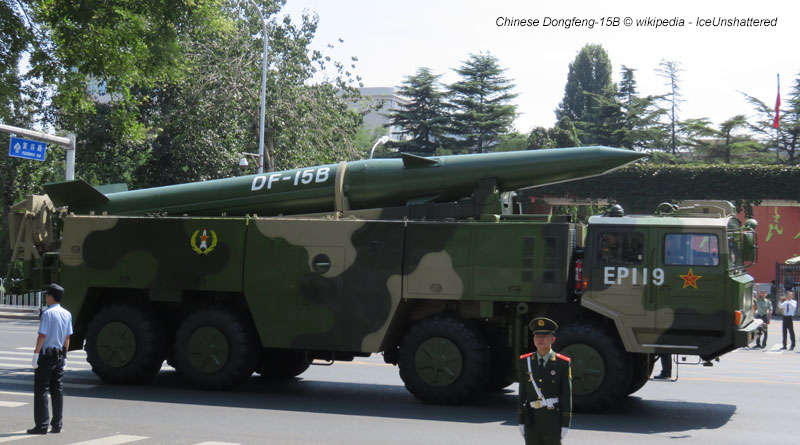 China, in the Eighties, made two significant breakthroughs regarding ballistic missiles. The PLA launched its first solid-fueled mobile missile, and it mastered the INS technology for improved accuracy. This led to a change in PLA’s doctrinal thinking: the value of Conventional Missile Force (CMF) over the Strategic Missile Force (SMF) increased manifold because they became more usable than nuclear ones. Besides, the CMF is in tune with its high-technology warfare where an important requirement is massive firepower. Such thinking has obliged the PLA to integrate conventionally-armed ballistic missiles into theatre united campaign programmes. Traditionally, the SMF in line with the nature and needs of nuclear warfare had confined its training to itself. United campaigns, which involve joint training of the army, air force and the navy, with the SMF had never figured high on the PLA war preparation programmes. This is no longer the case.

The CMF are being integrated with the Military Area Commands (MAC), a rough equivalent of a command in the case of the Indian Army. Presently, officers of the CMF participate in joint exercises and like the other specialised services join the headquarters of the united campaign in each MAC. It is natural that in due course dedicated units of the CMF as distinct from the SMF would be under the command and control of the united commander in war zones.

The CMF would be employed in conjunction with the air force to allow the latter to retain sorties for achieving air superiority. The CMF would also be used against targets which are heavily protected like communication centres, weapons delivery sites and aircraft carrier battle groups. As noted during the March 1996 military demonstration against Taiwan, the CMF would be employed in the initial stages of a conflict from widely dispersed sites. It is axiomatic that alongside greater terminal accuracy, the CMF would be seeking medium to short range ‘smart’ missiles. To be used for high-tech limited wars on China’s peripheries, the CMF would eventually have distinct new missile units separate from the SMF.


Presently, the SMF has a number of medium and short range missiles in its inventory which are dual-capable, meaning that they could be used with both nuclear and conventional warheads. These include the M-9 and M-11 missiles, known by the Chinese name of Dongfeng-15 and Dongfeng-11, which are mobile, use solid propellant with ranges of 600km and 300km respectively. Reports suggest that the guidance systems of these missiles have been improved by using radar-based terminal guidance system similar to the US Pershing II missile called the Radar Assisted Digital Area Guidance.

In a significant development to improve the CMF, the PLA has converted intermediate range ballistic missiles like the DF-21 and DF-25 initially intended for nuclear use into conventional ones. The DF-25 can throw a 2,000kg warhead up to 1,700km. With the command and control of CMF resting with the unified war zone commander instead of the distant CMC leadership which controls the SMF, large numbers of conventional missiles would be needed to make a credible conventional fire plan. Such numbers could run into hundreds of missiles.