Without proper appreciation of threats, defence budget will not help in defence preparedness

Given past trends and despite the Narendra Modi government’s declared commitment to national security, the 2019-2020 defence allocations are likely to see only a nominal increase, primarily catering for inflation.

Will it help in war preparedness? The answer to this question is obvious, as are the reasons which are well-known. However, there is another reason – important, but little known, and which would be the first of its kind in independent India.

First the known reasons. Figures show that in 2018-2019, of the defence allocation of Rs 2,79,305 crore (excluding defence pension of Rs 1,08,853 crore), only Rs 93,982 crore capital revenue was available for new acquisitions. The rest went into pay, allowances and upkeep of manpower.

Since the Indian army is manpower-intensive, most experts and the government believe that the 1.3 million (13 lakh) personnel should be reduced considerably for finances to be made available for modernisation.

This, however, will not happen beyond tweaking. Based on the assessment that army needs to combat twin threats – internal more than external – army chief General Bipin Rawat has announced hybrid warfare as the task for his force. This military strategy requires the army to fight unconventional (Pakistan-sponsored terrorism) war and prepare for conventional wars.


In military terms, this is linear warfare in single land domain, which requires other services – air force, navy and force multipliers like cyber, space and electronic warfare – to support army’s conventional war plans.

General Rawat’s operationalisation of the 2004 Cold Start doctrine by raising of Integrated Battle Groups (IBGs) soon for Pakistan and China are meant to give primacy to the army in this war. Clearly, hybrid warfare is manpower-intensive.

Based on the army’s threat assessment, which suits the Modi government’s political agenda of pipping Pakistan as the main enemy, and its foreign policy objective of labelling terrorism as the main threat to global peace, the army and the air force want to build war-fighting capability (weapons acquisitions) based upon the 2009 approved two-and-a-half front war-fighting agenda – conventional wars with Pakistan and China in addition to the proxy war.

Since the navy operates in open seas and the ocean, the two fronts become a single front for it.

The problems with the two-front capability-building plan are numerous. First, it is open-ended and cannot be supported by the apathetic indigenous defence-industrial complex. Second, it cannot be satisfactorily funded by limited defence acquisitions’ allocation. And finally, given the above constraints, the three services are abandoning their acquisition plans based on long-term perspective planning and are willing to grab whatever acquisitions are feasible, never mind if they are needed or not. This often leads to duplication of weapons within two services. For example, army has been buying long-range missiles meant for air defence which is air force’s responsibility.

Since neither the government nor the services believe there would be war, no service is happy spending its allocated frugal capital revenue on building up intangibles like ammunition stocks for war. Because India’s 41 public sector ordnance factories are incompetent to produce specialised or smart ammunition, it is no secret that the services, let alone the authorised 40 days ammunition, lack critical stocks for even a 10-day war. 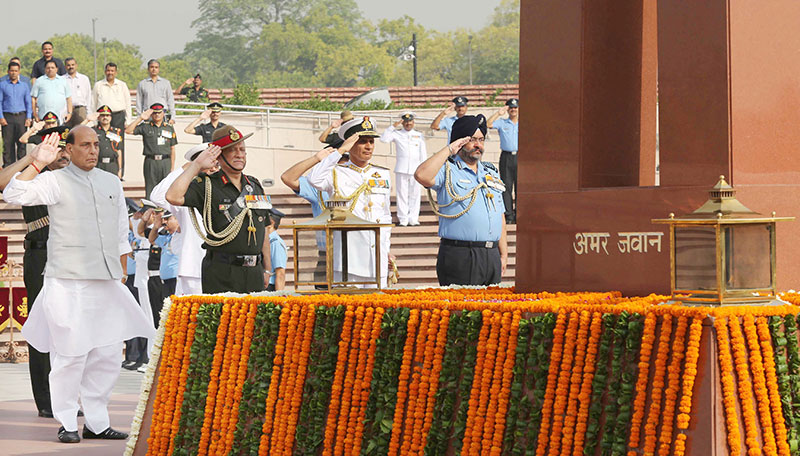 The story with weapon platforms is no different. Their procurements are preceded by an excruciatingly slow bureaucratic procedure which could take anything up to a decade from projection of requirement to its contract signing. Moreover, given that India is the largest global importer of arms, corruption charges usually plague purchases of expensive equipment, resulting in cancellation of tenders.

In order to fast-track acquisitions, ammunition et al, mostly from abroad, and to minimise the role of middlemen which results in corruption charges, the Modi government towards the fag end of its first term in office created the unprecedented Defence Planning Committee (DPC). Its stated purpose was to minimise corruption by resorting to direct government-to-government deals which would dispense with middlemen; to fast-track buys since the entire procurement procedure would be under the PMO’s watch; and to convey the importance the government accorded to national security matters.

Ironically, by creating the overarching DPC in April 2018 under the National Security Advisor (NSA) Ajit Doval, the Modi government defanged the defence minister by bringing the defence ministry’s principle function of procurements and planning under its wings.

Comprising defence services’ chiefs and three senior bureaucrats (from defence, finance and external affairs ministries), the DPC is meant to deliberate on four defence matters: policy and strategy, plans and capability development, defence diplomacy and defence manufacturing ecosystem for exports. The Chief of Integrated Defence Staff to the Chairman, Chiefs of Staff Committee, commonly referred to as chief of Integrated Defence Headquarters (IDH), which used to provide the secretariat to the defence ministry, will now, as member secretary, do the same for the DPC.

With the DPC, the service chiefs have been brought into the policy-making loop, even if by default without altering the Government of India (Allocation of Business) Rules, 1961, while the defence minister, who is a member of the Cabinet Committee on Security (CCS), has been left out of the policy-making procedure, now to be done exclusively by bureaucrats and service chiefs.

The defence minister’s role is now purely ceremonial. At best, he will travel the length and breadth of the country raising the morale of the troops that he can no longer provide for. Moreover, by elevating NSA Doval to cabinet minister rank, and given his proximity to the prime minister, defence minister Rajnath Singh has been reduced to rubber stamping DPC decisions.

All this will now be dramatically shortened. Now, once the DPC approves a proposal, the defence minister would only be required to sign it before the CCS clearance. It is axiomatic that the NSA-headed DPC would get the prime minister’s green signal before approving any procurement file, with no one (DAC and finance ministry) raising objections to it.

And now the little-known reason why defence preparedness would remain a pipe dream. The unstated purpose of the DPC is to use defence imports to balance foreign policy imperatives in a multi-polar world with minimum fuss or media probing and without having to acknowledge China’s humongous military might.

The new policy of buying weapons from both the US and Russia to propitiate them was explained by foreign secretary, Vijay Gokhale at the January 2018 Raisina Dialogue: ‘India is today an aligned state – but based on issues.’

The biggest issue was the People’s Liberation Army’s extensive build-up in Tibet Autonomous Region in the winter of 2017-2018 immediately after the June-August 2017 Doklam stand-off, when the Modi government, with general elections around the corner, panicked. This led to the May 2018 informal summit at Sochi between Prime Minister Narendra Modi and Russian President Vladimir Putin.

Putin became the guarantor of ‘military restraint’ agreed to at the April 2018 Wuhan informal summit between Modi and Xi. In return, Modi signed the long pending S-400 anti-missile defence system deal. Since the US Trump administration was not happy about this, India agreed to buy its National Advanced Surface to Air Missile System-II (NASAM-II) on balance.

At the recent Paris Air Show, senior officials from Raytheon confirmed to me that the US’s Terminal High Altitude Air Defence (THAAD) system which is an anti-ballistic missile has not been offered to India. Instead, NASAMS-II, which can only kill cruise missiles and unmanned aerial vehicles (not ballistic missile), was on the table. Now, why should India buy NASAMS-II when it has already signed for S-400 which is proven anti-ballistic missile defence system? Perhaps, as part of the new ‘aligned policy.’

Similarly, between buying additional US P-8I aircraft and submarines, the navy would any day go for sea-denial submarines. There is little gainsaying that buying both S-400 and NASAMS-II would not be possible under the old procurement system without enough eyebrows being raised.

Moreover, since buying equipment should be predicated on assessed threat, is hybrid war (focused on Pakistan) the main threat? The short answer is no. China is both the immediate and the main military threat to India which has escalated substantially since Doklam. Before Doklam, the threat was from PLA’s excellent border management, which helped it to transgress the 3,488km long Line of Actual Control at will. All border transgressions, to be sure, have been one-sided, with India and its army always on the back foot. The good thing about this threat was that it was linear, with the Indian Army responsible for policing the disputed border.

After the PLA build-up in TAR, Chinese forces-in-being under its 2016 raised Western Theatre Command against India is the new threat. This threat is multi-dimensional involving seven war domains (battlefields), namely, land, air, sea, deep sea, space, cyber and electronic warfare (EW). Unlike the Indian military which assess non-kinetic war domains like cyber, space and EW as mere force multipliers, the US has assessed them many notches higher as force itself.

For example, the US believes that China’s counter-space warfare capabilities – anti-satellite capabilities across all space orbitals, co-orbital weapons, directed energy weapons – coupled with its cyber and electronic warfare capabilities have made their network centricity which is the heart of Information Warfare extremely vulnerable.

Moreover, PLA has massive missiles (ballistic and cruise) capabilities of varied ranges. They have now added hypersonic missiles and hypersonic glide vehicles into their inventory. Then, there are armed and unarmed unmanned aerial vehicles. For example, PLA’s CH-7 long-range, high-altitude stealth combat drone which can be flown from an aircraft carrier would join service by 2022. All this is the tip of the iceberg. The point to consider is that India’s military capabilities are decreasing in direct proportion to PLA’s.

Analysts who lament that India’s annual defence budget of USD 50 billion is too little should consider Russia’s annual allocation of USD 69 billion. Russia has resurrected its military might primarily because it identified the correct adversaries, its military kept abreast of changing warfare, its political leadership understood the importance of technological and military power in foreign policy, and that no country gives away its well-guarded technology to anyone — neither friends nor allies.

Russia is not frittering away its meagre defence financial resources. A sobering thought to ponder upon on in the run-up to this year’s union budget.