Why the Himalayan conflict will be a ‘no-win’ for India and China. An extract 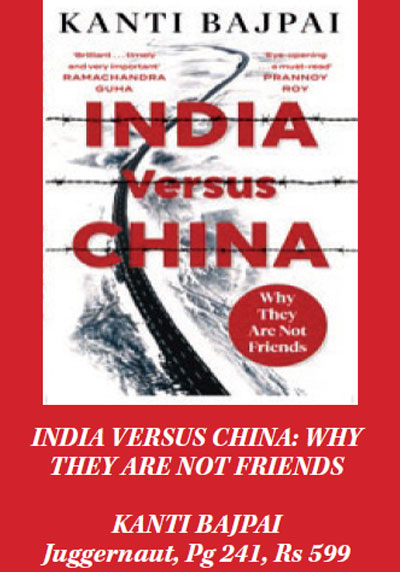 Since the primary theatre of active military confrontation between India and China is the border, it is best to begin with the army and air balance. At last count, in 2020, according to the International Institute of Strategic Studies (IISS) in London, India’s armed forces personnel numbered roughly 1.4 million as against China’s 2 million. Of these, their armies accounted for 1.237 million and 975,000, respectively, the Chinese having downsized dramatically in a modernization drive. Backing up the troops will be artillery and, to a lesser extent, armour (primarily tanks). In 2020, India had 10,913 artillery pieces where China had 9196. In the case of tanks, the imbalance was reversed: India had 3565 tanks while China had 5850 tanks. In 1962, neither India nor China used their combat aircraft. That kind of restraint is unlikely in the future. As for air power, in 2020, India was outnumbered by a factor of three: 850 aircraft against 2921 aircraft.

What do these numbers tell us about the ground and air balance between the two militaries? India has slightly more ground forces and artillery pieces but is behind in the number of tanks. This suggests that quantitatively the two forces are in rough balance along the border. However, not all troops serve on the India-China border. India deploys large numbers against Pakistan and on internal security in counter-insurgency missions as well. China has fourteen land neighbours (along with Russia, the largest number of neighbours in the world), and it cannot therefore devote them all to the border with India. It too needs forces for internal security. No easy conclusion about the balance in ground forces can be derived from the numbers, though the disparity in tanks is glaring. The air balance is distinctly lopsided, and since aircraft can be moved around quickly in case of war, the gap in numbers in significant. Admittedly, this is pure ‘bean counting’—just going by the numbers of weapons and not their quality—but it gives us a snapshot of the military relationship.

If the quality of weapons on both sides as well as the quality of manpower, leadership, and fighting spirit on both sides are more or less equivalent, the crucial factors in case of actual combat will be strategy and logistics. The word strategy has many connotations, but here it simply refers to the application of force at various levels against an opponent, from basic decisions about whether to go on offence or emphasize defence, to more tactical decisions about how to fight on the battlefield. Logistics refers to the supply of warfighting and other materials to the military, as well as the ability to move units in and out of battle and within battles.

In the Second World War, the German military was outgunned by French and British forces in every major weapon system. However, its blitzkrieg strategy in 1940 decimated Allied forces in six weeks. The key elements of German strategy were the concentration of highly mobile forces led by tanks, the use of surprise, and the massive use of dive-bombers in support of ground forces that broke through French and British lines and raced towards Paris causing a collapse of Allied defences. Crucially, the Germans delivered supplies efficiently in the field to sustain their advances. In sum, strategy and logistics proved decisive against superior numbers.

For a variety of reasons, war between India and China will be quite different. Terrain will not permit a blitzkrieg: the Himalaya are not the plains of France. Yet the broad principles of modern warfare cannot be ignored: the ability to concentrate forces, to support ground forces with devastating air attacks, to achieve surprise, to advance rapidly towards command-and-control centres, to interrupt communications and disrupt decision-making, and to supply fast-moving forces. Despite a balance of military power, the right offensive strategy can bring victory. Equally, defending forces must pay attention to the ability to locate and move quickly to counter the opponent’s massing forces, to prevent the attacker’s air force achieving superiority in the skies, to launch unexpected counteroffensives, to maintain communication and orderly retreats and regrouping, and to supply even embattled and surrounded units. An offence can be blunted by a nimble defence.

Assuming that China is not interested in a war of outright conquest in Ladakh or even in Arunachal Pradesh (despite its claims to the entire state), its options along the border come down to three possibilities. The first is an attack along a broad front as in 1962. The second is to attack in key sectors where its forces can concentrate and achieve local superiority. The third is to go behind India’s lines using infiltrating or air-dropped special forces, even as a frontal attack serves to distract and to pin down Indian border units. An attack across a broad front would be a punitive war or bargaining war. It is hard to imagine any goals other than to get India to accept certain kinds of economic or political conditions, to diminish its status internationally, or to occupy territory as a bargaining chip towards a final settlement of the border on China’s terms. An attack in key sectors would aim to better protect Chinese infrastructure and to put Indian infrastructure at a disadvantage: this seems to have been one of the objectives of the Ladakh incursions in April 2020. A special forces attack would be motivated by the same objective as limited sectoral attack but would use a different instrument, namely, an attack to surprise and overwhelm Indian border positions from behind rather than in a sustained frontal attack.

What are India’s options in defending against these three types of attacks? Let’s deal with the least likely attack first—the use of special forces behind India’s border forces in combination with a frontal attack. This is China’s riskiest option. The first difficulty is getting behind Indian forces either by ground infiltration or by airdrop in the hazardous Himalayan terrain. The second is that even if the infiltration succeeds, it must evade Indian special forces and other units deployed in a layered defence that are primed to react quickly and hunt down intruders. Should the Chinese special forces fail to evade Indian counterattacks, they would be captured and destroyed, handling India a strategic and public relations victory. More likely, then, is a Chinese push against Indian forces along a broad front or a grab of strategic ground in key sectors. Either way, the difficulties for China are terrain and Indian counterattacks. In many places the fighting will occur at heights of 4000 metres and above, where no armies have ever fought before (except the Indians and Pakistanis at Siachen and the Indians and Chinese in 1962). Even with acclimatized troops, any extended military operations will test troop endurance to the limit. In the winter, operations will be almost impossible given the cold and the snow.

If the Chinese make any significant gains or breakthroughs, they will confront the problem of supplying their units. The further they come, the greater their supply problems, and the easier it will be for the Indian Army to sustain its forces: in military parlance. The Chinese will have the ‘exterior lines’ while the Indians will have the ‘interior lines’. Furthermore, despite China’s massive developments in infrastructure in Tibet, logistical problems will hobble Chinese forces. The Tibetan Plateau with its flat terrain enables road and rail communications: but the flatness of the terrain means its facilities are difficult to hide and are therefore vulnerable to air and missile attacks. India’s infrastructure is relatively weak, but it has one advantage. Many of the key roads leading to the front are narrow and twisting. This slows Indian supplies, but if the Chinese broke through Indian lines they would have to slowly weave their way down these very same roads making them highly vulnerable. Indian air, artillery, and missile fire would be able to decimate the incoming force. In addition, the further the Chinese come, the more vulnerable they will be to counterattacks. The Indian counterattacks could come against positions where the Chinese have made gains but also in other areas where India has local superiority. The result would be a chequerboard, where the Chinese gain here, and the Indians gain there. Overall, China might not be in a better position.

INDIA VERSUS CHINA: WHY THEY ARE NOT FRIENDS
Kanti Bajpai
Juggernaut, Pg 241, Rs 599