Repression is the real ‘deep state’ of India. An extract from Dr N.C. Asthana’s forthcoming book State Persecution of Minorities and Underprivileged in India 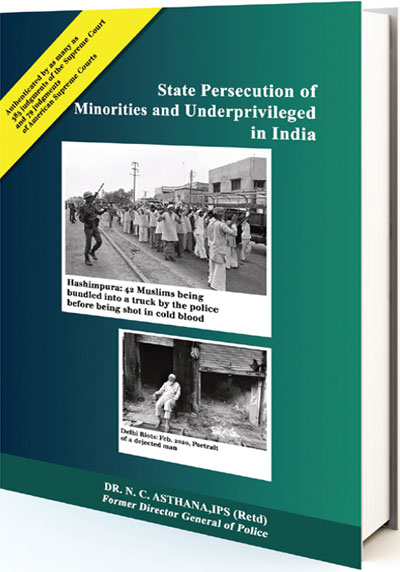 No other country of the world registers as many cases against its own citizens for having committed offences against the State as India does—they include ‘hurting of religious sentiments’, sedition, and the UAPA (Unlawful Activities Prevention Act). In simple, non-legal terms, anything you do against the government can be stretched to mean a terrorist act. People have been charged with sedition for liking a Facebook post, criticising a yoga guru, cheering a rival cricket team, drawing cartoons, asking a provocative question in a university exam, or not standing up in a cinema when the national anthem was being played!

Have we ever wondered why? There can be only two possibilities. If all these cases are genuine, it can only mean that there is clearly something fundamentally wrong with the nation-state of India. Either the manner in which this nation was created was defective or the people of this country have no love lost for their country. Alternatively, they are false cases foisted upon innocent people.

We are now in a paradoxical situation where constitutional values are being violated in the name of upholding the law. Law enforcement having metamorphosed into the dreaded ‘coercive arm of the State’, means that the ‘thought’ comes from the State, which, in turn, is executed by the ‘muscle’ of the law enforcement. Law has, in fact, been ‘weaponized’ by the State as the most preferred tool of persecution of all those who dissent. By using law as a weapon, this nation is now shooting from the cloak of law to murder justice!

In a police State, as its definition goes, the government abuses its legal powers over its citizens. We have, however, become worse than a police State because the legal powers are used to ‘selectively’ target and persecute a part of the citizenry. The great Chinese strategist Sun Tzu had said, “Kill one frighten ten thousand”. This has been modified by the Indian State as, “Implicate one in a false case; frighten ten thousand.”

As a result, injustice has become the norm; justice only an aberration, with the quality of justice one could hope to get being directly proportional to the amount one could spend.

Amongst the judgments cited in the book, there are many in which innocent Muslim youths were falsely implicated under terror charges but got acquitted later. They could get justice only after their lives, families, livelihoods, and social prestige; everything was destroyed by the unjust incarceration of up to two decades. What do these acquittals prove? They prove that they were falsely implicated because the State went out of the way to bolster a divisive and politically expedient narrative that projects Muslims as compulsive traitors. The acquittals also prove that the State never knew who the real culprits were. They are still hiding somewhere, ready to strike again. This means that, contrary to the claims of the State, the act of foisting false cases in the name of national security has actually been endangering national security!

How Democracy is imperilled today in India?

Democracies do not die necessarily by guns of coups d’état or in bloody street riots; they die when the institutions of democracy are quietly subverted by elected leaders. Democracies die when rivals are treated as enemies; when the media is intimidated or bought; when the State assumes greater and greater legal powers; and when the legal powers are abused with abandon.

The electoral road to breakdown is dangerously deceptive. Elected autocrats maintain a veneer of democracy while eviscerating its substance. Any failure of the regime can be wrapped in the flag and it becomes inviolable.

Trials and Tribulations of living under an Imperious State

Our great nation has had the privilege of having its law defined in a large number of extremely bold, eloquent and progressive judgments of the Hon’ble Supreme Court. Unfortunately, there is a huge and frustrating gap between what is lawfully expected of the State and what it delivers to its citizens.

If the police are able to regularly defy the orders of the Supreme Court, it is because they are assured of protection by a partisan State or the party in power whose political agenda they seek to further.

Application of the laws by the State has become highly discriminatory in character and is loaded heavily against the minorities and the poor—in general, anybody who is perceived as dissatisfied or disagreeing with the regime.

Predicament of the Minorities in India today

An analysis of the functioning of the police since independence shows that, far from upholding the law, police have been acting as the agents of the communal forces and a partisan State. Majoritarian narrative is seldom questioned by the State and majoritarian violence is seldom punished. Riots take place all the time because rioters know that they will perhaps never be punished.

Unfortunately for our beloved country, the ‘beast within the collective subconscious of the people’ has been awakened and made to unleash all its fury without any feeling of guilt and with pro-active facilitation by the State.

Minorities in today’s India have a lot to despair of and much more to be afraid of as they face the ‘double whammy’—the combined might of the ‘hostile’ majority and the State using every trick in the book to debase them, to humiliate them, to injure their dignity and self-respect so much that they accept their existence as ‘vanquished people’, if not sub-humans, the Untermensch of the Nazis—surviving at the mercy of the majority in a land they are ‘historically’ not entitled to stand on.

Emboldened by the record of a ‘wilful systemic failure’ to punish the guilty, the majoritarian supremacist elements of this country have realised that the most effective method of subjugating the minorities is to deny them justice! A clever exploitation of the criminal justice system is the key to keep the minorities tyrannised while the State could continue pretending to ride the moral high horse.

Justice has eluded the victims of majoritarian violence all along because a partisan police, acting as the handmaiden of the majority, neither wanted nor ever tried honestly for ensuring justice. Under such situations, we wonder what reason and what hope the minorities could have from the Indian State.

As we know, all the 32 accused in the Babri Masjid demolition case were acquitted by the trial Court. If the CBI does not file an appeal in the High Court against the verdict, it can only mean that the State or the party in power does not want to file an appeal for fear of alienating the majority, riding on whose sentiments they had grabbed power.

For the notorious Hashimpura massacre of 42 Muslims by the UP police itself, it took over 31 years for the guilty policemen to be convicted by the Delhi High Court in 2018. The High Court concluded, “A disturbing aspect of the present case is the targeted killings of persons belonging to one minority community… This was a case of a targeted killing revealing an institutional bias within the law enforcement agents.”

The culprits of the massacre of 72 Muslims in Maliyana are yet to be punished 34 years later also—the case has been adjourned 900 times!

In almost every communal riot of this country, whether it was Delhi (1984) or Delhi (2020), police have always been found to let the minorities ‘suffer’ at the hands of the majority, or ‘punish’ them by implicating them in false cases. Surprisingly, as far as the complicity of the State is concerned, nothing at all changed all these years, even as the country came to be ruled by political parties of different ideologies! To paraphrase Alfred Tennyson, “For parties may come and parties may go, but the imperious State goes on forever.”

The Bleak Future of Dissent

The Indian society is now being driven by a strictly binary system. Either you conform to the majoritarian narrative or you are a traitor of some sort; jihadi, urban Naxal, ISI agent, whatever, who must be jailed or banished by the State.

We do not have any totalitarian secret police like the KGB or the Stasi. So far, fortunately, nobody disappears in the night and we do not have any Gulag Archipelago either. Arguably, Indians are not un-free but, paradoxically, we are not free either.

The primary objective of the Indian State is to keep the people terrified of the State and thus subjugated.

If the Motherland has to survive and thrive as the nation its Founding Fathers had so fondly hoped it to be, we must collectively strive to ensure that everybody receives justice without any discrimination. Freedoms and justice cannot be selective. Peace without justice is a dangerous myth because no question is ever settled unless it is settled right.