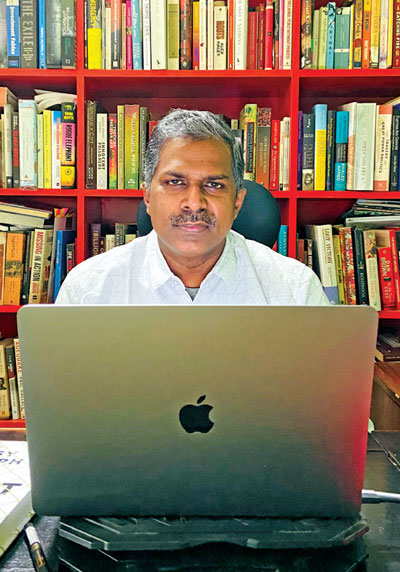 What drove you to write this book?

What drove me to write this book was the fact that I have had a ringside view of the Indian security establishment for almost two and a half decades, both the military and the non-military arms.

I got angry and astonished at the way the institution, and especially the non-military part of the establishment including agencies such as the police, the CBI, ED, DRI, and the Income Tax etc behave. Their degeneration has been happening in front of our eyes and nobody seems to be either acknowledging it or bothered about it.

The political masters are taking turns in misusing them. Those in power would misuse the agencies to create distorted narratives against their narratives, to silence their critics etc. Since I understood this world, and its implications for democracy, I decided that I will have to write it. There are somethings you cannot postpone. This was one such book.

Given the prevailing situation in the country, how difficult was it to strike a balance between what you said and what you left unsaid? What kind of limitations did it impose upon you as a writer?

If you see the book, I haven’t left anything unsaid. I may have left out things which did not fit into my narrative, or some I was unable to recall, or about which I didn’t have full information. But whatever I was confident about and knew the facts I have not left out anything.

You will also figure out that from very early in the book I am also parallelly examining the security architecture that Narendra Modi built in Gujarat, and which is now being implemented from Delhi, a lot of which the Congress created in the past. Modi has an unparalleled understanding of the sinister capabilities of this security architecture.

When I am writing into my computer fear is not my emotion. When you are writing books on contemporary issues, trying to think through the implications of your words, what might happen in the future if you tell the story, it will actually have a negative impact on the words you write. For a writer who is analysing contemporary world, it is important that his emotions, his anger, his tears, his disappointments, all of it should flow through his fingertips onto the keyboard.

A large part of your book is based on your reportage. In my experience, perspective often changes with the benefit of distance. How has your perspective evolved from your reporting days, especially on issues like Kashmir, terrorism in the hinterland, laws such as UAPA (and the earlier POTA) and so on?

Ghazala, you very well know that all of us reporters have regularly been taken for a ride by security establishment. The propaganda arms of the agencies are so active that we don’t even get the time to figure them out, especially when you are beat reporters with deadline pressures.

I used to cover beats like defence, intelligence, white collar crime agencies, CBI etc. Their propaganda often misleads you. It’s much later when you sit back and think through, especially in the light of court judgements or new evidence that you realize that you were effectively a propaganda tool in the arm of the establishment. It makes you angry because I don’t think in a democracy you should accept such propagandist approach by agencies because their job is to serve the democracy not to serve someone’s fantasies.

Yes, in lot of way, the book is based on my perspectives of things that I’ve reported, and I’ve heard in the past and I am sure you would agree that all of us are sitting in anger, disappointment and sadness about what we were forced to do by the state and its arms and how we ended up probably damaging people’s reputations in life and it’s narrative. That is what happens in most countries, especially in illiberal democracies like ours.

Many Indians, labelled as liberals, despair about the future of India. What causes you despair and what is your source of optimism?

I do sometimes wonder whether we are living through the last stages of democracy because we can very well see the architecture of an authoritarian state taking shape. The authoritarian state is already in place at the top and is a reality already on the streets in many states like Uttar Pradesh.

Many of us are feeling helpless at the way the Gandhian, Nehruvian liberal democratic state is being demolished inch by inch by almost every person wielding power, whether it is a political party, the government of the day, or the corporates.

However, as writers and journalists we have no right to despair. It’s our job to get up every morning in the hope that our next line and the next paragraph, the next story and the next book, will improve this democracy. And that’s precisely what I am trying to do despite all kinds of possible adverse prospects that you can imagine.

How do we start the process of reclaiming the democratic space for dissent, criticism and protest? How do we reverse the subversion of our democracy?

Reclaiming this democracy, building India into a liberal democracy is going to be a long and painful process. We may not achieve this in our lifetimes. But we have to push back, we have to reclaim the democratic space. I think the first thing is to fearlessly debate in the public place, not in Signal or WhatsApp groups.

Public, fearless debate and critique of those in power—corporates that are subverting democracy, politicians who have blood on their hands, governments that are subverting the Constitution, and the agencies that are the tools of them. We need to speak louder in the public square, we need to write firmer with confidence, and we need to show those in power that their intimidations, their subversive activities and efforts to challenge our freedom of expression and courage will not intimidate us.

They will be met with mock and ridicule from our side, and that we will not be intimidated. The moment we show them that we are afraid, that we are fearful of their retaliatory action, they win the game. I think the most important thing for reclaiming this democracy is for all of us to forget fear as an emotion. We need to be courageous, strong, stand up and believe that we are the real custodians of this democracy. They are mere saboteurs and temporary subversive elements who need to be weeded out.