How the Modi government compromised India’s national security. An extract 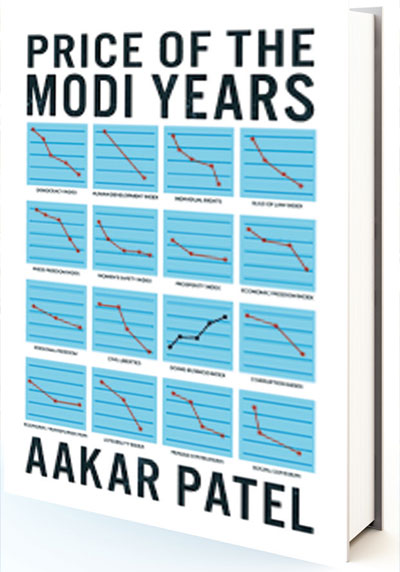 On the face of it, national security is the most important aspect of government, according to the BJP—at least it was in 2019. In the election manifesto of that year, Amit Shah wrote: ‘Friends, this election is not merely to elect a government, it is an election to ensure the country’s national security.’

Both Modi manifestos carried the statements ‘Nation First’ and ‘India First’ which were apparently axiomatic. Did ‘India’ mean its people or its territory or something else? And what did ‘first’ mean? Ahead of what or whom and at the expense of what? All that was assumed to be understood by voters and left unexplained.

The first point of the 2019 manifesto was ‘zero tolerance approach to terrorism’. It claimed, ‘Modi has fundamentally altered the national security paradigm of India in the last five years.’

The confident tone continued: ‘India is now in a position to adopt an independent stand on national security, to successfully strive to strengthen our armed forces and to lead the world in various spheres. In the field of space too, India has emerged as a global power.’ (It was unclear how and when Indian became a global power in space, given that it had not even put a man into orbit unlike the USSR, US, Russia, China and the private firm, SpaceX.)

Shah added: ‘Our security doctrine will be guided by our national security interest only. This is exemplified by the Surgical Strikes and the air strikes carried out recently. We will continue our policy of “Zero Tolerance” against terrorism and extremism and will continue to follow our policy of giving a free hand to our security forces in combating terrorism.’

The belief was that Modi’s ordering of these two attacks in September 2016 and February 2019 had ‘fundamentally altered the national security paradigm of India.’

To what extent was this true?

To understand the background to this we have to look at what is called the Doval Doctrine. This is not a written text and has never been articulated in a book. This is because India doesn’t have an intellectual national security advisor of the Henry Kissinger school, but a man of action and the field. Ajit Doval did not waste his time on thesis and dissertation; he got down to it.

In a profile which lampooned him, A.G. Noorani wrote, ‘Doval does not hesitate to roll up his sleeves and get into action. He went to Iraq on a rescue mission for Indians taken hostage by the Islamic State; organised the Indian Army’s “hot pursuit” into Myanmar and then went over to smoothen ruffled feathers; phoned Pakistan’s High Commissioner in New Delhi and instructed his counterpart in Islamabad to berate Pakistan for the firings on the LoC; supervised, astonishingly, the arrangements for crowd control at the funeral of Yakub Memon in Mumbai; questioned the Delhi Police on the Uber cab rape case; and much else. This is a real man of action, the kind of whom we have never seen before.’

And all this was only in the first year and a half of the Modi government.

So what is the Doval Doctrine? It may not be out yet in print, but it is available on video.

In February 2014, a few weeks before he became national security advisor, Doval spoke at the Sastra University in Thanjavur. During his speech, he made the following points.

Having identified the enemy, he asked the question, ‘How do you tackle Pakistan? And then proceeded to explain.

The problem of India’s national security strategy was Pakistan’s ability for sub-conventional warfare (cross-border terrorism and militancy) and India’s inability to escalate militarily in response because of the nuclear threat.

Doval said: ‘I talked about their having the nuclear threshold, having the strategic weapons systems, missiles, strategic partnership with China. How do we tackle this?’

It was simple. He said: ‘You know we engage an enemy in three modes. One is a defence mode. Chowkidars and chaprasis. That if somebody comes here we will prevent him (from entering). One is defensive-offence. To defend ourselves we will go to the place from where the offence is coming. (The) third is the offensive mode where you go outright. Nuclear threshold is a difficulty in the offensive mode, but not in the defensive-offence.’

At the moment, he said, meaning under Manmohan Singh, ‘we work only in the defensive mode’.

What he was recommending was that India attack Pakistan in various ways short of conventional war. In his words: ‘…working on the vulnerability of Pakistan. It can be economy, internal security, it can be political. International isolation. I am not going into details. But … you change the engagement from defensive mode.’

‘You throw hundred stones on me. I stop ninety but ten still hurt me. I can never win. Either I lose or there is a stalemate. You start war at your time, throw the stone with what you want, you talk when you want, you have peace when you want.

‘If you have defensive-offence we will see where the balance of the equilibrium is. Pakistan’s vulnerability is many, many times higher than that of India. Once they know that India has shifted its gear from defensive to defensive-offence they will find that it is unaffordable for them. You can do one Mumbai, you may lose Balochistan. There is no nuclear war involved. There is no engagement of troops. If you know the tricks we know the tricks better than you.

‘Our only difficulty has been we have been in the defensive mode. If we had been in defensive-offence mode we could have reduced the casualties we have suffered.’

This was the Doval Doctrine. It posited India’s strategic threat as terrorism from Pakistan, and its response was to do unto the enemy what was being done to you. Sastra University tweeted out this speech and Subramanian Swamy, the maverick in the BJP, tweeted in reply that ‘defence strategy cannot be announced as in a fast food counter’.

It should not be surprising then that-given this quality of intellectual engagement with its reduction, focus on imaginary enemies inside and obliviousness to geopolitics—India’s national security has deteriorated in the Modi years. The primary problem lies, once again, in the lack of application of thought, Modi does not want to, and perhaps cannot, take ownership of national security because it is a serious intellectual exercise. He was presented with the thesis from Doval, which said that Pakistan, specifically cross border terrorism, was the primary national security threat. He embraced it. Addressing his first Combined Commanders’ Conference, Modi reinforced this perception to the Indian military. He de-emphasized threats from other States (‘full scale wars may be rare’) and stressed that terrorism was India’s primary national security threat, saying that the threats may be known, but the enemy may be invisible. India’s prime minister believes and insists that terrorism is not just the primary threat to India but to the world. He said it at a BRICS summit, on a visit to Africa, to the Maldives, at the United Nations, and while addressing the United States Congress, to whom he stated, ‘Globally, terrorism remains the biggest threat.’

But this idea that terrorism is the primary threat has proved itself to be untrue during the Modi years itself, when Xi played his card and the national security strategy was upended.

Terrorism in Jammu and Kashmir is a political problem and not a military one. But that is unacceptable to Modi’s closed way of thinking, which sees ‘terrorism’ and ‘separatism’ in a particular light, and views only force as a solution.

Pakistan and terrorism has remained the focus of the defence establishment, which was used as a political tool in the mindless spectacle of the ‘surgical strike’ and the Balakot attack.

Previous Union governments, lacking a majority in the entire period after the Kashmir insurgency began in 1990, indulged the army by going along with its fantastic ideas of a ‘two-front war’. This was finessed recently as ‘hybrid war’, and even ‘two-and-a-half-front war’. Meaning that the army would be organised to handle both Pakistan and China along with a raging insurgency which it would also be responsible for tackling, as it is still doing. This was a plan that has fructified due to political inertia.

Lacking a majority and vulnerable to accusations, especially from the BJP, that they were being soft, governments resisted engaging Pakistan meaningfully. They also resisted engaging Kashmiris for the same reason, and after the arrival of Modi, the engagement there was purely on hostile and adversarial terms. Modi had the space and the political capital to settle Kashmir and make peace with Pakistan. This would have allowed the military establishment to focus India’s national security on China, which is and will remain into the future, to anyone who is not wearing blinkers, India’s primary strategic threat.

Modi was not able to do this and did not attempt to. He lacks the intellectual heft and his prejudice hampers his imagination. The inability to think in depth carried into his dramatic 2019 action on Kashmir, gutting Article 370 and taking away its statehood. An action aimed solely at his domestic constituency, and meant to bolster his image as a man of firm action, Modi could not bring himself to consider what his Kashmir move meant for national security. Because of it, China no longer recognised Ladakh—any part of it—as Indian territory and insisted that the position after Modi’s action was that of 1948, as it stood in the United Nations (UN), with Kashmir’s accession under question. Kashmir itself was fully under the rule of the Indian gun. This was seen as Modi ‘settling’ an old issue, though it is hard to see how. It had, in fact, been deliberately and mindlessly unsettled.