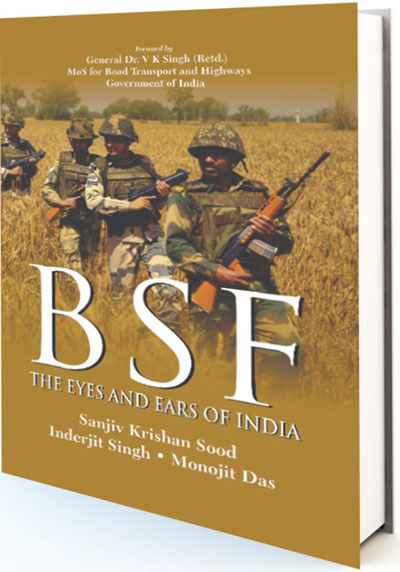 The general public, unable to distinguish the Border Security Force (BSF) from the army, generally thinks of it as an extension of ‘fauj’. On the other hand, when functioning in internal security environment, the identity of the BSF gets subsumed as a police or a security force.

Border Security Force: The Eyes and Ears of India is, therefore, one book which was the need of the hour. The book addresses important aspects of the role of the BSF, in the security matrix of the India, what are its tasks and how has it contributed to the national security. Both internal security and external aggression are the aspects which needed to be highlighted and the book does this adequately.

The book is an honest effort to give the readers an insight into the formidable tasks being performed by the BSF—the largest border guarding force of the world—in the national security dynamics. Authored by a veteran of the force, additional director general, BSF Sanjiv Krishan Sood (retd), associate professor, department of defence and strategic studies, Punjab University, Dr Inderjit Singh and a research scholar, Monojit Das, the book presents a structured panorama and gives insight into various facets of the BSF.

The book has seven chapters with each chapter leading to the next in a chronological and progressive sequence. Starting with historical evolution of borders of India, the book takes the reader through evolution of border management in India and evolution of the BSF in the first three chapters.

Chapter Four lists valour of the BSF battalions, officers and men in augmenting war efforts of the Indian Army, which ultimately led to historic surrender of the Pakistan Army and Indian victory in 1971. Contribution of the BSF to the war effort was recognised by no less than the then Prime Minister Indira Gandhi. The book provides an opportunity to the BSF battalions and leadership to connect themselves with the glorious past of the force and its historic achievements in an inspirational manner. The role played by the BSF in Kargil 1999 is a classic example of versatility and effectiveness of the force as the area manned by the BSF could not be intruded into by Pakistan.

The fifth chapter deals with contributions made by the BSF in national security encompassing internal security and unrecognised facets like ensuring free and fair elections, its role during natural calamities and disasters and above all keeping border population integrated with national mainstream despite extreme frustrations of locals due to conflicting interests. In internal security dynamics, the force besides guarding the borders has played an important role in controlling militancy in the Northeast, Jammu and Kashmir and Punjab. Large force strength is combating Left-Wing Extremism (LWE) in central India and contributing to development of Naxal-affected regions. The chapter also highlights role of the BSF in controlling insurgency in Northeastern states of Mizoram, Nagaland and Manipur besides Punjab and Jammu and Kashmir.

Both these chapters bring out the grit and determination of the BSF men in ensuring peace and stability in internal and external security environment. The book will help today’s leadership to understand the rich operational history of the BSF and also adequately highlight the BSF role during war and peace in public domain.

Chapters Six and Seven deal with the challenges that the BSF faces along the India-Pakistan and India-Bangladesh borders and recommendations for the leaders of the force and the government. These chapters adequately cover these aspects considering the scope is limited to making general masses aware of the organisation. However, the scope remains for further elaborating on these aspects. Perhaps the authors can take up this as their new project. Issue of deployment under Army Operational Control on the Line of Control (LC) and contingency of the LC being converted into an International Border (IB) sometimes in the future can also form part of that project.


The authors, through a well-structured theme and progressive content, have succeeded in highlighting the achievements of the force and correcting the perception that the army guards international borders. The simple language makes the book an interesting read. The title, Border Security Force: The Eyes and Ears of India, instantly conveys the importance of the BSF in internal and external security dynamics of India and its all-important role during war and peace.

The contents in terms of quality and quantity are adequate and interesting. The book brings all facets of the BSF history, its glorious past, and functioning on one platform which should help the BSF update its historical profile and standard operating procedures.

The book is recommended as a compulsory reading for the young generation of the BSF and CPMF officers and men in order to make them aware of the sacrifices of the BSF officers and men and the saga of their valour. The book is also recommended for study by scholars of defence and public policy experts and civilians in order to understand how the border scape functions and how various agencies work in synergy for welfare of border population in order to integrate them into the national mainstream.