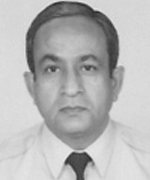 ‘A King should be mighty in action as in name, for nobody will believe in strength which is never displayed’

Both China and India are continentalsize nations. This geographical reality, their non-aggressive history and the contemporary views on wars, to occupy other’s territory, rule out war for conquest. It also rules out total unlimited war, so characteristic of WW I and WW

The terrain adjoining border areas in Tibet Autonomous Region (TAR) is at an average elevation of about 14-15,000 feet above mean sea level. It is a cold desert devoid of major habitation and any industries. It is not a target rich area for air strikes. The road—rail network is for more extensive compared to the Indian side. Generally, Chinese military post look down at Indian post located at lower altitudes. The Indian side is marked by steep climb towards the border, and prone to frequent landslides. The logistics build up and/or troop’s relocation from one area to another is highly time consuming and seasonal due to climate compulsions.

The border is 4000km plus. Nepal and Bhutan situated as buffer states over nearly 1,500 km border results in problem of surveillance and detection should Chinese decide to invade from these areas as attack avenues. High altitude acclimatisation, a necessity for both sides, is easier for Chinese because the TAR itself is on high plateau. On Indian side post acclimatisation, troops are restricted to that area only. Movement to another area entails coming down, moving latterly and climbing up again. It is a cycle of acclimatise, de-acclimatise and again acclimatise. It is a slow process requiring weeks. This severely

restricts freedom to move troops quickly from one area to another. Napoleonic movements are out of question; which means that troops have to be deployed to defend every crucial point.

The sensitive targets on the Chinese side, destruction of which could cause pain, are located far from the border. The heartland of China, east and southeast China starts at an average distance of 1,000-1,500km from our airfields and the 2,500-3,000km stretch is far too large an area for the IAF to attack, with its present capabilities.

Conventional warfare requires 3:1 numerical superiority for the attacker in plains. Highly contested, obstacleridden plains require a ratio of around 5:1. In mountains this ratio shoots up to 10:1. If required, China can bring in 30 Divisions in TAR. They can relocate much faster at places of attack. If India decides to go on an offensive, imagine the forces required?

Appreciating the compulsion of topographical disadvantage, the then Eastern Army Commander in 1960, Lt Gen. Thorat had suggested his strategy. His pragmatic plan proposed purposeful escalation of war where in Chinese would advance down the mountains in to Assam plains. These plains would then be used as killing grounds by our forces after interdicting Chinese supply.

The border dispute can be used as an excuse to start a war as the strategic competition between China and India escalates in the future. Should this happen what are likely to be the war objectives?

China’s aim would be to put India in a secondary status. A military defeat along with economic and industrial disruption would be the obvious aim — large scale territorial occupation most unlikely. To make military defeat convincing, cutting off north-east India at Chumbi Valley-Siliguri corridor would be ideal. North-eastern India could be restored to India after imposing humiliating terms in Ladakh region.

India’s objective would be to defend its territory, and to defeat China’s aggression. Command of air would be sought by both sides fiercely to ensure freedom for ground forces movement. Both sides would avoid major escalation of war due to the nuclear backdrop.

But here Chinese nuclear superiority would tilt balance and flexibility in their side. If India was to adopt Mao’s strategy of Fifties, then she can avoid nuclear blackmail. In a speech at Moscow in 1957, Mao stated that China was willing to lose half its population to atomic attacks i.e. 300  million Chinese. It’s no great loss as China can again produce new citizens. But it will not succumb to Atomic Paper Tigers. In more recent times, starting from Deng Xiaoping himself and later by Lt Gen. Liu Yazhou, considered Douhet of China (according to a Review essay published in Air and Space Journal, USAF-Summer on 1 June 2010), PLAAF’S first task is to gain command of air fighting a local war under high-tech conditions.

According to one report, China had deployed 500,000 soldiers on the Tibetan Plateau by early Nineties. Half of them were based on Sino-Indian border. Four additional Chinese Armies, each 60,000- strong were based in neighbouring Sinkiang and Chengdu military district able to support operations against India by flanking attacks or providing follow on re-enforcements.

In the Nineties, it was estimated by another report that, PLA fielding 12-14 divisions in TAR, could go up to 20 divisions. Now the likely maximum could be around 30 divisions. If true, this is really a large force. It would be a daunting challenge for the Indian Army.

PLAAF is replacing its obsolete combat aircraft fleet and weaponry with current 4th generation fighters and modern weaponry. In Tibet area, its airfields lie within 300 to 1,000km from IAF bases. Most of the airfields are at high elevation between 3,500 to 4,300 metres above sea level.

There are a total of 14 airfields of concern. However, increasing air refueling capability in future will increase their numbers. PLAAF can deploy around 16 squadrons in these airfields. They would deploy the best units here, unless our diplomacy can ensure simultaneous threats to China at other fronts. Remember 1962 war — China used the window of Cuban missile crisis when superpowers were locked in an eye to eye confrontation.

Out of 1600 plus combat aircraft, around 400 aircraft are 4th generation. Its old bomber carrying long range cruise missile will be still effective. Ground-launched cruise missiles (GLCM) and TBMs will add to the strike power.

Thus it is evident that PLAAF will have modern aircraft for both air defence and long range strike and army support. It will have around nine AWACS/AEW&C, air-refuellers, surveillance and electronic warfare aircraft in support. Space imagery will present good intelligence on our target systems. The fighters will have modern air to air missiles including beyond visual range active missiles. Strike aircraft will have PGMs. H-6 will carry air launched cruise missile of 1,400km plus range. The high altitude of TAR will reduce bomb load to around one third that of sea level. But today’s PGMs have reduced the required bomb load for target destruction significantly. Air refuelling and high performance of Su-27, Su-30, and J-10 will offset altitude disadvantage to quite an extent. TBMs and GLCMs will not be affected much. Chinese airfields and other logistics related areas will have plethora of manual and automatic anti-aircraft artillery. In addition, there will be MANPADs, close and medium range SAMs. Radar cover will be extensive at medium and high altitude.

Timely intelligence input on Chinese build-up and its war intention will be crucial for Indian timely response. First India will need to ensure that Pakistan and Bangladesh front remain dormant. Use of diplomatic means, deterrence means etc will be required. This alone will permit India to maximise its army and air force for Chinese front. Army’s mobilisation would be critical if the need to defend at the border itself is a must. It is instructive to see an outsider’s view of our mobilisation. Edward Luce, in his book, In spite of Gods: The Strange Rise of Modern India, wrote with respect to our mobilisation consequent to the attack on our Parliament, “…watching India’s rusting military hardware chug past us reminded me of what I had read about the preparations for the First WW: mobilisation had followed the dictates of European railway timetables. Now India’s mobilisation, which was later dubbed ‘coercive diplomacy’ was occurring at the stately pace of the Indian Railways.”

IAF down to 30 combat Squadrons is stretched on two fronts. Catering for even bare minimum air defence on western borders, IAF will be barely able to match PLAAF. A matched IAF on the other hand with inherent faster mobilisation and deployment without the acclimatisation need, offers the best hope of concentrating offensive power at places of our choosing. In future the gap between IAF and PLA-AF will increase further unless urgent steps are initiated at once. IAFs SAMs are way too old. New ones are nowhere on the horizon in required numbers. Though we do have limited air refuelling capability and one or two AWACS, it is woefully inadequate.

Our airbases and army along with important areas will require sound air defence along the 4,000km plus border. Chinese could also ingress from the Myanmar, Nepal and Bhutan border. The Himalayas severely limit the detection by ground-based radars. This makes available warning time totally inadequate for reaction by aircraft-based on ground alert. Air borne air defence, 24-hours-a-day would require phenomenal resources. Nobody can afford it. This makes AWACS essential for survival.

During the 1991 Gulf War, MNF employed three AWACS simultaneously on a 1,000km front. To keep three AWACS always airborne they needed to do three trips each of 9-10 hours. To fly nine sorties each day MNF deployed 14 AWACS and three Nimrods. Thus to cater for our 4,000km front we would need 56 AWACS. This would also cover the border at Myanmar, Bhutan and Nepal. On the face of it, this may seem too costly, but proper analysis would show it not to be so. Because with AWACS giving us a warning period of about minimum 30 minutes we will be able to scramble fighters from ground alert. This would also drastically reduce the required numbers of air defence fighters, the pilots and other support staff and equipment. PLAAF will be denied air dominance. This is the only way for IAF to gain and maintain control of air. Control of the air is the fundamental requirement to defeat Chinese misadventure. In addition, the AWACS cover in TAR will provide immense safety to our strike aircraft from PLAAF fighters, keeping attrition within acceptable limit. If we do not keep attrition under control, then again, we would lose the war. Remember slaughter of air forces flying without AWACS cover in recent times.

For targets further inside, we need to employ our longer range surface to surface missiles (SSMs) and Tactical Ballistic Missiles (TBMs) in conventional mode. If we want to use strike aircraft for deeper targets, then we would need to provide air defence escorts, as Americans learnt during WW II after suffering 18-25 per cent attrition. They had to suspend the bombing campaign for six months till long range escorts were produced by American industry. In any case, in our scenario, worthwhile targets lie beyond 1,000 km. We need to concentrate on interdicting supplies at rear and support of army in battle area. These should be the target selection in a war of limited objectives.

Chinese aviation industry and PLAAF are modernising at an increasingly rapid rate. Their doctrine has acquired the offensive dynamism learning from the US experience. Their training, which was below par in the past is improving with help from Pakistan Air Force. Therefore, there is little time for us to lose.