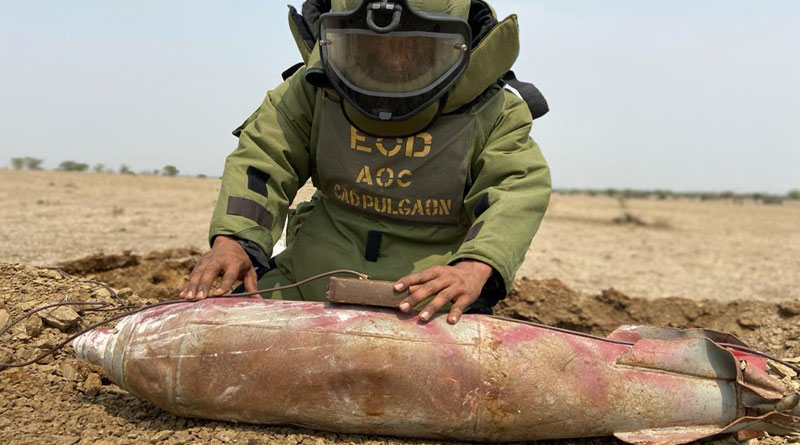 Southern Command at Pune undertook operation “Visphotak Mukt Bandargah” under the aegis of “Aid to civil authorities”, to ensure a safe and secure environment in civil society.

The operation involved disposal of 1600 metric tonnes of unexploded ordnance that had possibly been collected inadvertently by some factories and steel scrap yards over the past few years at multiple locations in Mumbai, Gujarat, Kanpur, Jaipur and Jodhpur. The Indian Army launched the Operation on directions of Ministry of Defence is to ensure a safe environment for all citizens settled in and around the identified locations.

A special Bomb Disposal Team from Central Ammunition Depot, Pulgaon was deputed by the Army and dispatched to multiple locations for survey, segregation and disposal of unexploded ordnance. The explosives were carried by the Army special team to safe locations outside the respective city limits and disposed off safely in a phased manner. In Mumbai alone, over 8 lakh kgs of Unidentified Explosive Object (UXO) with a total explosive content of over two thousand Kgs of RDX/ TNT was disposed by the bomb disposal team in the recent past.

A press statement from the Army stated, “The operation is yet another example of excellent joint coordination and cooperation that exists between civil administration and the Army in the Southern  Command. A similar operation was conducted in March 2021 by Southern Command at Thiruvallur district of Tamil Nadu where unexploded ordnance was safely disposed thus ensuring a safe environment for all citizens in and around Gummidepoondi, 43 Kms from Chennai.”

It further added, “Indian Army is committed towards security and safety of the Citizens. Explosive experts of the Army, despite the challenges and dangers in such situations, execute these tasks with motivation and determination. During the disposal at both Mumbai and Thiruvallur, the primary focus was given to safety of people and their property while destroying these objects.”