‘Through L&T MBDA Missile Systems Ltd we are offering several key capabilities under the Make in India initiative, including products such as ATGM5’ 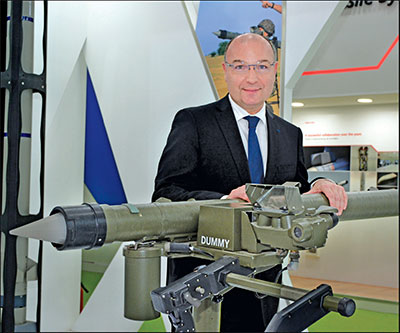 Which MBDA weapon systems are being incorporated for IAF’s Rafale?

India’s Rafale will be equipped with MICA, a missile the Indian Air Force (IAF) knows very well as it is also part of the upgrade package for the IAF’s Mirage 2000 aircraft. MICA is the only missile in the world featuring two interoperable seekers (active radar and imaging infrared) to cover the spectrum from close-in dogfight to long beyond visual range. Its ability to fly out to BVR in passive mode before the seeker locks on in the final stages of the end-game has earned it the nickname ‘silent killer’ as the target has little time to react or to deploy effective countermeasures.

Also, fitted to Rafale is the Meteor beyond visual range air-to-air missile, which is widely recognised as a game changer for air combat. Key to this is Meteor’s throttleable ramjet engine, active radar seeker and datalink that combine to provide unmatched end-game speed and manoeuvrability at greatly extended ranges, resulting in its all-important ‘No-Escape Zone’ being several times greater than any other existing or planned BVR weapons. With these two systems, the IAF will have unrivalled dominance of its regional skies. Rafale can also be equipped with the SCALP deep-strike cruise missile, providing the aircraft with the ability to strike hardened and protected targets deep inside hostile territory.

What is MBDA’s role in the Mirage 2000 upgradation programme?

Our MICA missile is an integral part of the IAF’s Mirage 2000 upgrade programme and will significantly enhance the air-to-air combat of the aircraft. MICA is the only missile in the world featuring two interoperable seekers (active radar and imaging infrared) to cover the spectrum from close-in dogfight to long beyond visual range. Its ability to fly out to BVR in passive mode before the seeker locks on in the final stages of the end game has earned it the nickname ‘silent killer’ as the target has little time to react or to deploy effective countermeasures.

Are there any other ongoing programmes with the IAF?

ASRAAM is a key part of the IAF’s Jaguar upgrade programme and is providing Jaguar fleet with a step-change in air combat performance as part of the New Generation Close Combat Missile programme. ASRAAM has a larger and more powerful rocket motor than other missiles in its class offering pilots with a key ‘first shot first kill’ capability to take the uncertainty out of a potential dogfight.


In addition, Mistral has already been selected and integrated into the ATAM helicopter launch system for Indian helicopters (namely ALH and LCH). We are also offering our Brimstone missile as an option to enhance the strike capabilities of Indian aircraft. Where many have a system on one IAF platform, our focus now is to expand our presence onto multiple Indian platforms so that the Indian armed forces can take advantage of the operational, support and training benefits of utilising common weapon stockpiles across multiple platforms.

What is the status of Brimstone missiles being offered to the IAF?

Brimstone would provide a major enhancement to the strike capabilities of the Indian armed forces. Brimstone is a truly unique high-precision strike weapon that is suitable for use both as an anti-armour weapon in high-intensity conflicts and for operations against challenging targets in collaterally constrained environments. It has a highly advanced dual mode guidance system (semi-active laser/millimetric wave radar) that allows it to engage fast moving, manoeuvring targets in all weather conditions, either autonomously or with operator in the loop control. Brimstone is the only air-to-ground missile that has been proven for use from fast jets, helicopters, unmanned aerial vehicles, land and sea. Brimstone has been extensively combat proven over 15 years of non-stop combat operations with the Royal Air Force – where it has repeatedly demonstrated its unique capabilities with unerring precision and reliability. Being only 50kg multiple Brimstones can be carried by a single platform, providing the ability to engage large numbers of targets simultaneously.

Currently, there is a lot of focus on indigenised production of defence equipment. How do you plan to align yourself in this environment?

MBDA has been delivering battle-winning capabilities to the Indian armed forces and co-operating with Indian industry for over 50 years, and throughout this our strategy has been one of true partnership. The indigenous production of our MILAN anti-tank missile in India is a great example of this, and the missile continues to provide vital operational capability to the Indian Army. So it’s clear we have an excellent track record in terms of providing both operational and industrial capabilities, and given the strength of these two pillars we feel we are very well placed to continue our partnership with India for the future. Our joint venture with Larsen and Toubro (L&T) is an evidence of our confidence and desire to continue to deepen our partnership with Indian industry and the Indian armed forces. Through L&T MBDA Missile Systems Ltd we are offering several key capabilities under the ‘Make in India’ initiative, including products such as ATGM5 — which has the world’s only fifth generation anti-tank missile technologies — as an ‘Indian Designed, Developed and Manufactured (IDDM)’ category project.

Apart from L&T, is MBDA looking at other Indian firms for co-development/co-production partnerships?

We are in on-going dialogue with many Indian enterprises over partnerships on missile technologies that would support the ‘Make in India’ programme. We have set up an extensive network of business partners throughout India, and this network is increasing year on year. This extensive Indian supply chain will be able to support our JV initiatives and we are ready to fulfil ‘Make in India’ requirements through this JV with L&T. In addition, we will continue to work with Indian public sector entities for local production, development and partnership.

Are there any ongoing naval programmes?

Yes, we are currently engaged in two main naval programmes through L&T MBDA Missile Systems Ltd: Exocet MM40 Block 3 for the Indian Navy’s Medium Range Anti-Ship Missile (MRAShM) requirement; and Sea Ceptor for the Indian Navy’s Short-Range Surface to Air Missile (SRSAM) requirement. MBDA also has a full spectrum of missile systems to meet all the arming requirements of naval helicopters. For long-range requirements MBDA’s famous and combat proven Exocet AM 39 missile is available, Marte ER provides excellent extended medium range capability, while Sea Venom/ ANL provides unrivalled fire-and-forget or operator above the loop ability to engage multiple targets at short to medium ranges in open waters or even challenging littoral environments. In addition, there are several aircraft armaments already in the IAF service that are suitable for the Indian Navy’s combat aircraft, both present and future.

Any updates on the Maitri programme?

We understand that the IAF and army will fulfil their SRSAM requirement with Akash, while the navy will fulfil its SRSAM requirement through an international competition, in which we will offer our Sea Ceptor system. Of course, we would also be happy to update our original SRSAM offer if requested by the Indian ministry of defence (MoD) or Defence Research and Development Organisation (DRDO).