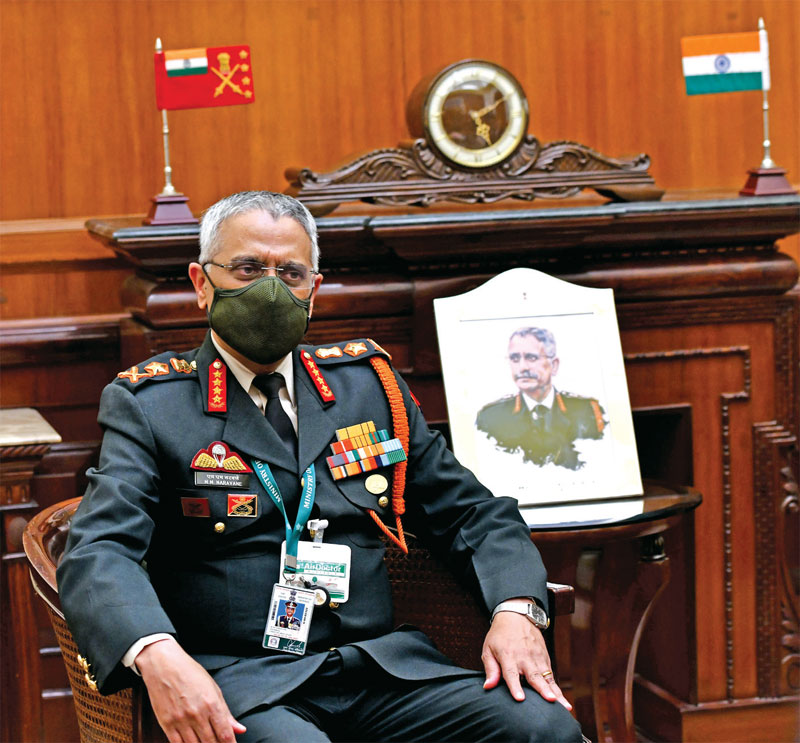 In what way has the present crisis affected/ influenced army’s training programmes?

The Covid-19 pandemic threw up many challenges in the conduct of training, presenting at the same time new opportunities in emerging areas and in the virtual domain. Post March 2020, due to nationwide lockdown and impact of Covid-19, training did face challenges. However, proactive actions were initiated to minimise the risk and training was suitably restructured to insulate essential training activities from the pandemic. In doing so, it was ensured that training standards and tests were not diluted, and all mandatory activities continued with suitable precautions.

The challenge presented by the pandemic has been turned into opportunity by the army with an expanded utilisation of digital means and platforms, enhancing connectivity through secure video-conferencing facilities across military stations, and conduct of courses in online mode.

In field formations, selected training activities were shifted to e-platforms and operational discussions and sand model exercises were conducted on secure Data Network. Field firing at various ranges was calibrated and priority of units drawn up to avoid overcrowding at the ranges while maintaining optimal training standards.

Overall, the response to Covid-19 has been calibrated to reduce contact training while maintaining essential standards and shifting bulk of training online. With the commencement of the vaccination programme, the success and control over the spread of the pandemic would continue to dictate the response strategy of the Indian Army.

What are the procurements in the pipeline for improvement in habitat, communications and weapon systems under fast-track procedure?

Modernisation and operational preparedness plans of the Indian Army are dynamic and based on a realistic analysis of capability voids, vis-a-vis envisaged threats. The Indian Army has taken several initiatives in the recent past to enhance the capability of its forces deployed along the northern borders under FTP.


We are also in the process of empowering our Special Forces and Intelligence units with modern, robust and latest state of the art communications as well as intelligence sharing systems respectively. The latest generation engineering plant and earth moving equipment would contribute substantially in upgrading our communications and habitat in difficult terrain while fast patrol boats are expected to be a big force multiplier for our quick reaction teams’ mobility in water bodies. These initiatives along with our other procurements will greatly enhance the effectiveness of our forces to deal with any situation that may arise in the future.

What is the update on the procurement of Apache helicopters? Will army seek more numbers?

The contract for procurement of Apache AH-64E helicopters has been signed on 25 February 2020 and implementation is going on smoothly. As part of the contract, our aviators and technicians would be undergoing training on the equipment from this year onwards. The army is planning to procure a few more attack helicopters; however, it is too early to give out details at present.

What organisational and structural changes have been brought about at the Army HQ and RR HQ under the new military reforms?

Towards this end, the operational, intelligence, operational logistics, strategic planning and information warfare directorates have been placed under a newly created appointment of Deputy Chief of Army Staff (Strategy) who will function as a Principal Staff Officer (PSO). Establishment of this new vertical would result in optimising efficiency in operational decision-making and execution. Directorate General of Information Warfare has been created under DCOAS (Strategy) to provide impetus to offensive and defensive information operations.

Capital and revenue expenditure process have now been placed under a single PSO (Deputy Chief of Army Staff [Capability Development and Sustenance]) by re-aligning the existing vertical of Deputy Chief of Army Staff (Planning and Systems) and Master General of Ordnance (MGO). This enables synergy, integration and inter-se prioritization of both capability development and sustenance and better resource allocation.

Directorate General of Military Training at IHQ of MoD (Army) has been merged with HQ ARTRAC to enable single point interface on institutionalized training.

Two new directorates have been created to focus on important issues of Human Rights and Vigilance to enhance probity and accountability across the organisation in consonance with the ethos of the army as also sensitivity of the subject.

Directorate General of Rashtriya Rifles has been placed under HQ Northern Command and re-located to Udhampur to ensure closer interaction of the Directorate with troops.

Which recommendations of the Disruptive Technology Study Group headed by the Army Commander, Army Training Command, have been accepted by the Army HQs?

Rapid emergence of niche and potentially disruptive technologies necessitates Indian Army to prepare itself for the future battlefields which will be characterised by quantum jump in employment of cutting-edge weapons/ platforms. Towards this, there was a need felt for realistic assessment of critical and game changing technologies, currently held/ likely to be possessed by our adversaries for future military applications.

We had convened a study team under GOC-in-C, ARTRAC to assess the existing and future niche/ disruptive military technologies, their impact on warfighting and recommend a technology development roadmap along with necessary changes in warfighting doctrines.

The study team has also analysed our strategic relations with other developed nations with respect to the desired technologies and interacted with civil technology subject matter experts for their advice.

Based on the recommendations of the study team, we have identified niche technologies like Al, 5G, military loT, robotics, quantum, UAVs/ counter-UAVs, hypersonics and adaptive printing as our key focus areas.

Number of steps in the field of drones, swarming, quantum computing and Al have already been initiated. Additionally, the qualitative requirements of all the systems planned for induction will have Al applications duly incorporated. A definitive and pragmatic roadmap has been prepared by the study team and the same is being analysed for further on ground implementation.