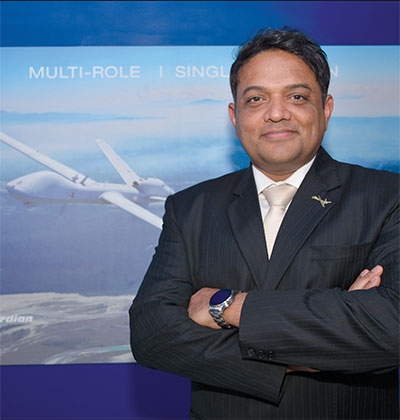 How did Aero India 2019 go for you? What kind of visitors you received and what was their area of interest?

Aero India 2019 was a great opportunity for General Atomics (GA) to showcase our extensive Unmanned Aerial Systems (UAS) lineage and the Electromagnetic Systems (EMS) Group which includes products such as the Electromagnetic Aircraft Launch System (EMALS) and Advanced Aircraft Arresting Gear (AAG). GA is upbeat about the varied opportunities provided by our interactions with the government of India and industry partners. GA is thankful for the deep insights gained from our experience at Aero India 2019 and we look forward to a successful year.

Do you have a sense of a timeline now for the Indian Navy’s acquisition of SeaGuardian?

We are pleased with how discussions between the Indian Navy and US government have gone to date and hope an acquisition decision will be made shortly.

What distinguishes the SeaGuardian from SkyGuardian? Is SeaGuardian capable of operating from naval platforms?

The SeaGuardian and SkyGuardian belong to the same MQ-9B family.   What sets the SkyGuardian and SeaGuardian apart from other aircraft is first, the aircraft is highly modular and is easily configured with a variety of payloads to meet mission requirements. Second, they can carry multiple mission payloads across nine hard points and includes a state-of-the-art Detect and Avoid (DAA) system for operations in national and non-segregated airspace. The SeaGuardian configuration, with its maritime patrol radar, provides unmatched ability to support open-ocean and littoral surface surveillance for border patrol, coast guard, and disaster relief missions.

The SeaGuardian is a land-based UAS that works in conjunction with naval platforms.

Is weaponisation of Sea Guardian possible?

While your programme with the Indian armed forces will be in the realm of government to government contract, do you see a possibility of technology-sharing or hand-holding of the Defence Research and Development Organisation (DRDO) in their work in unmanned systems?

We look forward to collaborating with a range of industry partners, including DRDO.

Has the DRDO approached you?

GA is not aware of any formal request from DRDO.

With SkyGuardian, it is frequently mentioned that it is ‘developed to operate in civil airspace’. What is the significance of this?

MQ-9B is built as a certifiable (STANAG 4671-compliant) version of the MQ-9 Predator B product line. Its development is the result of a five-year, company-funded effort to deliver a Remotely Piloted Aircraft (RPA) that can meet the stringent airworthiness and type-certification requirements of various military and civil authorities, including the UK Military Airworthiness Authority (MAA) and the US FAA. Type-certification, together with an extensively tested collision avoidance system, will allow unrestricted operations in all classes of national and non-segregated airspace.

A certified Remotely Piloted Aircraft System (RPAS) allows new customers and existing customers to employ MQ-9B (SkyGuardian and SeaGuardian) in new ways that will greatly expand the operational capability of the platforms. The benefits of a certified RPA are the ability to seamlessly operate in non-segregated airspace like a manned commercial or military aircraft.