‘Not Less Than 140 of 200 Helicopters Shall Be Produced at The Facilities of the Joint Venture in India, Thereby Supporting the Make in India Initiative’ 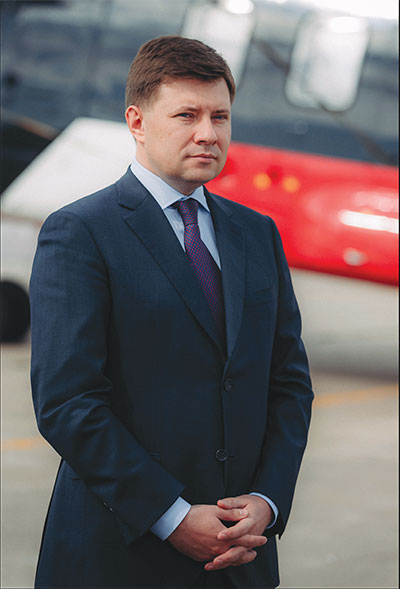 What is the status of the joint-venture between Russian Helicopters and Hindustan Aeronautics Ltd?

The agreement between the Russian Federation and India on the cooperation in the helicopter industry was signed in 2015. In accordance with the document, Russian Helicopters together with JSC Rosoboronexport organised the supply of Ka-226T helicopters to India, and also to work towards localisation of production in the country. Not less than 140 of 200 helicopters shall be produced at the facilities of the joint venture in India, thereby supporting the Make in India initiative. The joint venture, registered in May 2017, will perform final assembly and repair of helicopters, as well as act as an integrator of the Indian supplier chain.

What are your future plans in India?

The supply of 200 Ka-226T helicopters with localisation of their manufacture is certainly the main project which we implement in cooperation with Rosoboronexport and the Indian corporation HAL. The work in this area is in full swing. The first fuselages are already being assembled at the Ulan-Ude Aviation Plant, and serial production is to start in 2020. In general, we also have great hopes regarding the civilian segment in terms of supplies. We currently have a contract for supplying Mi-171A2 helicopters to India with an option for another machine. We are completing the certification of this machine in cooperation with Indian aviation authorities. As part of the demonstration tour in Southeast Asia, agreements on promoting the light Ansat helicopter on the Indian market were reached.

Could you please tell us a bit about the Kamov-226T light utility helicopter?

Light utility Ka-226T helicopter features coaxial main rotor system, maximum take-off weight of 3.6 tons and is capable of transporting up to one ton of payload. It can be equipped with transport cabin, which allows transporting up to six people, or modules fitted with special equipment. Improved flight performance of Ka-226T helicopter, environmental friendliness, cost-effectiveness, state-of-the-art avionics suite and additional flight safety solutions make this helicopter one of the best in its class.


As distinct from the ‘land-based’ version, light utility ship-based Ka-226T helicopter features a blade folding system of the main rotor. Moreover, the helicopter boasts of the state-of-the-art avionics suite. Its components and systems are fit for operation under aggressive conditions of marine environment. Owing to its small dimensions, the helicopter can be deployed on ships and low-displacement vessels. Ship-based Ka-226T helicopter is intended for performing search and rescue and transport missions round-the-clock in standard or adverse weather.

What international programmes are you participating in right now?

At the end of 2018, we held a large-scale presentation of Russian helicopters to foreign customers from Southeast Asia for the first time in our history. During the month, as part of a demonstration tour of the countries in the region, Ansat and Mi-171A2 flew about five thousand kilometres and made demonstration flights in China, Vietnam, Thailand, Cambodia and Malaysia.

Good performance of Russian helicopters and favourable after-sales service conditions enabled us to get about 70 applications for supply. Asia is one of our key markets because in the next few years it will generate steady demand for helicopters. The holding company estimates that operators from Southeast Asia alone will need at least 500 helicopters by 2025, so we will seek to ensure that contracts provide for the interest demonstrated by potential customers from Thailand, Vietnam, Cambodia and Malaysia.

This year we supply helicopters that had previously never been sold abroad to foreign customers for the first time, and we expect that the experience of their operation by our customers will attract new buyers. First, these are two Mi-171A2 machines which will be handed over to an Indian company and a customer from Kazakhstan. Serial production of this type of helicopters was launched last year, so the machine is completely new. Second, this is Ansat with a medical module. We agreed to provide the Chinese Association of Emergency Medicine with 20 Ansats, and we plan to hand over the first rotorcraft to them in 2019.

Please tell us in detail about the Mi-17 multirole helicopters.

India is currently operating more than 280 Mi-8/17 helicopters, mostly for military purposes. To date, the Mi-17B-5 is the backbone of India’s air force transport fleet and has been used repeatedly for the most complex operations, including humanitarian aid and disaster relief. Also, given its absolute ceiling of 6,000m, this helicopter can be used for making regular supplies to the Indian Army units stationed on the Siachen glacier in the Himalayas.

As regards civil operators, we are offering them the Mi-171A2. It is a combination of more than half a century of expertise in Mi-8/17 development and the cutting-edge technical solutions. We have already signed the virgin contract for the supply of this helicopter to India, with an option for another one. Work is under way with the Indian aviation authorities to have the Mi-171A2 certified in India. It meets all present-day requirements for reliability, safety and comfort. By its technical parameters and capabilities the Mi-171A2 is greatly different from its predecessors. Its key features are the new frame and the more economical and powerful engines that ensure a 10 per cent increase in cruising and maximum speeds, in addition to a 25 per cent increase in load capacity. The passenger version of the Mi-171A2 can seat up to 24 people. It can be used effectively 24/7, in highland conditions, at low and high temperatures, in high humidity and above water.