A day in the life of ITBP troops and animal transport 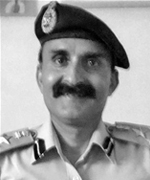 Her cry was bloodcurdling. The agony filled pleading was so loud that it could be heard over the roaring Kali Ganga river hundreds of feet below. She wanted the pain to end. We could only hear her cry; but could not see her. Our hearts were in our throat. The term ‘learned helplessness’ aptly encapsulated this situation.

I was with an ITBP logistic convoy carrying ammunition, mortar shells, sugar, rum and condiments for the troops in one of the toughest borders in the world — A terrain that tests the character of soldiers; a terrain that distinguishes boys from men. This was not a tourist trek. We used to negotiate these slippery high altitude boulders daily. It was our job. We had signed up for this. We were proud of the fact that we were the lifeline for troops guarding these oxygen deficient borders.

We had just crossed Gala, Zipti and were on our way to Buddhi. Contrary to popular perception, climbing down inclines is more difficult than climbing up. If you want to test this theory, you are invited to the ‘Zipti ki utrai’ also called the hell slope. It is guaranteed that your knee caps would shiver after you take a few steps over steeply sloping haphazard boulders, with the entire weight of your body on your knees. It is here that the synovial lubrication of your cartilages would be tested. Even the toughest of men have shaking knees after a few kilometres on the hell slope.

We were 17 men with 14 ponies. We had started at 0400hrs from Mangti Nala. The ponies were loaded with 40 kg each, much lower than the authorised payload, due to inclement weather, risky route and steep undulating terrain. The ponies were effortlessly marching along the narrow track, carved on the mountain face, just enough to place one hoof. One on side was the mountain face and on the other side was a drop into a bottomless gorge, with the river gushing along its serpentine course. These were sure-footed Kumaoni ponies. We crossed a place called Ghatia Bhagad, aptly named ‘ghatia’ because it is really the worse of the worst. Ankle deep slush and no place for the ponies to rest. Then we reached Gala. Had an early breakfast. The ponies had high nutrition rations. The morale of our ponies and men were high. They were looking forward to having lunch at the small staging camp at Budhi, to once again climb up the ‘Budhi ki chadai’ to reach Chiyallik and then the Company HQ at Gharbyang, then onward the next day to Gunji and then to Kalapani.

The standard operating procedure for the convoy drill was being followed to the letter. The sub-inspector, animal transport (AT) was at the head of the convoy, followed by the most experienced pony named Anjana who was a veteran of these borders. Anjana set the pace for all other ponies. She knew that she had to carry along the younger ponies, so that they don’t get exhausted. She was the leader of the pack. Each pony had a handler who held the head collar rein and walked a step ahead or alongside or behind, as per the terrain. The Head Constable (AT) was in the middle of the convoy, and I was walking at the tail of this group. At my position I was happy to see the spring in the steps of the men and the ponies snorting away and taking each step carefully on this narrow track. There were overhanging rocks therefore we had ensured a compact load, without a ‘top load’ on the loading saddles, to prevent any accident.

But as they say, all well-laid plans in the mountains are brought to a nought by the mountain itself. The mountain willed differently. Today, it wanted blood. As the convoy was moving along, the incessant rains had loosened some mud on the mountain slope. I saw shooting stones, the size of 9mm bullets flying past my head. Yes, these small shooting stones are as deadly as bullets. They gain momentum as they roll along the mountain face, and it whizzes past at nearly the muzzle velocity for a 5.56 INSAS. It is a gamble. If they miss, they miss. But if they hit any part of the body, it is like a bullet injury. And if by chance it hits the head, that’s an instant painless death.

And out of nowhere, a rock, the size of a football, hit the lead pony Anjana on the flank. She lost her balance. The rock didn’t do much damage, as the Pack & Draft (P&D) had thick leather side panels and that took much of the impact. But since the track was very narrow, she was pushed to the very edge of the track. We saw it in slow motion. First the right hind hoof lost the traction on the ground. Then it was followed by the right foreleg. Anjana was hanging on the mountain ledge with her left hind and forelegs. The mud gave way. The grating sound of hoofs on pebbles was an attempt to regain her balance. Constable (AT) Vikas was holding her reins. He pulled with all his might. The distance between him and the next man was 10 feet. The man behind him rushed to his rescue, and tried to pull Anjana up. But can 60kg men hold on to a 400 kg pony with mere leather straps? But they held on. All this happened in milliseconds. At personal risk, they held on. Then the unexpected happened. The leather in the head collar snapped. No leather in the world is made to withstand a tug of war between man and horse on a mountain face in incessant rain. The snap was loud. Like a whiplash. Vikas shouted,’Anjaaaanaaaaaa!’


That’s all we saw. The pony just disappeared into the gorge. The bottom of the gorge was covered with fog. Nothing was visible. We knew the gorge was deep. But it seemed bottomless due to the fog. After a few seconds that seemed to us like eons, we heard a dull thud. Like a sack of rice falling down on the floor.

The inevitable had happened.

Even in this crisis, logical thinking does not cease. We prayed for instant death. A kind death for Anjana, our darling pony. Our buddy.

But the mountain wanted more.

A heart wrenching cry of pain travelled at the speed of sound from the gorge below.

Shall we call a rescue party from the post 13 km away on foot? No time. Shall we allow her to die her own death, in her own time? No, never. We could not abandon her.

Quickly Head Constable (GD) Tashi Tsering unwound the rope from all the 13 loading saddles and joined them together in a mountaineer’s knot. Tashi was our mountaineering expert who had participated in many ITBP virgin peak expeditions. All the men helped Tashi to anchor the rope on a rock. There were two big rocks. Which one should we trust to hold the weight of a man? Here I thank my school geography teachers. One was a sedimentary rock and the other was an igneous rock. The sedimentary rock looked larger, but its base was not broad enough. Also it could crumble. But the igneous rock, made thousands of years ago due to solidification of molten lava/ magma looked solid. This rock was selected as an anchor. And within no time Tashi was on his way to the bottom of the gorge with the men belaying the rope. He went past the foggy bottom. Then we head his shout, “First Aid team ki zaroorat hai.” (We need the first-aid team).

I was a youngster. There was no Head Constable (vet) in the convoy. So I took the MVFA kit and emptied it into the rug-sack of Constable (AT) Vikas. I ensured that I had powerful painkillers, intravenous fluids, an IV set and four vials of Xylaxine and two vials of Thiopentone sodium, to perform the inevitable. I was hoping against hope that Anjana would be spared with a few bruises.

With a deep breath, I descended. Slowly, but surely, the basic mountaineering training at the ITBP Academy came back to me. “Never lose your two point foothold during rope decent”, the voice of Chotu Ustaad rang in my mind. I used to think, why the hell are they teaching me rock climbing at the Academy? I got my answer as I was rappelling down to the bottom of the gorge.

My arms were feeling the strain. Then I broke through the fog cover, and on looking down saw Tsering first. He was squatting beside the prone pony. I also saw something strange. Fifteen feet away from the pony was a huge handsome monkey with a red face, fringed with beautiful white hair. He was sitting on a rock and staring intently at me.

I approached Anjana with trepidation. Her neck was at an odd angle. The second cervical vertebrae was popping out of the skin, and the anatomical continuity was abnormal. Both hind legs had compound fractures. The thoracic area was punctured. One of the ribs had invaginate and had pierced the lungs. Air was bubbling out of the wound.

One part of my mind was exploring options to lift her up and put her in multiple plaster cast. But the logical part of my mind knew that this was a pipe dream. Anjana was beyond any cure. Beyond human intervention. I passed an intravenous needle into her jugular vein and started an IV drip. As a first instinct I infused powerful painkiller, Flunixin Meglumine into the IV bottle and automatically reached for the antibiotics. Then I stopped. Antibiotics were not required. Release from the suffering was more important.

I mixed all for vials of anaesthetics into the bottle, and increased the infusion rate. Slowly Anjana’s moaning decreased. I looked deeply into her eyes. They were calm, peaceful and seemed as if they were happy. She progressed from Stage II anaesthesia to Stage III. She went into a deep slumber. Never to wake up. Finally she was in a land where the green grass grows, the sun shines brightly and multi-coloured butterflies tickle her ears.

All this time the handsome monkey was watching me. This is strange. There are no large monkeys in this remote high altitude terrain. How had he come here? Then I saw his eyes — huge and bright with an orange tinge. Suddenly it clicked. He reminded me of my superhero. Before Batman, Superman, it was always Hanuman for me, as a child. Anjana was the mother of Hanuman. As soon as the pony got a release from this mortal life, the majestic monkey also climbed up the mountains never to be seen again.

Every word of this incident is the truth and nothing but the truth. There is absolutely no dramatisation.

The logistic convoy reached Budhi. The remaining 13 ponies bedded in for the night and slept soundly. All of us didn’t have our dinner but had one extra peg of rum that night to drown our pain.