The importance of preventing history from becoming a propagandist’s tool

He promised evidence. He served up belief. He started with an argument. He ended up with a rant.

Confession No. 1: I have not read any other book by Varma, so I cannot comment on his erudition. His brief profile on the jacket lists four other books written by him. Since The Great Hindu Civilisation was written during the Pandemic, perhaps, Varma couldn’t devote the kind of attention to research and reflection as he would have done otherwise.

Varma opened with a promise, ‘It shall be my attempt to show, through evidence and reason, that there was, once upon a time, a great Hindu civilisation.’ Warming up to this, I sat down with the book accompanied by a marker pen and a sticky pad. However, the next few pages comprised only complaints against historians such as Romilla Thapar, Irfan Habib, Sanjay Subrahmanyam and Wendy Doniger, and writers like Jawaharlal Nehru, Amartya Sen and Sunil Khilnani and so on for deliberately ignoring, broad-brushing or downright negating not just the greatness of the Hindu civilisation, but its very existence too.

Varma writes that either they were too driven by the idea of building a secular India and wrongly believed that any allusion to the ‘great Hindu civilisation’ would likely encourage a sectarian sentiment or were too overwhelmed by the colonial narrative. Worse, some of them were intellectually too lazy to peruse ‘the mass of textual, historical and archaeological evidence available’ to support the idea ‘of an ancient Indian civilisation.’ Yes, occasionally he refers to Hindu civilisation as Indian civilisation. Yet, despite the mass of evidence apparently available to support that idea, he does not offer any.

Opinions are always subjective, so one cannot criticise Varma for his opinion on historians and writers despite their professional credentials. However, his near sexist and almost condescending description of historian Dr Upinder Singh is appalling. While referring to her book A History of Ancient India and Medieval India: From the Stone Age to the 12th Century, he writes: ‘It is important to remember that Dr Singh is no ultra-right demagogue. She is a professional historian of impeccable credentials, and the daughter of Dr Manmohan Singh, the former prime minister of India who belongs to the Congress party.’

If indeed Dr Singh has impeccable credentials as a historian, why does she need this additional qualification of not being ‘ultra-right’ and Congress Prime Minister’s daughter? After all Varma does not employ these introductory notes for others who he quotes throughout the book, including people with questionable credentials, like Sita Ram Goel, Koenraad Elst, Rajiv Malhotra, Michel Danino and so on. He doesn’t identify them by their political leanings or the fact that some of them have been questioned by their peers for their less than honest writings.

Even more interestingly, while Varma trusts Danino’s narration (The Lost River) on the existence and the trajectory of river Sarasvati, going to the extent of establishing its antiquity, he dismisses the contrarian view offered by Tony Joseph in his book Early Indians, as ‘Scholars are entitled to their opinions;… Yet, it is my view that the manner and frequency with which the Saravati is lauded in the Rig Veda (and other texts) could not only be a flight of imagination.’

Confession No. 2: Once Varma started giving precedence to ‘view’ and ‘belief’ over ‘evidence’, I started referring more and more to his footnotes, which led me to the discovery that the real story is not in the book but in the references. Who he is quoting and who he choosing to omit.

Having established the existence, antiquity and the reasons why we don’t remember the Hindu civilisation, Varma moves on the explain why it outlived all other ancient civilisations and continues to survive even in the present times. He quotes Mahatma Gandhi, ‘I believe that the civilisation India has evolved is not to be beaten in the world. Nothing can equal the seed sown by our ancestors. Rome went, Greece shared the same fate, the might of the Pharaohs was broken, Japan has been westernised, of China nothing can be said, but India is still, somehow or the other, sound at the foundation.’

Clearly, our ignorance about China is not a new phenomenon but a historic predilection. In China’s exalted view of self, it has been the middle kingdom since antiquity with satellite nations all around it which paid tributes to the Chinese emperor, chosen to be on the throne by God. Chinese believe that despite ups and downs in its history, its greatness survives as an unending continuum. Clearly, self-belief is not enough.

Coming back to the book, according to Varma, Gandhi wrote this in 1909 in his first book Hind Swaraj. Incidentally, Mohammed Iqbal’s 1904 poem Tarana-e-Hind (song of India) had a somewhat similar verse:

Kuch baat hai kih hasti mitti nahiṉ hamari/ Sadiyoṉ raha hai dus̱ẖman daur-e-zaman hamara (There is something that prevents us from extinction, though the world tried to do so for centuries)

Yet Varma only recalls Iqbal for propounding the two-nation theory in 1930. And once again misses the chronology. The idea of a separate nation for Hindus and Muslims was first enunciated in 1924 by Lala Lajpat Rai through a series of 13 articles published in The Tribune. In the 11th article, Rai wrote:

‘Under my scheme the Muslims will have four Muslim States: (1) The Pathan Province or the North-West Frontier; (2) Western Punjab (3) Sindh and (4) Eastern Bengal. If there are compact Muslim communities in any other part of India, sufficiently large to form a province, they should be similarly constituted. But it should be distinctly understood that this is not a united India. It means a clear partition of India into a Muslim India and a non-Muslim India.’

This was six years before Iqbal voiced this idea, which incidentally has been contested by historian Tara Chand in his book, History of the Freedom Movement in India, Volume Three (1983). Chand wrote that there was no mention of two independent nations in Iqbal’s speech. What he said was ‘amalgamating Panjab, North-west Frontier Province, Sind and Baluchistan in one autonomous region…’ Despite this, the Muslim League finally adopted the Pakistan Resolution in Lahore only on 23 March 1940, 16 years after Rai floated the idea.

It is surprising that a person of Varma’s stature and station would not know something so well known. Omitting them deliberately suggests an agenda; not knowing about this historical fact reflects poor research. I am inclined to go with the former explanation, because despite the title of the book, nearly half of it is about how Muslims and to lesser extent, the British, harmed the great Hindu civilisation. The chapter on The Islamic Conquest opens thus:

‘…the Hindu civilisation had never seen conquerors like the Islamic Turkic invaders, who were so blindly committed to the destruction of a culture, so fanatically driven by a belief in the superiority of their religion, so unrelenting in their hatred for those not belonging to it and so passionate about the need to convert the unbelievers.’

Thereafter, Varma unveils his quiver of arrows, each representing different strains of the Hindutva propaganda. Predictably, he starts with Somnath and unsurprisingly, steers clear of Romilla Thapar’s Somanatha: The Many Voices of History. The next few pages are full of words and phrases like ‘kafir’, ‘dar ul harb’, ‘temple destruction’, ‘forced conversions’, ‘jiziya’ and so on. Without getting into the details of each of these allegations, I would like to point out the inherent contradiction in the Hindutva propaganda. The non-Muslim (kafir, if you insist though the word means disbeliever and not believer of another faith) tax jiziya was one of the main sources of state revenue. Why would any ruler want to forcefully convert non-Muslims and cut off his source of revenue?

As far as temple destruction is concerned, it is a laborious subject and addressed in great detail by Richard M Eaton in several of his publications, including the 2019 book India in the Persianate Age: 1000-1765. Varma dismisses Eaton. His contention is, ‘Are Indians incapable on their own of examining the evidence on record of what transpired during this period?’ The Indian whose evidence he relies on is Sita Ram Goel, a non-historian and self-avowed crusader of the Hindutva project, who had to go in hiding several times to avoid arrest due to his incendiary writings. 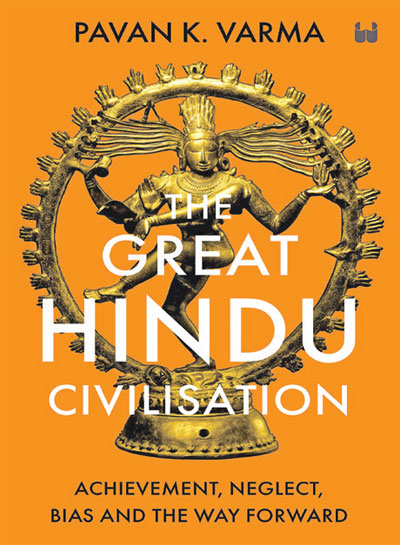 Conscious of the limitations of this argument, Varma finally takes recourse in V.S. Naipaul. Quoting him, he writes, ‘The Muslim view of their conquest of India is a truer one. They speak of the triumph of the faith, the destruction of the idols and the temples, the loot, the carting away of the local people as slaves… There are no Hindu records of this period. Defeated people never write their history.’

But this is not the reason why Varma’s exertion cannot be taken seriously. In the same chapter he writes, ‘But the Sufi faith never rejected Islam…’ Perhaps, a little bit of research would have told him that ‘Sufi faith’ is Islam. Had he not been in a hurry, he would have even realised how the history of victors can never be taken as accurate because these are commissioned works, written ostensibly to portray the benefactor as larger than life.

Even Mirza Ghalib understood this. He wrote:

Ghalib wazeefa-khwar ho do Shah ko dua/ Wo din gaye ki kahte the naukar nahin hoon main (Ghalib, now you are a pensioner, praise the emperor/ Gone are the days when you claimed you weren’t a servant)

It stands to reason that if the eight-century long Muslim rule in India was so tyrannical and debilitating, how did the majority of Indian population remain Hindu. Why none of the Muslim tyrants impose Shariah? Why didn’t Hindus collectively rise up against these tyrants to throw them out? And most importantly, when they did rise, why was it under the banner of a powerless Muslim tyrant to throw out the British?

Another Hindutva trope that Varma peddles is the idea of an emasculated Hindu. In the chapter on British Rule and its Aftermath, he writes, ‘If the wanton destruction by the Turkic invaders—and by the Muslim dynasties in India that followed it—traumatised the natural evolution of Hindu civilisation… British rule colonised the Hindu mind and robbed it of self-worth and esteem.’

Varma saves the best for the last. All pretence is dropped in the concluding chapter, The Challenges of the Modern Republic, where he urges the readers to view people like Savarkar, Hedgewar, Golwarkar etc in the context of their times, especially in view of the appeasement of the Muslims by Gandhi himself, and the tolerance of the Muslim sectarian politics by the British. Moreover, Savarkar’s animosity towards Muslims was also because of the Muslim guards in Andaman who were particularly brutal towards him, he mentions. His magnanimity for the RSS stems from the fact that post-Partition and the 1962 war, the organisation did community work, including fund-raising. Interestingly, Pakistan-based Jamaat-ud-Dawa’s website also lists the range civic work the organisation does in addition to nurturing terrorist groups like LeT and JeM.

To be fair to Varma, his tone through the book is apologetic. He frequently points out that his intention is not what it appears to be. Frankly, it’s immaterial whether Hindus were a great civilisation or not. It is a truism that Hindu as a faith and philosophy is both complex and refined. In terms of ideas alone, it reflects evolution and civilisation. Had Varma expounded on that alone, he would have served up a collector’s item.

Confession No 3: He has managed to kindle my interest in Advaita Vedanta. It’s a concept I want to understand. Recommendations are welcome.