The Airshow China 2021 exhibition, held at Zhuhai in southern China’s Guangdong province from September 28 to October 3, saw prominence being accorded to several new-generation unmanned aerial vehicles (UAV)—both armed and unarmed—that are expected to be exported worldwide in large numbers.

Since the beginning of the previous decade, China has emerged as the principal supplier of such UAVs to almost all of the world’s trouble-spots, especially in the Middle East and North Africa. In Asia, such platforms have been exported in large numbers to Indonesia, Iran, Jordan, Kazakhstan, Nigeria, Pakistan, the Kingdom of Saudi Arabia, Turkmenistan, the United Arab Emirates and Uzbekistan. 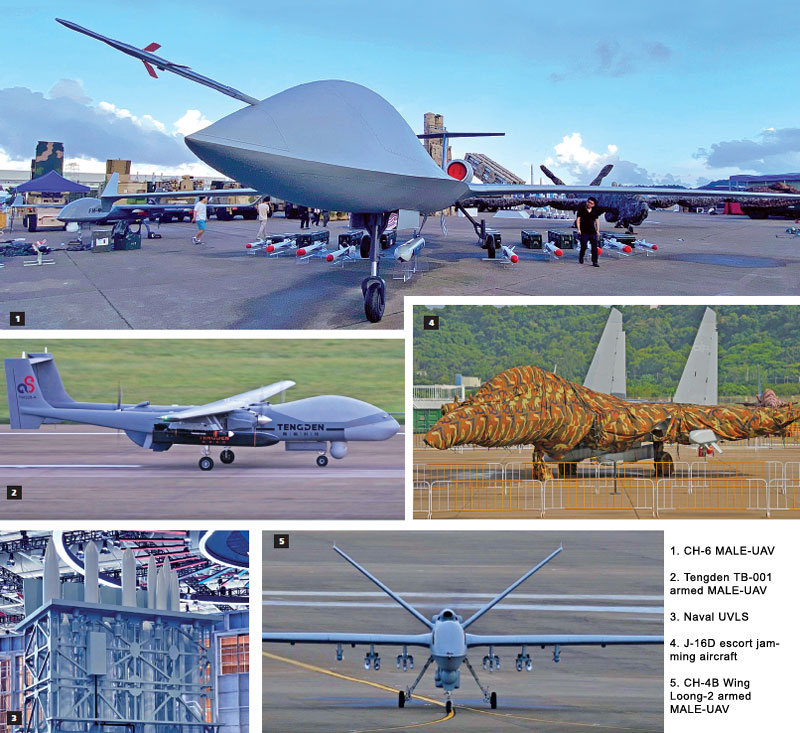 At the expo, state-owned China Aerospace Science & Technology Corporation (CASC) exhibited its latest medium-altitude long-endurance (MALE) armed UAV, the CH-6 (Cai Hong 6, or Rainbow-6), which was developed by the CASC-owned China Academy of Aerospace Aerodynamics—also known as the 11th Academy. The CH-6 has a maximum take-off weight of 7.8 tonnes, can host a 300kg reconnaissance sensor payload and 2,000kg weapons payload, has an overall width of 20.5 metres, length of 15 metres, height of 5 metres, maximum cruising speed of 800kph, service ceiling of 12km, cruising range of 12,000km, and maximum cruising time of 20 hours.

China’s Sichuan Tengden Technology Company (Tengden) unveiled its three-engined variant of the TW-328/TB-001 armed MALE-UAV, whose maiden flight from the Zigong Fengming General Airport in Sichuan province had taken place on 16 January 2020. This platform has a flight ceiling of 9,500 metres, a maximum climb rate of 10 metres/ second, and a maximum cruise speed of more than 300kph. The twin-boom airframe with retractable undercarriage has an overall wingspan of 20 metres, is 11 metres long, has a maximum take-off weight of 3.2 tonnes and an endurance of 35 hours. Two years ago, Saudi Arabia signed an agreement with Tengden to licence-produce the TB-001 as the Al Eqab-1.

Meanwhile, the Chengdu Aircraft Industry Group (CAIG), which had unveiled its Yun Ying (Cloud Shadow) armed MALE-UAV in 2016, re-branded the platform as the Wing Loong-10 (Pterodactyl-10). Also showcased was its Feng Ying (Wind Shadow) weather-monitoring variant. Both variants have their wings, fuselages and tail sections built of composite materials. The airframe lengths and heights are 9 metres and 3.66 metres, respectively, while the take-off weight is 3,000kg and payload capacity is 400kg. Wingspan is 34 feet. The tail section comprises two vertical stabilisers arranged in V-shape. The tailfins are canted outward to improve aerodynamic efficiency at high altitudes. Take-off and landing of the aircraft is assisted by a tricycle-type landing gear, comprising one single-wheeled steerable nose-leg and two single-wheeled main gears. Powered by a single WP-11C turbofan, the Wing Loong-10 has a top speed of 620kph, can cruise at an altitude of 14,000 metres and has the ability to transmit data via data-link to a distance of 290km within the line-of-sight. Internal fuel capacity is 1,000kg, which enables the platform to stay airborne for up to six hours.