The navy continues to be committed to indigenisation in all domains, says Navy Chief

Addressing the annual press conference ahead of the Navy Day in New Delhi, Navy Chief Admiral Karambir Singh said the long-term plan of the Indian Navy is to have three aircraft carriers. He also revealed that the nation’s first indigenous aircraft carrier (IAC-1) will be operational by 2022, and will be armed with MiG-29K aircraft. 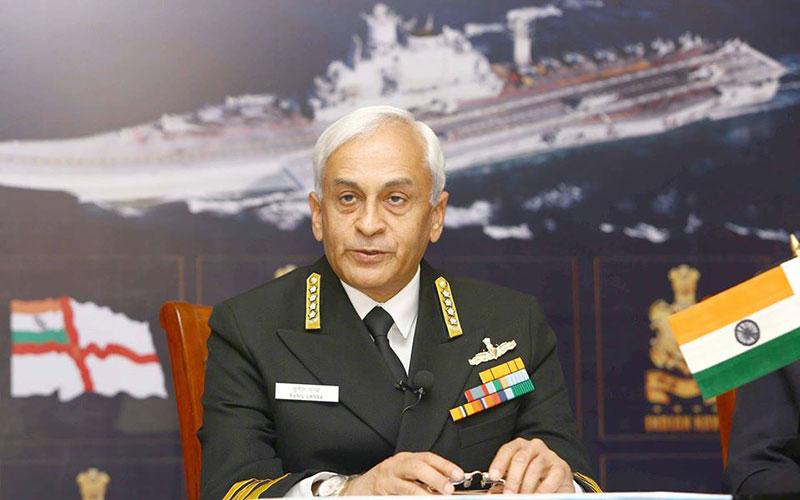 Speaking to reporters on December 3, the Navy Chief confirmed that 41 more ships were ordered and work on aircraft carriers was ongoing. He added, “50 warships and submarines of the Indian Navy are under construction, of which 48 are on order in Indian shipyards.”

Talking about the status of projects under ‘Make in India’, he said that since December 2018, about 88 per cent of the navy’s contracts and acceptance of necessity (AoN) by value have been successfully concluded with, or accorded to the vendors.

The Navy Chief emphasised that the force had been committed to self-reliance since Independence, and continues to push for indigenisation in all domains. He said, “Our commitment to this pursuit is seen by the fact that out of 50 ships and submarines currently under construction, 48 are being built in Indian shipyards. These include the aircraft carrier Vikrant, P-15 bravo class destroyers, P-17 alpha class stealth frigates, Offshore Patrol Vehicles and Scorpene Class submarines.”

He also commented on the deal regarding 24 MH-60R multi-role helicopters, saying the Letter of Acceptance (LoA) from the US was here and the deal is expected to be signed. Replying to a question on the naval version of Light Combat Aircraft (LCA), he said the arrested landing tests were completed successfully, which was a technology demonstration. He said the navy was the first to support LCA, adding that the Defence Research and Development Organisation (DRDO) was pitching the twin-engine deck-based aircraft to the navy.

On the challenges in the Indian Ocean Region (IOR), he said India is watching the presence of assets from some countries in the region, including China. He also said that the Indian Navy had thwarted 44 piracy attempts, arrested 120 pirates and escorted 3440 shipping vessels around Aden this year.

The Navy Chief said the Indian Navy was ready to work with like-minded nations based on common interests of ensuring safe and secure seas and promote rules-based order, regarding the strategy in the realm of Indo-Pacific region. The quadrilateral coalition of India, the US, Japan and Australia, also called the QUAD, does not have military role but rather a stabilising role in the Indo-Pacific region, he said.

The Indian Navy is increasingly focusing on exercises with foreign navies, which it believes has improved relations with a number of like-minded nations and enhanced interoperability with our friendly nations. “This year, we exercised our composite combat capability through the navy’s largest biennial war game, Theatre Level Operational Readiness Exercise (TROPEX-19),” said the Navy Chief. He added that the force was giving unprecedented significance to regional maritime exercises with Friendly Foreign Countries (FFCs).


“From a conservative figure of eight exercises in 2015, we are now participating in close to 30 bilateral/ multilateral exercises. In addition, under the government of India’s overall ambit of ‘Neighbourhood First’ policy, the navy also undertook Joint EEZ patrols of Maldives, Seychelles and Mauritius as well as Coordinated Patrols (CORPATs) with Bangladesh, Myanmar, Thailand and Indonesia,” he added.

The Indian Navy, as the Admiral reiterated, has upped its anti-piracy deployment beyond thousands of kilometres from the Indian shores. The Indian Navy, he said, was also one of the first maritime forces to respond to the security situation in the Gulf of Hormuz in early 2019.

“Ever since, we have maintained an unbroken presence in the region escorting approximately 82 lakh tonnes of cargo on board 74 Indian Flagged Merchant Vessels,” he added. He further added, “Even as I speak, one of our ships is deployed in the Straits of Hormuz to reassure our merchant marine and enhance security in this region as part of Operation Sankalp.”

The Navy Chief also raised the alarm on the dwindling budget, pointing out that it was seeking additional funds from the government to cope with the crunch. India’s maritime capability perspective plan envisages creating a 200-ship fleet by 2027, which now seems difficult.

At the conference, he didn’t shy away from highlighting the financial constraints facing the force. “It is a fact that our budget has decreased. We have projected this. Our hope is that we will get some money and accordingly we will prioritise,” he said.