Fighting intrusion by protecting 2000 sqkm from a single node 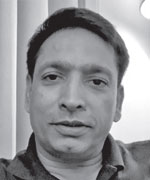 The last year saw some lethal drone attacks happening in the Indian periphery and even abroad. The drones dropped high grade-explosives damaging the roof of a building and injuring personnel on duty. This was a clear indication towards an ominous future that would be employing Unmanned Aerial Systems (UAS), autonomous weapons systems as new modes of attack strategy.

Drones and UAVs were largely military assets till the beginning of the last decade. Soon, this technology caught the fancy of a large number of aero enthusiasts and rapid proliferation started in the civil space, and several pressure groups and influencers have been advocating the rapid mainstreaming of drones into everyday life. Medical supplies, Logistics and Disaster Management in the civilian space are some compelling use-cases. In the military space, there are many drones which are already armed and provide unsurpassed air time. These will be increasingly used in all theatres and will slowly take over the role of primary enforcers of military intent.

From a security perspective, proliferation of drones, both for military and civilian employment will be viewed with a lot of trepidation. The threat of drones being brought to use, by various militia and terror organisations is real, as is borne out by events like the ARAMCO attack as well as the extensive use of drones by the militia in Syria. Armed conflicts in the Balkans have taken the envelope even further. The threat is real and, in our vicinity, as is borne out by everyday events across our northern and western borders. The proliferation of drones in the civilian segment is also leading to increased espionage/ surveillance over critical infrastructure, military stations, scientific establishments and space stations. There have been increased instances of corporate surveillance, disruption of air traffic and dropping of arms/ ammunition, which also merit equal attention.

Most Anti UAV systems are developed with a Point Defence Concept approach. Such deployments yield limited protection that cover an area of 3-5 sq km at best. This limitation is largely imposed by sensors and weapons under consideration and co-location of these. In an area populated with several vantage points, meriting equal Anti UAV defences, like in a battle front spread over tens of sq km, a large military base, a vital part of the National Capital Region, a Defence manufacturing facility, a vital Scientific establishment, an Oil asset, a Strategic national asset etc. the possibility of employing multiple systems is remote and simultaneously the ability to defend the asset with a single system is minimal. Under these conditions, defending such large areas falls under a radically different concept called the Wide Area Defence Concept.

Also, most Anti Drone systems developed and being marketed across the world are majorly catering for mini and micro drone detection and neutralisation. In the specific context of the entire spectrum, especially in the military context, a far more pervasive solution would be needed. In real terms, a single system of systems concept that has the ability for wide area deployment and sustained operations is the need of the hour.

As mentioned above, the limited protection that Anti UAV systems offer needs to be changed. The periphery under protection has to be increased and that can be achieved with a Unified, Distributed, Wide-Area Autonomous Drone Defence Dome. Indrajaal or AD3 is a technology designed to protect a large area of 1000-2000 sq. km from a single node, against threats such as UAV’s, Incoming Weapons, Loitering Munitions, and Low-RCS (radar cross-section) targets autonomously.

Wide Area AUAV implementation can be accomplished by distributed detection and centralised operations. A modular deployment, a well-defined network, efficient process flows, AI driven Algorithms will be central to achieve this solution. There are several advancements in the space of sensors and detectors that can be taken into consideration for implementing wide area detection and will form the bedrock of this conceptual transportation. Certain key concepts are illustrated hereunder.

Active Trans-Receivers: The form factor for active trans-receivers for RF detection is evolving rapidly. The possibility of deploying trans-receivers distributed over a wide area, with limited RF pre-processing at each location is a reality. Under the conditions, distributed RF based detection would be the first stage of the wide area AUAV solution that extends the reach and effectiveness against non-co-operative targets.

Passive Receiver Systems: Passive RF detectors have longer ranges as compared to active detectors. These detectors are often used in UAV detection. However, the classic deployment of such elements in the object area defeats the very purpose of passive detection, as UAVs in the terminal phase often operate under radio silence. The distributed deployment of passive receivers over a wide area will extend the reach and effectiveness of the detection layer and provide for detection ahead of the UAV radio silence zone.

Distributed Pre-Processing (AICU): Deploying multiple RF trans-receivers over a wide area will entail a requirement for localised pre-processing. Transportation of RF over a large distance is an impractical proposition. An intelligent AI driven Control Unit (AICU) will be the one-point interface for all system elements of the wide area AD3 solution. The AICU works as a systems hub and work on an embedded AI enabled software and perform special functions including sensor identification, sensor calibration, scintillation management, clutter elimination, object classification, data pre-processing, intelligence extraction, networking and backhaul. Each AICU would be a mini-hub capable of integrating one or more AD3 elements.

EO-Thermal: Electro Optic sensors and thermal detection complements the RF detection in many ways. These systems are variably used for initial detection, verification and identity determination in the AUAV space. Conventionally these systems are often slaved to the Radar or Weapon system, limiting their envelope and effectiveness. The wide area concept demands unbundling of these elements for optimising the envelope and effectiveness of these systems. Tactical management of these systems in the context of Rogue engagement are handled by the AD3 Command and Control platform.

Weapons Integration: Weapon systems employed in the context of an Anti UAV system are often a combination of deterrents, capture elements, annihilators and disablers. Pure hard kill in the form of smart missiles and platform mounted guns are also used in certain military contexts. Deployment of these weapons is governed by various principles such as last line of defence, point of ingress, defended area and effective use of force. In any case the deployment pattern is dictated by the deployment settings. The wide area, AD3 solution caters for distributed positioning and centralised control.

AD3 Command and Control: The C4ISR Platform of the AD3, will perform functions of System Integration, Sensor management, Weapons integration, Platform management, Process automation, Decision support and other Command and Control functionalities. This platform is built with heavy influences of Artificial Intelligence in the embedded Algorithmic processes. This functionally complex platform is usually a central part of the system architecture and is built in a modular fashion. Major functionalities of the AD3 C4ISR platform will include unification of the sensor data, data interpretation, data context, threat assessment, weapons assignment, weapon control, sensor assignment, automated weapons engagement.

3-Dimensional Projection: The presentation of the system output needs to be hardware agnostic in as much as possible and support all kinds of data projections. The system is to be developed over a strong Geo-context, with disparate data format support. Three-dimensional data projections, elevation data, terrain maps, contours lines and geographical features would form the underlay for better assimilation of the situational picture. The Display platform would need to be available in a large form of contexts and Operating environments.

Air Space Management: The advent of High altitude, long endurance drones is blurring the boundaries between manned aircraft and drones. Missile Systems, Anti-Missile Weapons, SSMs, Ballistic Missiles, Cruise Weapons, Loiter munitions, UAV, UCAV, Fighter aircraft and Heptrs occupy the same airspace segment. Under these influences, air space management in different silos is far from an option. Attempting to integrate all of this into a singular platform, would be cumbersome and counter-productive. The wide Anti UAV system spun off as a distinct layer would need constant access to the air space data and would be designed as a part of the overall Air Defence and Air Space Management systems.

Indrajaal or AD3 is the 3rd revolution of warfare. It’s design principles are based on delivering autonomy to the Defence Forces leveraging a combination of 9-10 modern technologies powered by Artificial Intelligence, Cybersecurity and Robotics that is capable of identifying, assessing, deciding, acting and evolving autonomously, in real-time. Whether the threat is single or multiple or a combination of UAVs, Low-RCS, Loitering munitions and such, Indrajaal is capable of countering every threat.

This scalable deployment pattern of the AD3 system can be optimally designed to meet different wide area and linier infrastructure requirements. This system if deployed would serve as the single point of interface and minimise conflicts of Command and Control. Needless to say, this will optimise costs and improve efficiency of the response as a whole.

We need to understand that the threat is coming from extremely well-developed autonomous military-grade technologies. Therefore, what our defense organizations need is for a far more comprehensive approach by creating a sub-space of Air Defence. A suite of multi-spectral illumination, wide-area deployment, distributed pre-processing, network-light data transfer, evenly dispersed weapon reach, autonomous engagement powered by Artificial Intelligence, would be necessary to protect linear infrastructure and large strategic assets. An immediate move in this direction will be the only option for defences to stay on par with the huge movement in the autonomous weapon-platform space involving UAS and SWARM threats.