China’s biggest parade staged to date at the Tian’anmen Square in celebration of the 70th founding anniversary of the country, featured 15,000 troops, 160 fixed-wing aircraft and helicopters, and 580 pieces of equipment of which 40 per cent were showcased for the very first time on October 1. 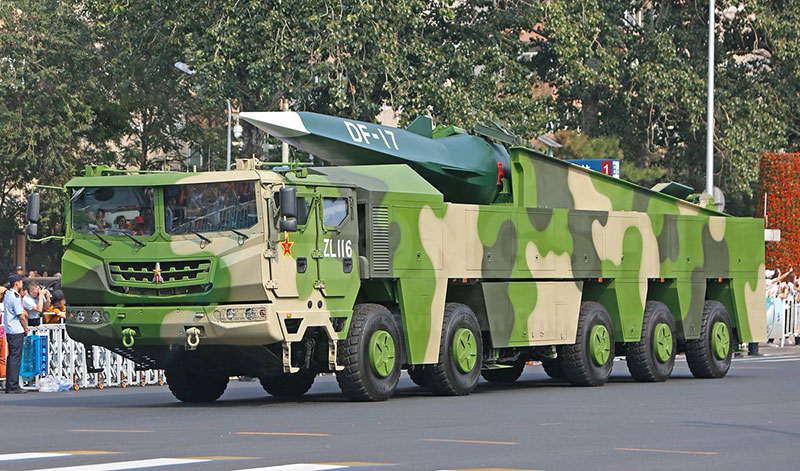 This was also the first parade that was attended by Chinese President Xi Jinping in his capacity as the General Secretary of the Communist Party of China’s (CPC) Central Committee, Chairman of the Central Military Commission, and Commander-in-Chief of the People’s Liberation Army (PLA).

During his pre-parade inspection of the participating contingents, Xi, wearing a high-collar dark grey Chinese-style suit, repeated salutes through microphone: ‘Salute to you, comrades!’ and ‘Comrades, thanks for your hard work!’ The soldiers in turn saluted Xi and exclaimed: ‘Hail to you, Chairman!’ and ‘Serve the people! Follow the Party! Fight to win! Forge exemplary conduct!’

The DF-ZF has been flight-tested by China nine times, on January 9, August 7 and December 2 in 2014; June 7 and November 27 in 2015; and in April 2016. This was followed by its launch from a DF-17 on November 1 and 15, 2017. The DF-ZF detached from the DF-17 during the re-entry phase and flew approximately 1,300km to a target. In actual use, the DF-17 will boost the DF-ZF to Mach 5 or faster, at which point the latter would separate from the booster and angle toward its target, manoeuvring to correct its course or evade enemy air-defences.


An HGV deploys from a ballistic missile, then glides to a target on a flight path much different (and much less predictable) than that of a traditional ballistic missile. The glide path is lower and slower than a normal ballistic missile payload, although still generally higher and faster than a traditional cruise missile. The DF-17/DF-ZF combination is configured as a conventional munition with its destructive effect being derived from the kinetic energy of the HGV. The average speed of the DF-ZF has been assessed at 2,121 metres/second, or about Mach 6. It has been under development since the previous decade by Department 7 of the PLA’s Naval Aeronautical Engineering Institute in Yantai, Shandong province.

Making its public debut was the GJ-11 Lijian (Sharp Sword) stealthy unmanned aerial system (UAS) for battlefield reconnaissance, which was jointly developed by Shenyang Aerospace University, Hongdu Aviation Industry Group and Shenyang Aircraft Design Institute (both part of the state-owned Aviation Industry Corp of China, or AVIC). The Lijian is one of seven different UAS platforms designed as part of AVIC’s Project 601-S and made its first appearance in 2013, when it flew for the first time. The Lijian is about 33 feet long and has a wingspan of about 46 feet.

Another UAS shown for the first time was the WZ-8 high-altitude, supersonic reconnaissance UAS, which featured delta-shaped wings and inclined stabilisers mounted on two big winglets. The combination of this aerodynamic configuration and the presence of two attachment points on the fuselage mean that the WZ-8 is air-launched by aircraft like the Xi’an H-6 bomber. The WZ-8’s exhaust nozzles appear similar to the ones found on liquid rocket engines and hybrid rocket engines.

A UAS that has now entered service with the PLAAF is the GJ-2 (also known as the CH-4A Wing Loong-2 for export markets) armed system, which too was unveiled during the parade. A modified version of this platform (numbering 48 units), featuring winglets, was ordered last October by Pakistan. These will be supplied by the AVIC-owned Chengdu Aircraft Corp (CAC), while the Kamra-based Pakistan Aeronautical Complex (PAC) will licence-assemble them. The GJ-2 is designed for both reconnaissance and strike missions, and has a payload of up to 480kg, including YJ-9E anti-ship missiles.

Powered by a turboprop engine, it can fly for up to 20 hours at speeds of 370kph and has a maximum service ceiling of 29,500 feet. The airframe is 11 metres long, with a wingspan of 20.5 metres.

Also making its debut this time was the ASN-301 anti-radiation loitering drone. Reverse-engineered from the Israel Aerospace Industries-developed Harpy drone (that was acquired by China in the late 1980s), the ASN-301 has an endurance of four hours, a range of 280km and a seeker range of 25km. It targets radar frequencies from 2 to 16 GHz. The ASN-301 is stored in six launchers, mounted on a 6 x 6 Beiben truck.

The PLAAF displayed three new-generation surface-to-air missile (SAM) systems: the HQ (Hong Qi or Red Flag)-9B, the HQ-17A and the HQ-22. The HQ-9B has a range of up to 250km and a maximum altitude of 50km. It is capable of engaging cruise missiles and standoff precision-guided munitions, as well as fixed- and rotary-wing aircraft.

Although both systems were unveiled at the 2016 Zhuhai Airshow, their appearance this time marked their introduction to service. Initially known by its export designation of FK-3, the HQ-22 has a range of up to 170km and an effective altitude from 50 metres to 27km. The HQ-17A, a re-engineered clone of the Russian 9M330 Tor-M1 SHORADS, comes equipped with solid-state track and fire-control radars and is mounted on a 6×6 armoured vehicle. The cold-launched missiles have a range of 12km.

Shown for the first time was the Xi’an H-6N, an improved version of the H-6K bomber that flew for the first time in December 2016. The H-6N’s bomb-bay doors have been removed and replaced with a concave belly recess, which can be used for the carriage of hypersonic air-to-surface missiles. The H-6N also features a nose-mounted an inflight refuelling probe. This is especially useful since the bomber would most likely be taking off with a lower fuel load when the heavy solid-fuelled air-to-surface missile is loaded up. This refuelling capability, paired with cruise and rocket-powered missile armament, gives the H-6N the endurance to strike virtually anywhere in areas of interest in the Indo-Pacific region. The Harbin Z-20 medium-lift utility helicopter, similar in appearance to the UH-60 Black Hawk, was also shown publicly for the first time at the parade, although this helicopter had entered service with the PLA Army back in November 2017.

Making its public debut was the China Aerospace Science Corp (CASC)-developed DF-100 road-mobile tactical air-breathing cruise missile, which comprises a CX-1 missile (that bears a strong resemblance to the BrahMos-1) and a waverider-type HGV that measures less than eight metres long and 1.3 metres in diameter, and can be launched from an altitude of 30km.

During independent flight, this waverider HGV, relying on its own power, can conduct extreme turning manoeuvres, maintain velocities above Mach 5.5 for more than 400 seconds, and achieve a top speed of Mach 6, or 7,344kph. To date, this HGV has travelled to a distance of 677km. A more advanced version of the CX-1 missile, known as Lingyun-1 (which translates to ‘Reach the Clouds’), is now under development by the College of Aerospace Science and Technology of China’s National University of Defence Technology with the help of funding provided by the National Nature Science Foundation of China (NSFC), an entity attached to China’s State Council.

The Lingyun-1, featuring a scramjet, was displayed for the first time at an expo during National Science and Technology Week on May 19, 2018. The scramjet was first test-fired in December 2015 from the Jiuquan Space Centre it and reached a top speed of Mach 7 and maximum altitude of 30km. During this flight-test, the two-stage missile (comprising a solid-propellant booster, and the main engine, with a diameter of about 80 centimetres), has an axisymmetric tapered air inlet and four stabilising fins. This is an air-breathing system, meaning that it is not designed to leave the atmosphere, not meant to cross the oceans or carry a nuclear warhead. Instead, such a missile, to become available by 2023, will carry a conventional payload and attack a defended target like a warship, a port, or an air base through swarm-type anti-access/area-denial strike tactics.