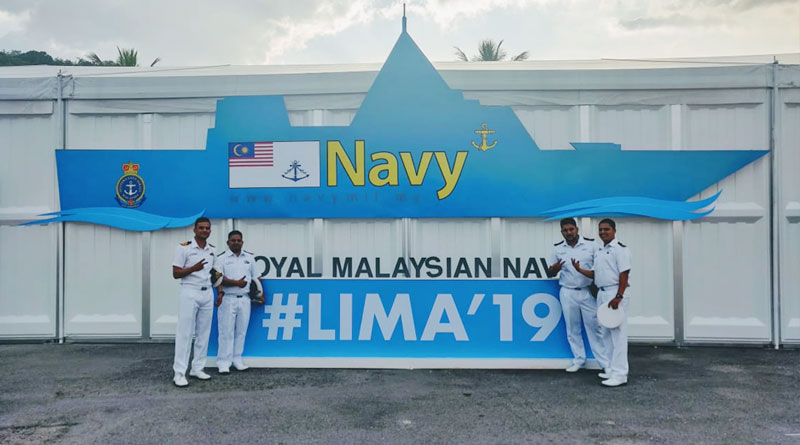 On March 26, LIMA 2019 opened with a formal inauguration by the Prime Minister of Malaysia, Y.B. Mahithir Bin Mohammad during a grand opening ceremony at the Mahsuri International Exhibition Centre (MIEC).

FOC-in-C Eastern Naval Command, Vice Admiral Karambir Singh attended the opening ceremony along with the CO INS Kadmatt, Commander Sachin Dhir. Subsequently, Kadmatt’s crew participated in the Man and Cheer Ship while the Chetak helicopter embarked onboard took part in the flypast as part of the final Dress Rehearsal of the International Fleet Review (IFR) which was held on March 27 and reviewed by PM Mohammad.

Indian Navy’s frontline ASW corvette, INS Kadmatt arrived at Langkawi, Malaysia on March 25 to participate in LIMA 2019. The ship participated in numerous activities planned as part of LIMA 19 during the seven days at Langkawi, maritime and air demonstrations, Sea Exercises with 29 other participating navies, cultural exchange programmes, cross visits to ships, sporting events. Numerous seminars and interactions were also held on the sidelines of the main event.

Malaysia and India are maritime neighbours and the two navies continue to interact closely on issues related to training and exchange best practices during visits by ships from both sides. As part of such friendly engagements, Royal Malaysian Navy (RMN) Ship K.D. Jebat, a frigate underwent the Operational Sea Training by Flag Officer Sea Training FOST at Kochi in October 2018 and RMN KD Lekir had participated in the IFR held off Visakhapatnam in February 2016.

Rosoboronexport (part of the Rostec State Corporation) arranged a unified Russian exhibit at the 15th International Maritime and Aerospace Exhibition LIMA 2019, which was held on March 26-30 on the island of Langkawi, Malaysia.

“Malaysia is Russia’s long-time partner in the area of military and technical cooperation, which has amounted in the volume of USD 2 billion over the past 25 years. Nowadays, the relationship between our countries is developing in a steadfast manner and has strong prospects for the future progress. Rosoboronexport is working actively on various strands, including the supplies of Russian-made final products, after-sales service and modernization of the combat aviation equipment, which has been previously supplied to Malaysia. A number of events were organised at the LIMA 2019 exhibition, which were aimed at the intensification of our cooperation with the ministry of defence and other law-enforcement agencies of the country,” said director general, Rosoboronexport, Alexander Mikheev.

“Rostec is a traditional participant of the LIMA International Exhibition. For us it is an excellent opportunity to present the latest Russian products and technologies in the territory of our long-term and reliable partner, with whom we are going to further expand cooperation. LIMA 2019 will give a new impetus to the development of our cooperation with Malaysia as well as with the entire Asia-Pacific Region,” noted director general, Rostec, Sergey Chemezov. “The Asia-Pacific Region is one of the key markets for Rostec, and it makes around 40 per cent of all the supplies provided by Rosoboronexport.”

The legendary Russian Knights aerobatic team were one of the main participants to the exhibition’s flight programme. The Russian pilots will demonstrate elements of solo and group super maneuvering on cross-functional Su-30SM fighters in the sky over the island of Langkawi.

At its stand, Rosoboronexport demonstrated more than 300 specimen of military equipment and materiel having a considerable export potential in the Asia-Pacific Region in general, including such new products from the company’s portfolio as AK-12 and AK-15 Kalashnikov assault rifles, BT-3F armoured personnel carrier, Il-76MD-90A (E) military transport aircraft, ‘Pantsir-ME’ shipborne air defence missile and artillery system and the ‘Orion-E’ complex with unmanned aerial systems

Turkish Aerospace, being ambitious in Asian market, is going to hold various negotiations. The export negotiations for ANKA UAV Systems, which is the most closely related type of interest for Asian countries, initiated in the last year’s exhibition in Malaysia, will continue.

Turkish Aerospace is effectively carrying out its activities in order to introduce ANKA UAV Systems in Asia thus, will conduct high level meetings for supply of ANKA UAV Systems to Malaysia.

The Langkawi International Maritime Aero Expo (LIMA-2019) took place in Langkawi, Malaysia from March 26-30. The IAF participated in the Maritime Aero Expo for the first time, during which it showcased its indigenously developed LCA fighter aircraft. The team departed from Air Force Station Kalaikunda for Langkawi on March 22 via Myanmar (Yangon).

Participation of the IAF in LIMA-2019 provided an opportunity to air-warriors to interact with their Royal Malaysian Air Force (RMAF) counterparts and foster close relationship between the two services. This served as a foundation for any future interaction with the Malaysian Air Force. It also provided an opportunity to RMAF to assess the capabilities of LCA.

The IAF contingent consisted of two LCA, one C-130J and one IL-76 ac along with 27 officers, 42 air-warriors and 11 HAL personnel.