Recovering from his back injury, Naval Commander Abhilash Tomy is eager to return to the sea as soon as possible

Lt Cdr Abhilash Tomy, who was stranded in a boat in the deep south of the Indian Ocean in September 2018 while on a race around the earth, is confident of taking on the oceans once again. The first ever Indian to circumnavigate the earth, Abhilash, while addressing a presser in New Delhi on 17 January 2019, said he wants to go back to the sea as soon as possible, but said it might take him a couple of years to recover fully. 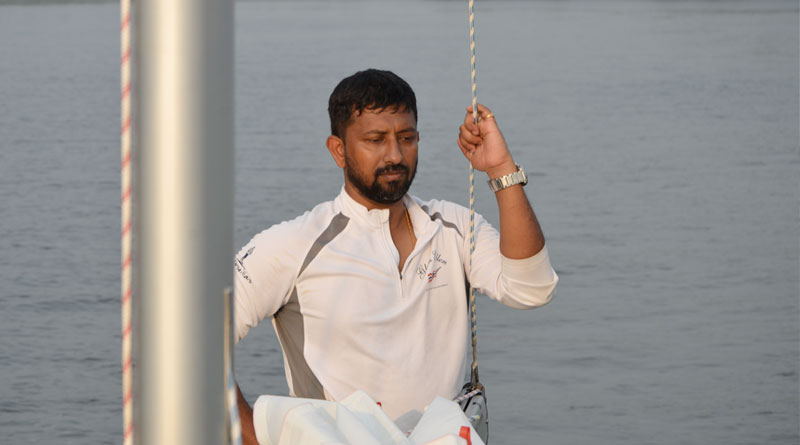 Participating in the Golden Globe Race as the only Asian, along with nine other sailors, Abhilash was on an arduous journey, unassisted by any modern navigation, on a 30,000-mile solo and non-stop race around the globe which kicked off in France. The storm hit him when he was around 1900 nautical miles from Perth, Australia. His boat was knocked down, with its boom broken and everything thrown around. “Our worst fears had come true, the storm had hit me, and I had nowhere to go,” he remembers.

The waves were about 15 metres high. “When the boat was knocked down, I found myself clinging to the top of the mast, and when it righted itself again, I fell from the 9-metre mast on to the boom, which caused severe injury to my back,” he says.

After being stranded at sea for three days, Tomy was rescued on 24 September 2018 by a French patrol boat, after being located by the Indian Navy’s P8i aircraft. During the time, Abhilash was in constant touch with the race organisers through his only communication device, a satellite phone.

Abhilash was in the third position among 11 international participants when the accident happened and had sailed over 10,500 nautical miles since the race began on July 1. He said he approached many Indian ships during the journey, and established radio communication with the captains of the ships who made him to speak to his wife, while as per rules of the race he couldn’t use his satellite phone to do so.


Abhilash said he had to train in celestial navigation as no modern navigation or GPS was allowed. So, he had to rely on the stars, the sun and the moon to navigate. The preparations for the grand race had been a long-winded affair, the boat had to be freshly constructed and was sent to the Netherlands for assembling. Abhilash had to identify spares and tools, repair materials, and all the things necessary for survival on the long journey.

“Until today, almost 6,000 people have climbed Mt Everest and almost 600 have been to space, but the number of solo non-stop circumnavigators on this planet is less than 100,” says Abhilash, emphasising on the significance of the solo circumnavigation.

In his 18 years in the Indian Navy, 39-year-old Abhilash has sailed more than 52,000 miles in the oceans, creating new records along the way. And he hopes to sail again soon.

“I look forward to storms, I have been through them. What’s the adventure if there’s no storm?” he wonders, saying, “being confronted by a storm was paisa vasool for me.”

A reconnaissance pilot in the Indian Navy, Lt Cdr Abhilash Tomy had made history when on 6 April 2013, he become the first Indian to circumnavigate the earth under sails – solo, nonstop and unassisted. He had set sail out of Mumbai on 1 November 2012 in the sail boat INSV Mhadei to undertake a voyage no Indian had attempted before, and few had dreamt of. He was awarded India’s second-highest peace-time gallantry award, Kirti Chakra, for the feat.

It was in 1895 when a man called Joshua Slocum sailed around the world in a boat called Spray, doing it single-handedly, which is the first known single-handed circumnavigation of the earth undertaken by anyone. Then in 1966, 65-year-old Sir Francis Chichester sailed around the world single-handedly in his boat called the Gipsy Moth IV, starting from the British Islands. He stopped only in one place, in Sydney, and came back to his starting point in 266 days.

Soon enough, in 1968, The Sunday Times announced a race around the world, which would lead to the first solo, non-stop, unassisted human circumnavigation of the earth under sail. The race was announced by Francis Chichester himself. The Golden Globe Race quickly became a legend for sailors and non-sailors alike with its triumph and tragedies and epic human endeavour in facing the unknown. The race continues till today, attracting adventurers around the world for the grand race.