But organisational structure must be suited for Indian conditions, says air chief

In a sign that things have returned to normal since the advent of the Covid-19 pandemic, the venue for the press conference for the 90th Air Force Day celebrations was back to the Aakash Officers Mess in New Delhi. The venue, smaller as compared to the one from last year, required no social distancing, a sign that the pandemic has receded, after all. 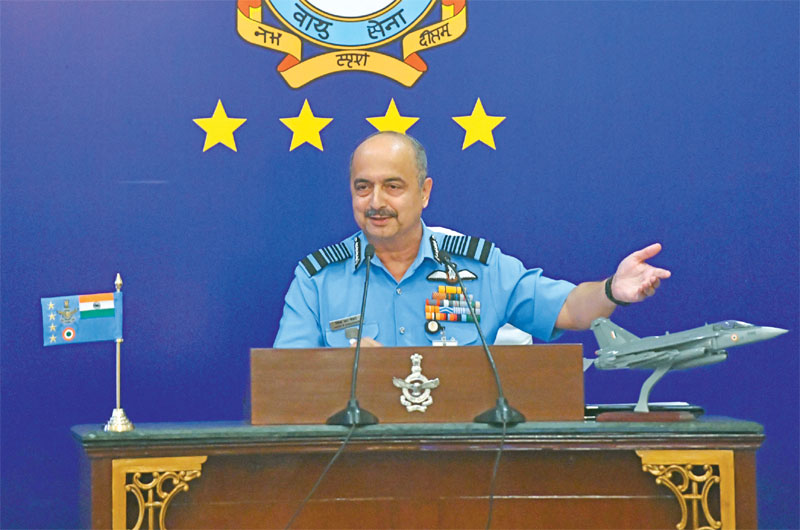 The Chief of Air Staff, Air Chief Marshal Vivek Ram Chaudhari, addressed the press conference and outlined the air force’s position on theatre commands. The chief said the air force was not opposed to it but the force had certain reservations. He said, “Air power has the unique capability of undertaking independent strategic operations as well as operations coordinated with sister services and other arms of the national security apparatus. We understand the imperativeness of joint planning and execution in future wars and are keen on integrating the efforts of the three services.”

He put forward three views of the air force. He said the air force believes that the model of integration must be future-ready (should cater to cyber warfare, space warfare and not just traditional domains of warfare), it must reduce levels of decision-making and capitalise on the strengths of all the three services. “We need an organisational structure that is best suited for Indian conditions and our geopolitical imperatives,” the Indian Air Force chief said. He reiterated that the doctrinal aspect of the IAF should not be compromised in any way and that core competencies must be synergised.

According to the Air Chief, the air force had recently updated and revised the IAF doctrine to keep it relevant. The next step would be to use the air force’s doctrines and well-trained manpower to evolve employment philosophies and concepts of operations. This would require joint planning and joint execution of plans. He said, “No single service can win wars on its own and this holds good even for the future.” To keep pace with technological developments in the field of aviation, the training pattern, curriculum and methodology has been made modern, innovative, flexible, and disruptive.

Regarding the situation in Ladakh, the Chief of Air Staff said, “The air force keeps monitoring the situation as far as the PLAAF goes. Infrastructure development continues to take place at a rapid pace across the LAC, particularly in the eastern Ladakh sector.” In regard to the increased air activity by the Chinese, the air force continuously monitors it by enhancing our air defence efforts. “We have increased the presence of radars and other systems; we have networked them into IACCS network and appropriate non escalatory air defence measures are taken on time. We have been able to signal our intent and state of readiness with the actions we have taken so far,” he said.

Asked if the air force was suffering from platform maintenance issues owing to the Russia-Ukraine conflict, he said almost six months had passed since the war began but the air force had not felt the shortage of any spares or components and that supplies were continuing. Since the past few years the force has encouraged indigenisation because of which they procure 62,000 spares and components domestically from base repair depots and local industry today. According to him, the dependency on Russia and Ukraine had been reducing day by day. “We are confident that with the domestic industry stepping up, we will be able to overcome any shortfall in spares that we have traditionally been acquiring from Russia and Ukraine,” he added.

He said, “The issue is quantity does not matter when it comes to conflict with the adversary, but quantity does matter when it comes to being able to spread across the large geographical area that we have to contend with. It is important when we must have persistence. When I say persistence, we need to have strong air defence capability round the clock. With the given numbers, it may be impossible to maintain a 24×7 combat air patrol or an air defence watch right across from Sir Creek to Siachen and further to the East.” He added that the numbers were essential, and 42 squadrons would remain, based on the current situation and on the mandate given to the IAF.

Listing the fighter squadrons that will gradually be number plated by the middle of the next decade, he said the first three squadrons that will phase out in the coming three years are the remaining Bison squadrons. This will be followed by the phasing out of the Jaguar fleet from 2025-2026 onwards. The depletion of the Jaguar fleet will continue to till 2032-2033. This is a time when even the upgraded Mirage and MiG-29 fleets will start depleting on having completed their calendar life.

The air chief evaluated the equipment the air force will have in the coming decade. The force will have fighter aircraft, transport aircraft, including the C-295 and the AWE&C Mk-II that is on the Airbus 321 platform, the design and development for which should be completed in another five years. Six aircraft should join the air force’s fleet by the end of this decade. As for the other force multipliers, the air force is hopeful of adding additional flight refueling aircraft to the inventory. “We are looking at modern surface to air guided weapon systems of all calibre and ranges. We are looking at newer radar systems, iStar platforms. We are also looking at innovation in terms of software having robust networks. Our focus will equally be on cyber and space domains. Acquiring of capabilities in these two will also continue,” he said.

He added that the air force was looking forward to inducting LCA Mk 1A, HTT-40 trainers, indigenous weapons and different radars. “We are fully committed to the development of LCA Mk 2 and AMCA. The induction of the C-295 aircraft is a step in the right direction and will boost the Indian aerospace manufacturing ecosystem. The IAF was also the first service to sign a contract under the iDEX programme for counter UAS systems. Mehar Baba II has also been launched and we hope to see significant progress in the domain of Unmanned Aerial Systems,” he said.

He said in the coming decade, the focus would be to ensure that the IAF remains a power to reckon with. Towards this, all efforts would be made to ensure that the drawdown of equipment was countered by robust procurement policies, innovations, better use of technology and tactics. “In the long run, at the end of 10 years, when we celebrate the centenary of the IAF we will continue to remain a major player in the world. We will be equipped with contemporary equipment at that time,” he said.

Over the years, the IAF has proved its capability across the entire spectrum of conflict ranging from peace, no war-no peace, and conflict situations. Traditionally, wars were fought on land, sea and air. Today, newer domains like cyber and space are increasingly affecting the conduct of operations even in the traditional realms. “To absorb these changes, the IAF is on the path of transformation so that we can fight and win tomorrow’s wars. We are in the process of acquiring and operationalising cutting-edge systems in our inventory. At the same time, the task of upgrading the existing inventory of aircraft, weapons and other combat support systems continues unabated,” Air Chief Marshal Chaudhari said.

Regarding women air warriors in the air force, he said, “We as an organisation are gender agnostic and recognise merit and performance above everything else. A high ratio of women officers in the IAF is testimony to our commitment in providing equal opportunity and a level-playing field for every individual irrespective of gender. These officers have proved themselves on every occasion and it is a matter of pride that one of our woman helicopter pilots has been recently conferred with the Vayu Sena Medal (Gallantry) for her contribution to disaster relief operations during flash floods in Madhya Pradesh.” The induction of women Agniveers was planned for next year. The recruitment of air warriors under the Agnipath scheme had been streamlined and 3,000 Agniveer Vayu would be inducted into the air force in December this year.

In the last one year, the transport and helicopter fleet had been extensively utilised to provide relief to citizens during floods and other natural calamities across the country. Air force helicopters played a pivotal role in rescuing trapped passengers on the Deoghar ropeway in April this year as well as in containing forest fires at Kasauli and Sariska tiger reserve. IAF C-17s flew 28 missions and evacuated 2,826 citizens from Ukraine in the early part of this year.