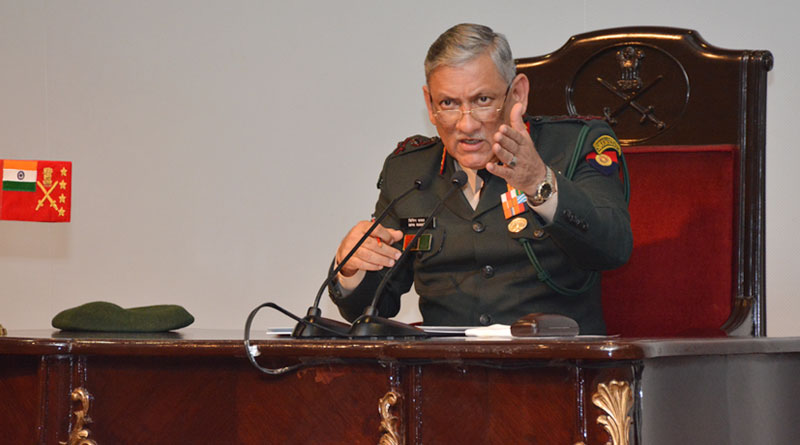 Addressing the media at the press conference on January 10, General Bipin Rawat said that he was in favour of talks with Taliban, asserting that India cannot be left out of the ‘bandwagon’ when countries like the US and Russia are already reaching out to Taliban. He noted that such engagement was necessary to pursue India’s interests in Afghanistan and that the ‘talks’ would have to be held without preconditions.

General Rawat, backing his stance on peace talks with Taliban, said, “A number of countries are talking to the Taliban. The issue we should address is — do we have an interest in Afghanistan?”

While India has been maintaining a policy of not engaging with Taliban, General Rawat said, “In some of the areas development has happened. There is a people’s voice emerging to say that we want peace. Therefore, some nations decided that let’s start talks with Taliban and see whether they can also be brought in the system of governance.” He added that India should not be left out of the ‘high table’ of key players engaged in the processes of peace talks.

His comments on talks with the Taliban followed from his previous address at the Raisina Dialogue on January 9 wherein he raised the issue for the first time. While India may not be pushing for ‘boots on the ground’ in Afghanistan, it has certainly been a key stakeholder in the peace and reconciliation process there. Last year in November, in a significant move, India had sent two former diplomats in a ‘non-official’ capacity to a conference on the Afghan peace process in Moscow, which was attended by a high-level Taliban delegation. This conference witnessed representatives from several countries including the US, China, and Pakistan.

However, General Rawat asserted that “the same analogy cannot be applied to Jammu and Kashmir. Talks in the state have to be on our terms.”

Answering a question pertaining to engaging in talks with Hurriyat, the army chief said that the issue of Kashmir is bilateral. He said that ‘terror and talks cannot go together’ and further clarified that talks with Kashmiri separatists cannot be a possibility unless they ‘shun the gun and stop the violence’.


According to General Rawat, the internal security situation, regarding Jammu and Kashmir, needs to be ‘brought under better control’.  He said that while the situation along the Pakistan and China borders was being managed ‘adequately’, the Indian Army has been employing a ‘hard and soft power approach’ in the valley, reiterating that the army can only play the role of facilitators of peace in Jammu and Kashmir.

Responding to a question on the Indian Army’s Apache attack helicopters, General Rawat said that the army needs to group the Apaches with its strike formations. India had signed a USD 3 billion deal for acquiring 15 Chinook and 22 Apache helicopters for the Indian Air Force (IAF) in September 2015, whereas only recently, in June 2018, the United States approved the sale of 6 more Apaches for the Indian Army. The add-on purchase was executed under the ‘options clause’ of the earlier deal for the IAF. While the Indian Army has been in a tussle with the IAF regarding the control of the Apache attack helicopters, General Rawat, clarifying his stance on the issue, said that the two services are working to reach a consensus on what role the Apaches will fulfil. He said that while Apaches are ‘tank killers’, they need to be grouped with the army’s strike formations to provide the necessary support to mechanised columns including tanks and mechanised infantry vehicles.