In September 2019, security forces deployed in the anti-Naxal combat grid launched a massive operation to search and defuse Improvised Explosive Device (IEDs). This operation was undertaken because in the last three years more than 260 troops had been killed or injured due to IED blasts. 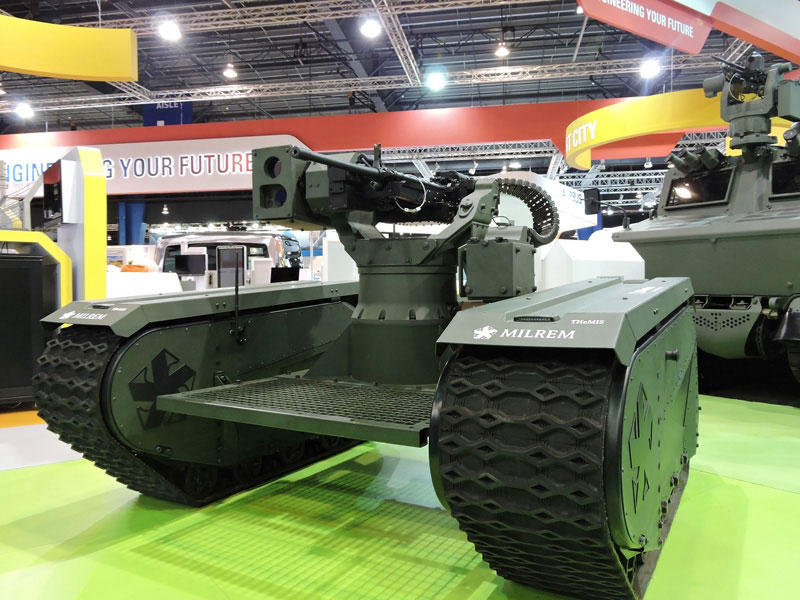 In the recent past, the attackers have been relying heavily on IEDs against the troops in Left Wing Extremism (LWE) areas and Kashmir. IEDs are not only easily accessible but they make up for the lack of manpower. The nature of these devices is lethal. They are either buried under the roads, or hung on trees or just simply put behind posters and pamphlets.

The Central Reserve Police Force (CRPF), India’s largest paramilitary force, are at the forefront of fighting LWE. Although they travel in Mine-Protected Vehicles (MPVs), the landmine blasts destroy the vehicles and kill security personnel. In 2011, the then director general of CRPF, K. Vijaykumar called the MPVs “coffin on wheels” but also appreciated them for being an effective means of transport and a repellent against ballistic missiles. MPVs are produced to withstand ‘pressure’ IEDs that generally have 5-7 kg of explosives. The destructive explosions are stuffed with ‘trigger’ IEDs that have at least 20-30 kg of explosives.

In September 2019, 20 kg of IED, which was planted under a road near a police station, was recovered and the blast averted. In April 2020, a part of a bridge was damaged in an IED blast in Sukma. The same month, amid the lockdown, Maoists in Bastar were reported to have laid out IED under the road. When the police received the information from the villagers, District Reserve Guards (DRG) traced the narrow tunnel beneath the tar road. The IED was planned in order to single out vehicles of police and the CRPF at a time when no other means of transport was allowed to move.

After repeated incidents of violence against them, the CRPF have started taking measures to avert casualties. In March 2019, post-February 14 Pulwama terror attack, CRPF DG R.R. Bhatnagar had said that they were procuring a new fleet of 30-seater MPVs in order to armour plate them and also enhance the number of Bomb Detection Disposal Squads (BDDS) for anti-terror duties. The CRPF also increased seats at their Pune-based Institute of IED Management school in order to train more personnel in detection and disarming of such bombs.

Similarly, in March 2020, over a dozen helicopters, operating in the country’s anti-Naxal grid, were retrofitted by the CRPF with air ambulance-like facilities for the troops, so that no time is wasted in reaching the hospital. Even though the CRPF have fixed-wing air ambulance, they need a tarmac or landing strip, making it tough to use them in emergency. That’s why it was felt that helicopters would be ideal in such situations.

The necessity of improving IED detection is more than ever as attackers are increasingly making use of these, causing huge casualties and deep psychological effects on the CRPF personnel. In the past, the CRPF have deemed the IEDs their ‘worst fears’ and ‘biggest enemy’. In order to safeguard these areas, security has to be deployed and they need modern equipment at hand. Even though the convoys are led by Road Opening Parties (ROPs), many a times the IEDs may go undetected as they may be laid under pucca roads. All that they carry are mine-sweepers and sniffer dogs for sanitising the roads.


In 2018, military adviser in India’s Permanent Mission to the UN Colonel Sandeep Kapoor had said that an analysis of the fatal casualties among security personnel in the last four years indicated that at least a quarter of them were due to IED attacks. He had also said that there was a requirement for dedicated counter-IED resources.

De-mining is a dangerous and slow process which the security personnel undertake with handheld detectors. Often it has happened that when the ROPs pass through forests they are attacked and killed by the Naxals. These incidents have repeatedly proven that this may not be the best method of detecting IEDs. Even in the recent incident that took place in Sukma in March 2020, around 250 heavily armed ultras ambushed the security personnel and started a gun battle while the former were patrolling teams near Minpa village. About 17 jawans died and 14 were injured. In the same district of Chhattisgarh, 11 personnel were killed when Naxals ambushed an ROP in March 2017. To make the life of security personnel safe, India needs better equipment that may allow distancing from the IEDs.

MBDA, a European missile and missile systems company, manufactured VDM route clearance vehicle for countermining in 2010. VDM is capable of clearing route of 150 km in one day with a speed of 25 kms per hour. It is a vehicle that is useful in securing the convoy and opening up main routes during combat operations. It has active decoys controlled by the crew. The official description by MBDA on their website reads, ‘This modular vehicle can operate within a combat engineer detachment as a counter-IED system dedicated to the clearing of IED threats during route opening missions. The VDM is blast resistant and is easily and fast repairable during the mission. The existing configuration provides a good level of protection for the crew through standoff activation of the threat and a protected cabin against ballistic threat and blast.’

Raytheon, UK, developed an integrated robotic platform—GroundEye sensor system—for detecting buried IEDs. It is able ‘to view, in real time, the exact position, orientation, size and shape of all individual components of an emplaced or suspected IED or other buried threat with extremely false alarm rates.’ Milrem’s Tracked Hybrid Modular Infantry System (TheMIS) is an unmanned, integrated robotic platform that features Raytheon’s IED detection sensor system GroundEye. It is the first fully modular unmanned ground vehicle. ‘In addition to the IED sensors the vehicle can carry a remote weapon station with large and small calibre weapons for reconnaissance with different sensors attached to it or simply as a support vehicle that carries a squads gear.’ It can carry a payload of 750 kg at 25km/h up to 1.5 km away from its operator. 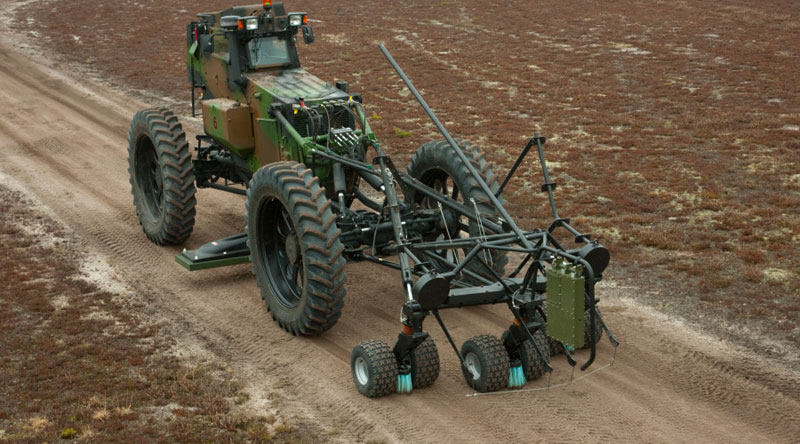 Raytheon also has Soteria, a vehicle-mounted stand-off system that offers HD IED detection, confirmation and threat diagnostics from a distance. It can detect high, medium, low and zero metal content IEDs and offers day and night operability along with assisted target recognition.

Peace Keeping Security Vehicle (PKSV) is a 4×4 armoured vehicle by General Dynamics Land Systems (GDLS) and can be configured for different purposes like command and control, ambulance, recovery, troop transport, explosive ordnance disposal (EOD) vehicle and C-IED vehicle. It is equipped with two-piece windshield assembly with ballistic glass. It has a ground clearance of 35 cm and a kerb-to-kerb turning circle diameter of 17cm. It has enough space to accommodate 10 soldiers including the driver along with their equipment.

Lockheed Martin in 2006 fielded its first Radio-Controlled Improvised Explosive Device Defeat (RCIED) system. The company then came up with the Next Generation Symphony Radio-Controlled Improvised Explosive Device Defeat System that was designed to defeat current and emerging threats by the IEDs. Lockheed’s Symphony 40, most advanced in its series of C-IED, provides enhanced capabilities. It has open architecture system developed with the latest technologies. This system simultaneously jams select or multiple electronic signals used to trigger a radio-controlled (RC) IED. The jammer, which is vehicle-mounted provides continuous coverage across the threat spectrum and includes updated capabilities for effectiveness, security and response. The US Navy in 2016, approved Symphony Block 40. Versions of earlier model, Block 10/20 are being used in Iraq and Afghanistan.

Cobham Antenna Systems, a British company and Vallon GmbH, a German company in partnership have developed and manufactured Minehound VMR3 which is a handheld dual-sensor detector. The product offers Cobham’s Ground-Penetrating Radar (GPR) technology with Vallon’s Metal Detector (MD). The features of this product are that it is ‘lightweight and robust, ultra-high sensitivity, intuitive user interface with visual, audio and vibration detect alarms, choice of operating modes- GPR, MD or dual sensor, easy to use-low training burden.’

In 2016, Vallon had announced that it would bring the Dual Technology Mine Detector (DTMD) to India under the ‘Make in India’ programme.

Cobham has also developed Minehound lite to provide GPR at a commercial build standard, meaning a physically lighter detector. Their Amulet Robot allows remote mine detection and can be used when the risk of deploying a de-miner is too high. For example during the night or in inclement weather conditions. Amulet Unmanned Arial System (UAS) deploys the GPR on a small UAS. This will allow the deployment of GPR remotely, saving the human de-miner high risk or inaccessibility. It creates a map of minefield as it operates, reporting in real time.

Elbit Systems has developed a modular, programmable multi-brand radio-frequency jammer which denies the opponent use of selected portions of the RF spectrum. The jammer has to be vehicle-mounted and is controlled by the driver, using a Remote Control Unit (RCU). The system needs to be reconfigured by uploading new ‘waveform’ software using an external laptop connected to the RCU’s ethernet port. It operates as a waveform jammer. This system can be installed in a variety of vehicles using the appropriate Vehicle Installation Kit (VIK) which comprises a primary unit to be mounted in a transit case, an RCU and an antenna. Another jammer that the Elbit Systems has developed is portable jammer in a suitcase. It can be either handheld or vehicle-mounted.

ECLIPSE system by Thales is built around a new-generation jammer that prevents IEDs from being detonated by remote control. After detecting the IED, ECLIPSE jams radio signals across a wide range of frequencies without interfering with the radio communication systems used by friendly forces. It is a compact device to be integrated on board any type of light or armoured vehicle. ECLIPSE comes under Smart Electronic Protection System For Vehicles. STORM-H,  a second type of C-IED that the company offers is for soldiers and comes under Smart Electronic Protection System for Soldiers. It is an ultra-compact, lightweight personal ECM system based on proven technology that provides dismounted soldiers individual protection to counter RCIED.

Thales also has the Thales Bushmaster which is a Protected Mobility Vehicle. It is mobile, ballistic, mine and IED blast resistant. The hull of the vehicle is a fully-welded steel, constructed for deflecting the pressure of an exploding mine. It is equipped with an interrogation arm designed to help the crew uncover, investigate and examine suspect items such as IEDs from impacting the Bushmaster. Each arm is fitted with a camera and metal detector to assist in this activity.

There are several other companies globally that are making counter-IEDs. Most armies make use of these equipment as IEDs cause huge damage to human lives. Armies around the world make use of C-IEDs falling in different categories. Robots, Soldier Worn Protection, Armoured/Mine-Resistant and Counter-IED Vehicles, Electronic countermeasures, Detection Systems, Unmanned Systems and Persistent Threat Detection System (PTDS) are the categories.

The CRPF operate in multiple theatres all over India. While training and morale maybe their ‘backbone’ and they may be experts in Jungle Crafts and Survival, the future is definitely not dependent on just that. The way forward is through the use of technology. The nature of warfare is changing. Technology is proving to be more convenient, not just to the militaries but also to notorious groups who the forces fight every day. The magic of dialogue will work its way when it has to, but for now, every soldier must have handy modern equipment and training to use that equipment.