The film began with a fighter aircraft taking flight. By the first five frames of the film, the Air Force’s theme for this year’s Air Force Day was clear—Atmanirbhar and Saksham (self-reliant and able). The seven-minute short film played soon after the new Air Chief, Air Chief Marshal V.R. Chaudhari went up to the stage and greeted the audience. The film walked the audience through 89 years of the IAF’s journey by showcasing different aircraft in its fleet over the years. The movie also conveyed how the air force was increasingly equipping itself with Indian aircraft and defence systems such as missiles, radar systems, AWACS and swarm drone technology to ‘fight future wars’ among others, in accordance with its theme. 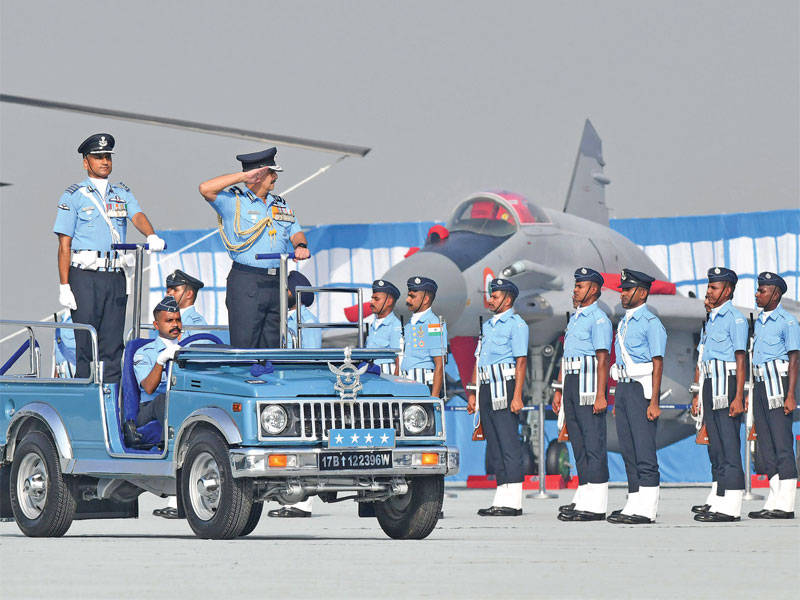 The film spoke of a number of exercises that the IAF undertakes with different countries around the world. The video emphasized that ‘IAF’s role in Ladakh region, bordering China, was extremely crucial’ with visuals of Apache helicopters flying sorties in the region in the background. The video also showed visuals of HADR ops that the air force undertook while the Covid19 virus was on rampage, and even recently when Indians had to be evacuated from Afghanistan after the Taliban takeover.

After the film ended, the Chief spoke about the force’s future trajectory in terms of challenges and technologies. At the event, the audience was seated on alternate seats and care was taken that the auditorium was not jam packed with attendees. Journalists from other popular media were present at the event.


“Since its birth in 1932, the Indian Air Force has come a long way in having transformed into a potent combat ready air force with the ability to conduct air operations across the entire spectrum,” he said. Without mentioning China’s growing aggression, the air chief said, “The past few years have been unprecedented on many counts and those series of events have brought forth several unique security challenges. An uncertain and rapidly changing geopolitical environment makes it incumbent for all components of our national security architecture to be ready to respond proactively. The disruptive nature of new technology along with access to low-cost options for recognising them presents an entirely new battle space. It expands well beyond the traditional domains of land, sea, and air.”

“Mindful of the critical role that aerospace plays in any security scenario, the IAF has been moving ahead steadily on a transformational path aimed at the enhancement of critical capabilities and building war fighting potential. We stand on a threshold of an era that will define the way aerospace power is employed in multi domain operations,” he added.

Speaking of procurements, he said that IAF was in the process of acquiring new combat systems, upgrading and modernising the existing inventory of aircraft and weapon systems. “This,” he added, “is being done with an aim to ensure that we retain a technological edge over our adversaries.” The recent induction of Rafale, Chinook and Apache aircraft has added significantly to the combat potential. The offensive strike capability, according to the Air Chief, has become even more potent with the integration of new weapons on the fleets, which are supported by robust command and control networks. India should get its first batch of S-400 missile systems ‘within a year.’

During the presser, the CAS said that no two-finger test was carried out on the woman IAF officer who alleged that she was raped by her male colleague flight lieutenant Amitesh Harmukh at the Air Force Administrative College in Coimbatore.

“Let me assure you that the air force law is very strict on any such incidents. We have no latitude for misconduct or moral turpitude. The two-finger test is misreported. The actual fact is that this has not been done. And I can confirm to you that this test was not done. We are well aware of the rules. All actions, all disciplinary actions that will come out from this inquiry, will be taken,” he said.

The two-finger test was banned by the Supreme Court in 2013 as violation of privacy. In 2014, the Centre had issued guidelines against the test.

She told the police that after her complaint she was sent to the Air Force Hospital where two women doctors asked her about her ‘sexual history’. The woman said that one of the doctors inspected her private parts and conducted the two-finger test. In her complain, the victim accused the IAF officers at the facility of harassing, intimidating and threatening her.

Later, the additional Mahila court in Coimbatore handed over the custody of the officer accused of rape to the IAF, after the force approached the local court, demanding that the accused, since he is a serving officer, be handed over to it to stand trial in general court-martial proceedings in line with provisions of the Air Force Act, 1950.

In her complaint, the officer had stated that her colleague entered her room when she was asleep, hours after all the officers had shared drinks at the officers’ mess bar at the institute and forced himself on her. She claimed that her roommate and another colleague video-recorded the accused admitting to the crime.