The defence ministry is planning to introduce changes in the open general licence norms in order to boost exports. This was revealed by the Sanjay Jaju, joint secretary, defence industries production who was speaking at a defence industrial workshop conducted by the Federation of Indian Chambers of Commerce and Industry (FICCI). The day-long workshop held on 17 June 2019 saw representatives from defence industries from across the country participate. Jaju said the Central government was working on two open general export licences, and the whole process of permissions will be simplified. 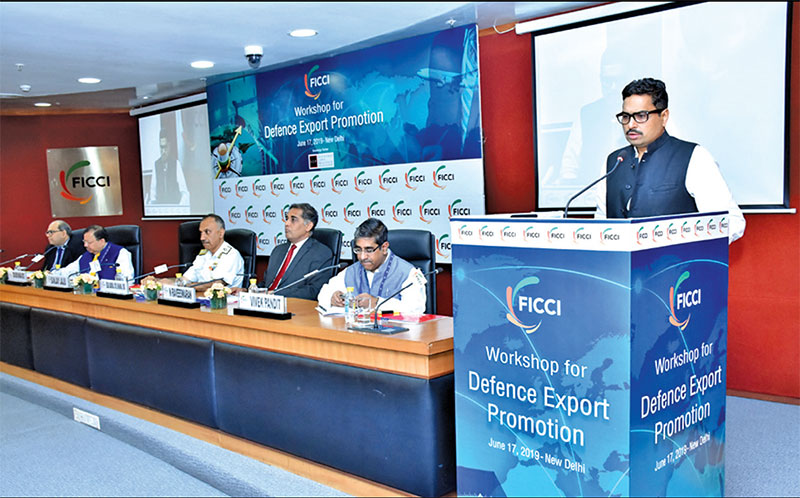 He said the government is committed to establishing a system in which Indian exporters will have the opportunity to give self-declaration of their quarterly or yearly statements for a select group of countries. “We are trying to come up with a solution where an open general export license for certain products to certain countries will be issued. Those companies which register under particular license can export these items and give us declaration over a quarter, or a month or a year, and maintain records at their own premises,” he emphasised.

India’s defence exports had doubled in the last few years, jumping from Rs 1,500 crore in 2016-17 to Rs 11,000 crore in 2018-19, with 90 per cent of the products as components. Jaju said the figures will keep rising significantly as the industry accesses new international markets. He stressed on the fact that the aim was to have one-fourth of the turnover of defence public sector undertakings through exports.

With over Rs 5,000 crore worth of exports, the US was the biggest contributor to Indian exports, followed by countries like Israel and many other European countries. Government officials at the event credited the increase in exports to recent policy changes, saying the new procedures and policies made it easier for companies to get official permissions.

Jaju further said that out of a trillion-dollar manufacturing economy in the next five years, USD 25 billion must come from defence-related sectors. Consequently, the expectations are about USD 5 billion worth of defence exports each year. However, he said that Indian exporters need to diversify the product line to be internationally competitive. “It is important that we are competitive and able to provide good value for money to the buyer,” he said.


Additional director general quality assurance (Naval), DGQA, ministry of defence, RAdm Atul Khanna, who was also present on the occasion, said the Indian defence industry is currently through major changes. He said that while the demand side was moving faster, the catch-up between demand and production is not happening. However, the recent policy-level changes will ensure the next decade turns the tide, he expressed hope.

Cmde Mukesh Bhargava (retd), member – national defence committee, FICCI, also said the defence is a priority sector for the government under the ‘Make in India’ plan.

The other speakers at the event also voiced their opinion on the export potential. Associate director at Economic Laws Practice, Karishma Maniar, said that the industry needs investment in research and development, production facilities and quality standards to compete on platforms globally, coupled with strong export compliance programmes and intellectual property right protection measures to ensure defence exports continue to be a long-term success story.

The purpose of the workshop was to familiarise companies looking to export their products with common practices and procedures relating to export of defence/dual use items, as well as familiarise them with the support offered by the ministry of defence (MoD) for exporting their products (schemes, using the defence investor cell, export markets etc.). The government officials answered all the questions raised by industry representatives about online procedures for licensing applications and other things.