Following a 71-month construction-plus-sea-trial effort, the People’s Liberation Army’s Navy (PLAN) commissioned its first domestically-built aircraft carrier, the Shandong CV-17, at the South China Fleet’s Yulin Naval Base, on China’s Hainan Island, five years after the PLAN’s first aircraft carrier, the Liaoning CV-16 (whose hull had been built in Ukraine in the late Eighties) was commissioned (on 25 September 2012). The Shandong has a length of 315 metres, width of 75 metres, draught of 9 metres, and cruising speed of 31 Knots. It is also credited with a standard displacement of 70,000 tonnes and a full displacement of 82,000 tonnes.

Both the Shandong and Liaoning are similar in size and use a Short Take-Off But Arrested Recovery (STOBAR) system for the launch and recovery of aircraft. However, the island of the Shandong is approximately 10 per cent smaller than that of the Liaoning, which provides additional deck space. But like the Liaoning, the Shandong too is limited to six days at sea before refuelling. The Shandong’s aircraft complement comprises 27 fixed-wing combat aircraft (J-15 ‘Flying Shark’ heavy multi-role combat aircraft, or H-MRCAs) and 15 helicopters, while that of the Liaoning is 24 H-MRCAs and 17 helicopters.


The J-15 H-MRCAs, however, due to their weight, cannot be armed in the ‘swing-role’ configuration and hence, they come with three distinct weapons configurations: with four PL-12 BVRAAMs and four PL-8 SRAAMs for air-defence; with two AKD-88 air-to-surface cruise missiles containing optronic terminal guidance seekers, and a data-link pod; and with two YJ-91 (Kh-31P Krypton) anti-radiation missiles. This is because although the J-15 has a maximum weapons load capacity of 6,500kg, the STOBAR takeoff procedure cuts into the J-15’s rate of climb and reserve power margins (see FORCE January 2018, pages 64-65). 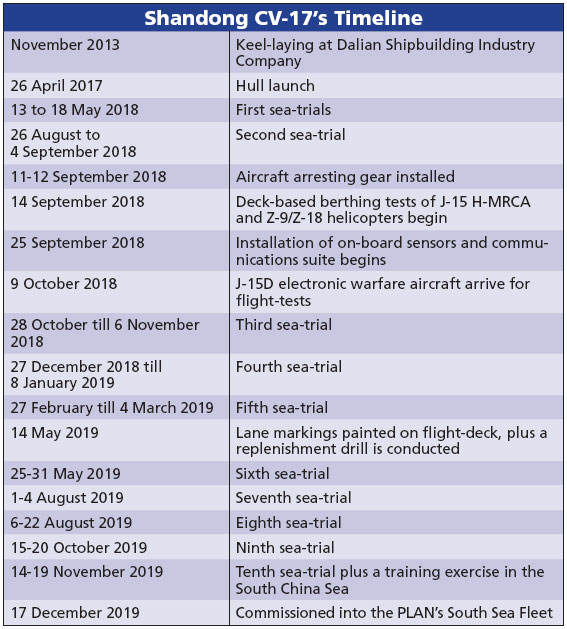 It will take another four years for the Shandong to be declared as being ‘combat ready’. Earlier, the Liaoning had become ‘combat ready’ in November 2016, following which the PLAN in mid-December 2016 had conducted the first live-fire drills involving the Liaoning. Since September 2018, the Liaoning has been undergoing its first major periodic refitting by the Dalian Shipbuilding Industry Company (DSIC).

Meanwhile, hull construction of the PLAN’s third aircraft carrier, the Type 003, is presently underway at the Changxingdao Island-based shipyard owned by Shanghai-based Jiangnan Shipyard Co Ltd. The Type 003 will feature a hull 330 metres long and 76 metres wide, draught of 11 metres, standard displacement of 88,000 tonnes, full displacement of 101,800 tonnes, a propulsion package comprising two sets of main turbines, for a total of four turbines, which will connect with four shafts delivering 260,000 hp. Total power output will be 194 megaWatt electric (mWe) and a cruising speed 33 Knots. There will also be four sets of emergency diesel engines for a total of 8mWe. The Type 003 will have on-board 70 fixed-wing combat aircraft and helicopters, plus up to four JZY-01 AEW aircraft (derived from the Sukhoi Su-80 STOL aircraft), which means the Type-003 will have a CATOBAR flight-deck for which domestically-developed electromagnetic aircraft launching catapults (E-MALS) will be used. 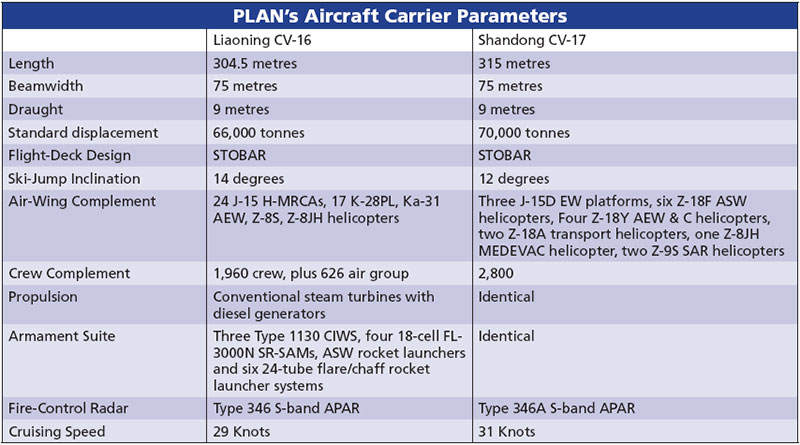